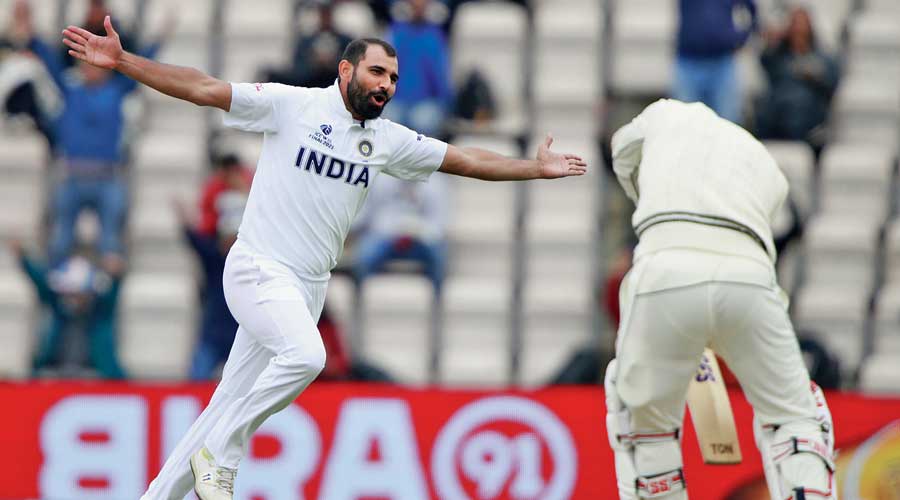 Mohammed Shami, after dismissing BJ Watling (right) on the fifth day of the World Test Championship final in Southampton on Tuesday.
AP/PTI
Indranil Majumdar   |   Published 23.06.21, 03:17 AM

For most of Tuesday, it wasn’t about India versus New Zealand at the Ageas Bowl in Southampton but about Kane Williamson’s long vigil that threatened to push the World Test Championship final beyond the grasp of Virat Kohli’s men.

The New Zealand captain waged a lone battle against a disciplined and potent Indian pace attack until Mohammed Shami and Ishant Sharma combined to stop the Black Caps’ ascendancy.

With two days washed out, India wiped out the 32-run deficit by close on the fifth day to go ahead by the same margin. Play now moves to the reserve day — Wednesday — with all three results possible on a deteriorating wicket.

After Shubman Gill’s departure, Tim Southee brought one back sharply to trap Rohit Sharma in front to throw the Test wide open.

With no rain forecast for Wednesday, New Zealand will hope to trigger another Indian collapse in the opening session on Wednesday. For India, it will be about playing catch up.  “We need to get enough runs as back-up and then think of going for the kill,” Shami said.

This match has not been short of the thrills and twists that Test cricket offers to make it the most exciting format for the purists. It tests a batsman’s skills and temperament with no shortcuts on offer. The top two teams in the world showed the intent and application while throwing up surprises in their own intriguing ways.

Williamson once again showed why he is regarded among the best. None of the bowlers could breach his defence or trouble his concentration.

The opening session on Tuesday was a matter of survival in perilous conditions and the Kiwi captain was up to the task as he took 75 balls to score seven runs. It was only after lunch that Williamson opened up.

He exhibited all the virtues of Test batsmanship. Ishant even struck him in the midriff with one that rose and left him cramped for room while trying to defend. That apart he played the ball as late as possible and met everything the Indian bowlers offered with confidence for 294 minutes during his innings of 49.

After an hour’s delay on Tuesday morning, the Indians began with Ishant and Jasprit Bumrah to trouble Williamson and Ross Taylor with the incoming delivery. But it was not until Shami came into the attack that the Indians managed to strike the right length.

Shami’s fuller length made it more easier for him to extract the swing in cold and blustery conditions. He forced the batsman onto the front foot, which finally helped him remove Taylor, who snicked while driving.

The Indians certainly felt the absence of a genuine swing bowler like Bhuvneshwar Kumar. Even a Mohammed Siraj would have been useful. The Indian pacers mostly rely on seam to derive lateral movement.

Ishant (3/48) and Shami (4/76) then combined to remove Henry Nicholls and BJ Watling within a space of four deliveries. Credit should also go to some excellent catching, both in the outfield and slips, by the Indians.

Once Williamson guided Ishant into the hands of second slip, it was left to Tim Southee to accumulate some useful runs towards the end.