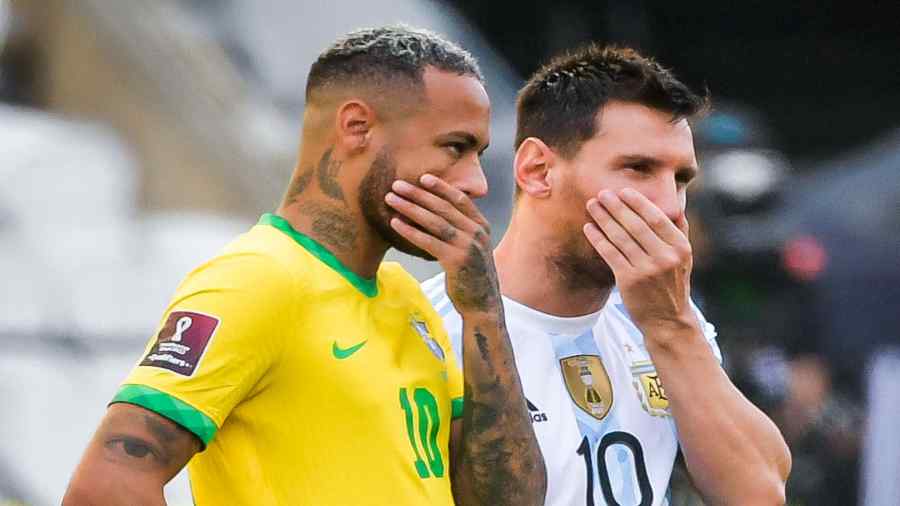 A World Cup qualifier between Brazil and Argentina was suspended amid chaotic scenes after local health officials walked onto the pitch in a bid to remove three players who didn't comply with coronavirus restrictions.

The match featuring Argentina's Lionel Messi and Brazil's Neymar was stopped in the 7th minute because of the extraordinary interruption on Sunday. The referee eventually suspended the game with the score at 0-0 after players, coaches, football officials and local authorities argued for several minutes on the field at NeoQuimica Arena.

Brazil's health agency said three of Argentina's England-based players should have been in quarantine instead of playing in the match. FIFA will have to determine what happens next with the qualifier.

The four had been ordered to quarantine by Brazil's health agency ahead of the match. Despite that order, three of the four started for Argentina.

Aston Villa's Emiliano Martinez and Emiliano Buendia and Tottenham's Giovanni Lo Celso and Cristian Romero joined the Argentina squad despite the Premier League not wanting players to be released for international duty because of the need to quarantine for 10 days in a hotel on their return. Brazil's quarantine restrictions have added another complicating factor.

The Argentina football federation on Sunday night tweeted the message: "We are going home! along with a picture of the squad, including Emiliano Martinez and Buendia, boarding a flight for Buenos Aires.

TV Globo reported that the four England-based players told Brazilian police at the airport they did not fill their entry forms upon arrival. The report said the footballers were not deported and received permission to fly back with their team.

Brazil's health agency said all four allegedly told immigration officers that in the previous 14 days they hadn't been to Britain or anywhere else that Brazil puts on its own red list for Covid-19 risks. Those who have been in countries on the so-called red list face a 14-day quarantine in Brazil.

Anvisa said there'd been a meeting Saturday involving regional and national football representatives to discuss the quarantine situation. At that meeting, Anvisa and local health authorities determined the players should quarantine, according to Anvisa.

However, even after the meeting and the report to authorities, the players took part of Saturday evening's training session.

The agency added that attempts earlier Sunday to remove the players and take them to the airport were frustrated.

The decision to interrupt the match was never within Anvisa's reach. However, fielding players who did not comply with Brazilian laws and health norms, and also offered false information to authorities did require the agency to act, at its time and its way," the Brazilian agency said.

Brazilian TV showed several exchanges between players and coaches during the chaos. Brazil coach Tite seemed to be the most upset.

They had 72 hours before the match. They had to do it at the time of the match! Tite shouted to the Anvisa agents.

Lionel Messi also sounded irritated. "They did not talk to us before this," the Argentine captain repeated.

Brazil called up nine Premier League players for the World Cup qualifiers in September but none of them traveled to South America because of the restrictions.

Argentina coach Lionel Scaloni said both teams would have liked to play the game.

"A match between some of the best in the world ends like this. I would like people in Argentina to understand that as a coach I have to take care of my players. If people come and say they have to deport them, I will not allow," Scaloni told channel TyC Sports.

"We wanted to play the match, so did the Brazilians."

Both national soccer associations issued statements to criticise the move by Brazil's health agency. Brazil players stayed on the field after Argentina left, and started doing training exercises. Argentinians, including those considered to be a COVID-19 risk, stayed for more than three hours in their dressing room until they left for the airport.

Romelu Lukaku celebrated his 100th international with a goal as Belgium opened up a six-point lead after a 3-0 win against the Czech Republic in World Cup qualifying.

"The players did exactly what I asked of them," Belgium coach Roberto Martinez said.

"But we need to stay focused for the next game." That game is against Belarus on Wednesday, when Wales hosts Estonia.

Lukaku scored in the eighth minute at King Baudouin Stadium, his 67th goal for the national team. Eden Hazard doubled the lead shortly before halftime and Alexis Saelemaekers put the result beyond doubt with a goal in the 65th.

Belgium leads the group with 13 points. The Czechs are second with seven, a point ahead of third-place Wales which has played two fewer games.

After going nearly two years without an international goal, Bale extended his record Wales goals tally to 36 in 98 games.

Everything was against us," Bale said. "It was not a good first half whatsoever, but I felt in the second half we really changed it and got on the front foot.

The Real Madrid forward had missed from the penalty spot against Turkey at the European Championship this summer.

The game was switched to Russia as Wales was unable to enter Belarus by air due to sanctions against the Minsk government.

Belarus has three points. Last-placed Estonia is on zero points.