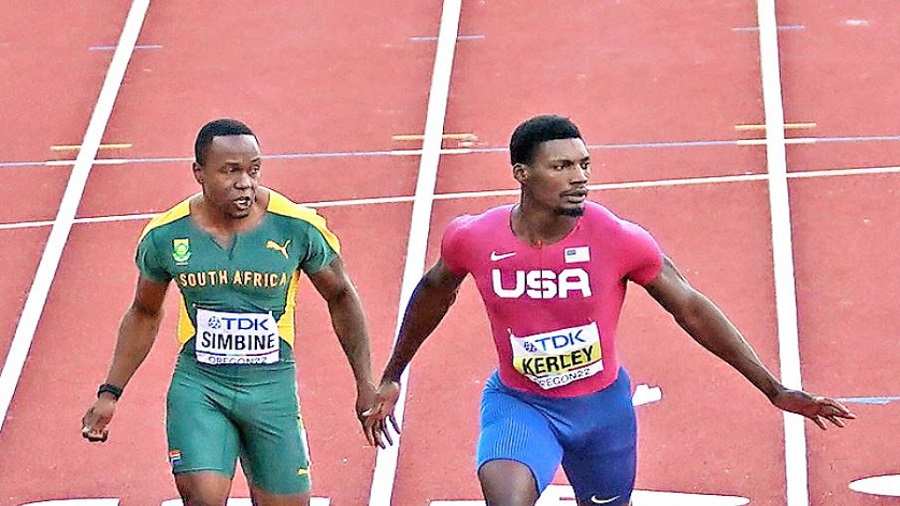 Fred Kerley led an American clean sweep in the men’s 100 metres final at the World Championships in Eugene, Oregon, on Saturday. Kerley, the Tokyo Olympics silver medallist, timed his dip perfectly to clock 9.86 seconds and pip compatriots Marvin Bracy and Trayvon Bromell in front of an underwhelming home crowd at Hayward Field.

It marked the first American sweep at worlds since Carl Lewis, Leroy Burrell and Dennis Mitchell went gold-silverbronze at the 1991 championships in Tokyo. “We said we were going to do it and we did it,” Kerley said in the on-track interview, moments after the crowd finished chanting “USA! USA! USA!” “It’s amazing to do it on home soil with the home crowd behind us. It’s a wonderful blessing to get a clean sweep,” said Kerley, who had run the fastest-ever World Championships heat on Friday with a scorching 9.79. Bracy edged Bromell for silver by two thousandths of a second after both ran 9.88. Another American, defending champion Christian Coleman, finished sixth.

Despite having four runners in the final, Bracy said getting three on the podium was easier said than done. “To say it is one thing, to do it is another. We knew it was very much possible,” he added. “It was about three guys getting on the same accord.” Italy’s Olympic 100m champion Lamont Jacobs, who has battled a thigh injury for several weeks, pulled out of the semi-finals earlier on Saturday.

Ealey shines Shot putter Chase Ealey’s red, white and blue nails along with her matching make-up paired well with this: Team USA’s first gold medal. Not a bad early birthday present, either. Ealey, who turns 28 in four days, ended up winning the event on her first attempt on Saturday night at Hayward Field.

Her opening toss went 67 feet, 2¾ inches (20.49 meters) and dethroned two-time defending world champion Gong Lijiao of China. By a matter of minutes, Ealey earned the honour of first American gold at the inaugural World Championships held in the US. Moments later, Fred Kerley led an American sweep in the 100.

“I haven’t quite absorbed the information that it’s happened,” said Ealey, who became Team USA’s first world outdoor champion in the women’s shot put. “It just feels really good.” To remind herself to relax and breathe at big meets, Ealey glances at her forearm. She has “breathe” tattooed on it.  This competition certainly left her breathless. China did manage to win gold in the men’s long jump, Wang Jianan producing a lastround leap of 8.36m to snatch the title away from Tentoglou Miltiadis.

In the men’s hammer throw, Poland’s Pawel Fajdek produced the best throw of the year to become only the second athlete to win five back-to-back world golds, after pole vaulter Sergey Bubka, who ultimately went on to win six successive titles. Olympic champion and compatriot Wojciech Nowicki briefly held the lead after his third attempt but could only move one place up the podium from his three previous world bronze medals, while Norwegian Eivind Henriksen took bronze this time. A stoney-faced Fajdek had a disappointing first throw but ran away with the competition on the third try, letting out a roar as he hit a mark of 81.98 metres.

Endurance icon Sifan Hassan wasn’t going for three medals this time. Now, she won’t even get two, and she’s OK with that.  The Dutch distance workhorse got outraced to the line in a fight-to-the-finish 10,000m. She finished fourth, behind Letesenbet Gidey of Ethiopia, Hellen Obiri of Kenya and Obiri’s late-charging teammate, Margaret Chelimo Kipkemboi. Gidey won in 30 minutes, 9.94 seconds. Only 0.62 seconds separated the top four runners.