Chasing a 272-run target, the hosts scored 36 for 2 in 15 overs before stumps were drawn for the final time in the four-day match 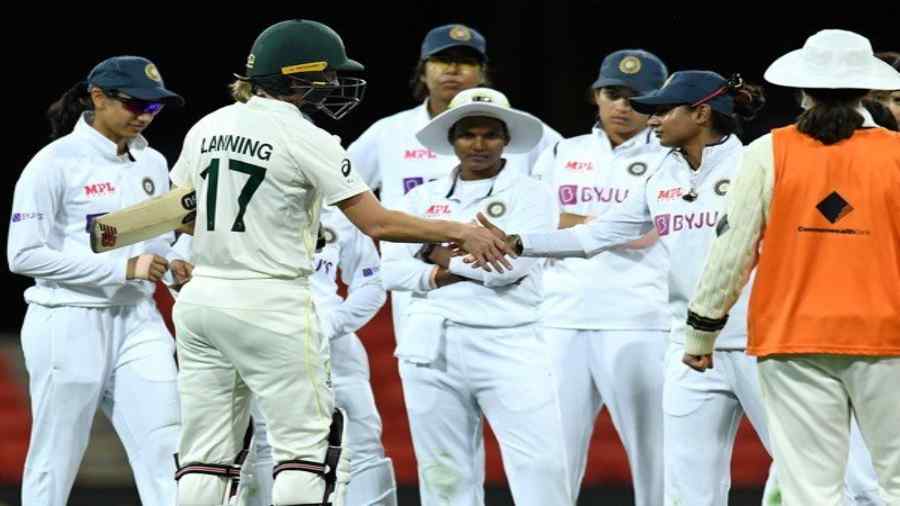 Indian women's team put up a highly commendable performance, dominating Australia for the better part in its maiden Day/Night Test, which ended in a draw primarily due to inclement weather during the first two days.

Resuming the day at 143 for three, Ellyse Perry (68 not out) and Ashleigh Gardner (51) went on to share an 89-run stand before Indian pacers triggered the batting collapse, reducing Australia to 241 for nine from 208 for four.

What followed was an interesting declaration from Meg Lanning at the stroke of dinner.

India, who made 377 in their first innings after being asked to bat, played 35 overs in second innings before declaring after tea to set Australia an improbable 272-run target in just 32 overs. Shafali Verma made a fine 52 off 91 balls while Punam remained unbeaten on 41 off 62 balls.

India passed up the opportunity to press for victory on the final day as the one-off day-night Test against Australia in Carrara ended in a draw.

The target was virtually out of reach for Australia who lost Alyssa Healy and Beth Mooney cheaply. Australia were 36 for two in 15 overs before players of both teams shook hands to settle for a draw.

As per rules of multi-format series, both teams settled for two points. The series score stands at 6-4 in Australia's favour.

More than 80 overs were lost due to weather over the first two days, making draw the most likely outcome of the four-day match.

India could have declared at tea with 242-run lead and 41 overs to bowl but they didn't want to leave anything to chance and took the safety-first approach.

India, who came into the game with only two practise sessions with pink-ball, outplayed the Australians in all departments. It was the first time in 15 years that two teams played a Test.

Smriti Mandhana struck a memorable hundred to set the foundation for India's big total before the pace trio of Jhulan Goswami, Meghna Singh and Pooja Vastrakar put the Australian batters under pressure.

It would be fair to say that the Indian fast bowlers got more out of the drop in pitch than their Australian counterparts.

Debutant Meghna impressed with her swing bowing, 38-year-old Jhulan was relentless as usual and showed age was just a number and Pooja as first change provided no respite to the batter.

India reached 106 for two in their second innings at tea. First innings centurion Mandhana (31 off 48) fell to a fantastic catch in the deep by Ashleigh Garnder.

Yastika Bhatia (3) was then promoted to number three to push the scoring rate but she could only last 12 balls.

In the first session, India pacers made the new pink ball talk before an under pressure Australia made an interesting declaration.

In what seemed as an attempt to move the game forward, Meg Lanning declared the innings before her team could be bowled out.

While Deepti Sharma got rid of Gardner, Meghna once again troubled the batters with her outswingers as India took four wickets after the second new ball was taken in the 81st over.

Perry, who averages more than 78 in Test cricket, could have been out as many as three times but had the luck on her side. While one was a close leg before shout, she was also dropped twice.

Meghna took her maiden wicket with a beautiful outswinger to have Annabel Sutherland caught behind. Her second wicket was Sophie Molineux, who was foxed by another outswinger (inswinger) to the left-hander.

Pooja had Georgia Wareham caught behind before offie Deepti took her second wicket of the day with an arm ball to dismiss Darcie Brown.