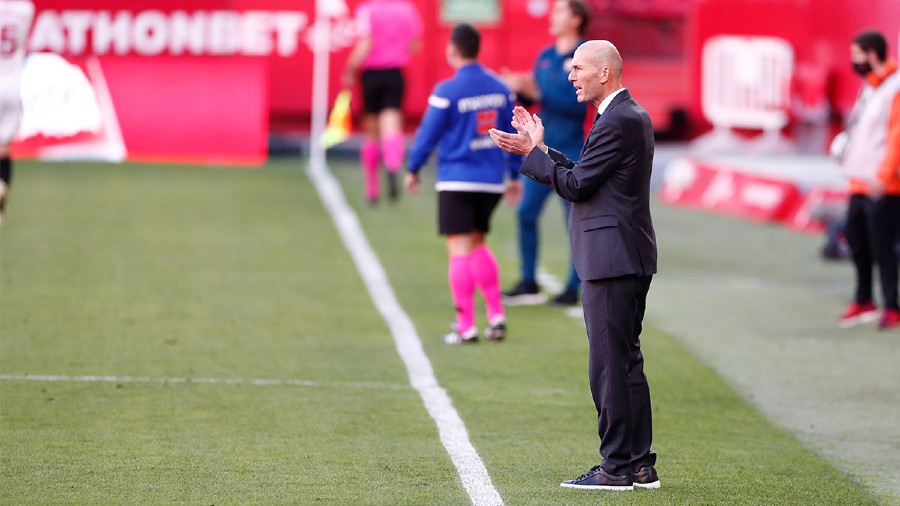 Real Madrid coach Zinedine Zidane insisted he is not contemplating losing his job if his side fail to progress from the Champions League group stage.

The 13-time European champions, who have never failed to make it out of the groups, host Group B leaders Borussia Moenchengladbach on Wednesday needing to better Shakhtar Donetsk’s result against Inter Milan in order to progress.

Local media reports suggest that Zidane will be sacked should Real not go through to the last 16, however the Frenchman insisted his only focus is on getting the three points, rather than his future.

“The club will do what they have to do (in the event of not qualifying), as they always do, but I’m only thinking about the game,” Zidane said.

“I’m not thinking about anything else other than winning. I’m focused on the game and we know what we have to do. It’ll be tough, but we need to be able to walk off the pitch satisfied with our work.

“We know there’s another game going on (Inter versus Shakhtar), but we’re only thinking about our game. We’re up against a tough side who will make life difficult

“We know exactly what the situation is. We want to get the three points and finish top of the group; that’s what we’re all thinking about. All matches are important but this ois a great chance to show what we are as a team.”

Zidane will welcome back captain Sergio Ramos to the side after the defender missed the last six games through injury. Full back Dani Carvajal also took a full part in training on Tuesday, having been absent for the side’s last four matches. However, forward Luka Jovic will miss out after suffering an adductor problem.

Moenchengladbach, on the other hand, only need a point against hosts Real Madrid on Wednesday to book their Champions League knockout spot but coach Marco Rose warned that such calculations count for nothing against the under-pressure Spaniards.

“Such teams (like Real) function best under pressure,” Rose said prior to the team’s departure on Tuesday. “We also saw that against Inter Milan.”

Gladbach could have made sure of qualification last week but instead lost to Inter, desperate for a win, 2-3 at home.

“It will be a tough Real Madrid, that much is clear,” Rose said, with defenders Ramy Bensebaini and Toky Jantschke ruled out injured and Nico Elvedi still in doubt.

Reds’ youth power Liverpool manager Juergen Klopp has hailed his crop of youngsters for seizing their opportunities in recent weeks and helping the Premier League champions cope with the loss of veteran first-team players through injury.

Goalkeeper Alisson and defenders Trent Alexander-Arnold, Virgil van Dijk and Joe Gomez were the bedrock of Liverpool’s title-winning campaign in 2019-20 but have all missed significant portions of the current season, forcing Klopp to dip into the club’s youth system.

Curtis Jones, Neco Williams and Rhys Williams have all made seamless transitions into the first team, with goalkeeper Caoimhin Kelleher deputising for Alisson with two clean sheets in as many games after making his senior debut.

“We had some problems injury-wise and that’s clear — we lost top, top class players to injuries,” Klopp told reporters ahead of Wednesday’s Champions League trip to Midtjylland. “When one door closes another one opens but you still need the right players to use the chance and all of the boys did it.

“I can go through all of the boys — what Rhys has done in the Champions League so far is exceptional, Neco has played two really good games in a row, Curtis plays like he has been at the club for 10 years and Caoimhin was always a talent but he’s now getting the chance to show that on a big stage.

“Without these players, we would have been lost, to be honest. Thank God it turned out the way it did. The big part is that they were really well-prepared, that’s why we’ve been able to use them in the way we have used them.”