He knows how to make use of the crease, pitching the ball in the right areas, and also exploits the variable bounce in the wicket to rattle batsmen 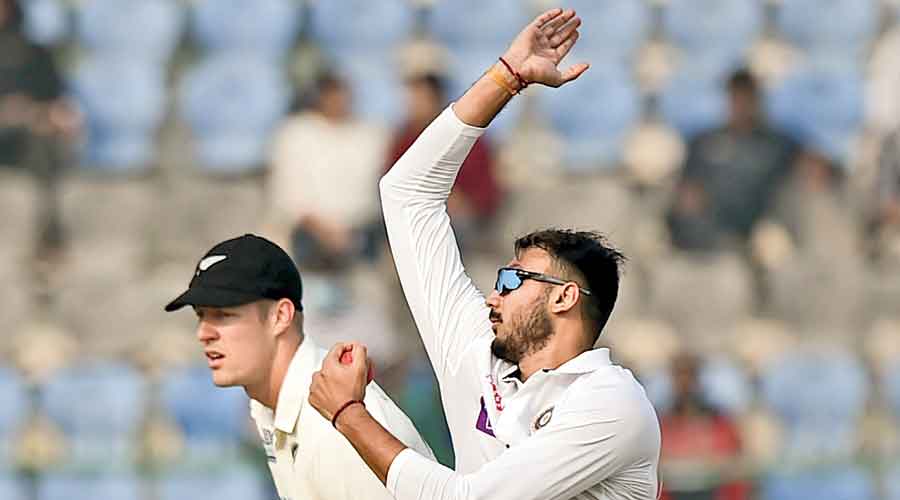 Axar Patel never depends only on the turn to turn things in his favour. He knows how to make use of the crease, pitching the ball in the right areas, and also exploits the variable bounce in the wicket to rattle batsmen. His skills make him a deadly bowler in Indian conditions.

England had a torrid time confronting Axar in Chennai and Ahmedabad earlier in the year, and on this occasion, it was New Zealand’s turn to face the heat from the left-arm orthodox spinner. He took his fifth five-wicket haul in what’s only his fourth appearance in the longest format to put India back on top in the ongoing first Test in Kanpur.

Courtesy Axar’s relentless spell (5/62), India managed to take a decent first-innings lead of 49 on Saturday, bowling New Zealand out for 296 despite a resolute 151-run opening stand between Tom Latham (95) and Will Young (89). At stumps on Day III, India were 14/1 in the second essay, having stretched their lead to 63.

Mayank Agarwal and Cheteshwar Pujara were at the crease after Shubman Gill’s technical flaws were exposed again by Kyle Jamieson, who knocked the opener over for the second time in this Test with one that shaped back in just a little bit.

To be on the safe side, India, from hereon, would obviously like to get at least another 250-plus runs to shut the door on New Zealand, with the cracks on the pitch likely to have a greater effect on the last two days of the game. The delivery that helped Ravindra Jadeja clean up debutant Rachin Ravindra, who was showing intent, was an indication of what could be in store on Days IV and V at Green Park.

For the visitors to keep their chances alive, the onus is on Tim Southee and Jamieson. The two pacers did the job for New Zealand in the first innings as spinners Ajaz Patel and Will Somerville did not manage to put the Indian batsmen under pressure.

Resuming on 129 without loss, New Zealand remained steady at 214/2 midway into Saturday’s post-lunch session. That’s when Axar stepped up, making Ross Taylor and Henry Nicholls commit unforced errors and then having Latham stumped, thanks to sharp work from substitute ’keeper KS Bharat. Wriddhiman Saha did not take the field on Saturday with a stiff neck.

Ravichandran Ashwin’s persistence helped him to break the New Zealand opening duo’s vigil, when he induced an edge off Young’s bat.

That was the breakthrough India badly needed in the day’s first session.

At the stroke of lunch, Umesh Yadav’s superb use of the seam trapped captain Kane Williamson lbw, which certainly helped India breathe easier. Those two strikes by Ashwin and Umesh were critical to say the least, as they gave India the opening they were yearning for.

Latham and Young, back on Day II, were defending confidently during their century-plus stand. But on the third day, with the soft dismissals of Taylor and Nicholls clearly effecting Latham’s tempo, Tom Blundell’s ultra-defensive batting further complicated matters for the Black Caps. Agreed this was Blundell’s maiden Test in India, but being too defensive only allowed the Indian spinners to pile on the pressure.