Third successive title in the global stage for the country 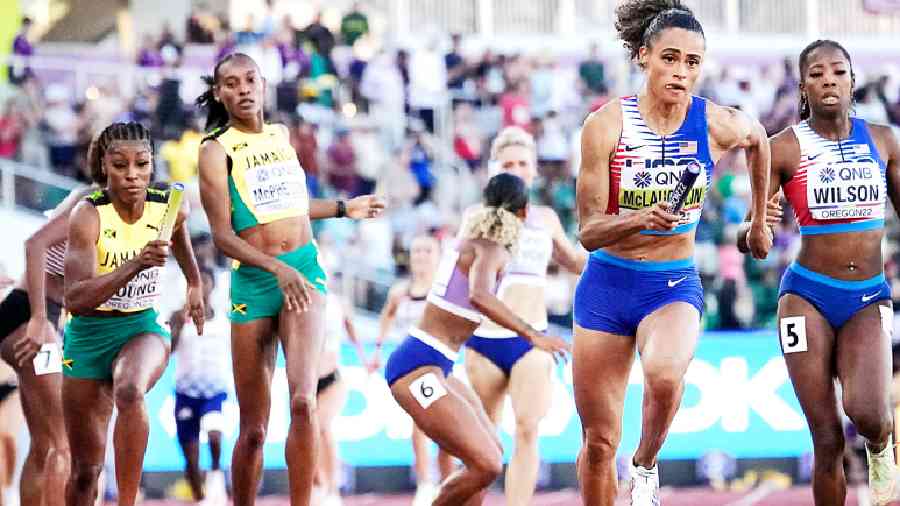 Earlier, the US men won the 4x400 metres relay in utterly dominant style in front of a delirious home crowd. Talitha Diggs got the American women off to a solid start and Abby Steiner kept ahead of Jamaican Janieve Russell in the second leg a day after helping the United States win gold in the sprint relay.

They maintained the lead through a series of clean changeovers before anchor Sydney McLaughlin, who shattered the 400m hurdles world record on Friday, brought it home for gold with a remarkable 47.91 final leg.

“I just wanted to give my team everything I had,” said Diggs. “It felt amazing.” Jamaica, who took bronze in Doha, finished far behind the United States in 3:20.74, while Britain crossed the line in 3:22.64.

Allyson Felix, the most decorated woman in track, did not run in the final but earned a 20th World Championships medal after making a surprise return for the United States in the preliminary round.

Earlier in the meet, Felix helped the United States to bronze in the mixed relay in what had been billed as her final World Championships race before she retires this year.

Elija Godwin and Bryce Deadmon were retained from the semi-finals with newly-crowned individual gold medallist Michael Norman and Champion Allison, fourth in the final, drafted in and each man extended the lead as they came home in two minutes, 56.17 seconds. In a race of their own 20m back, Jamaica took a second successive silver with Belgium, anchored by Kevin Borlee in his seventh World Championships, collecting bronze again after finishing third in Doha.

Japan set an Asian record to finish fourth as they went under three minutes for the first time with 2:59.51. “It’s a great feeling,” said Norman, who, with Deadmon, was also part of the Olympic gold-medal winning team last year.

“Elija ran an amazing first leg, really set the right tone, I just had to make sure I got it to Bryce so we could keep it up. I’m really happy with the medal and happy with the team and I really felt the energy today.”

Deadmon also praised the fans, who produced great noise on the final night of action to live up to Eugene’s “Tracktown USA” reputation.

“In Tokyo they had a virtual audio but to hear this crowd here, it was like crazy and definitely a help,” he said. “All our transitions went smooth. Pace was good, time was good, I mean, it felt like we came out to win.”

Jamaica’s Jevaughn Powell said: “It is always a tough task running with the Team USA but we are trying to challenge them as much as possible and I think we did that. “It is tremendous to be a part of this team. I’ve been watching these guys since the high school and it’s an amazing feeling to bring Jamaica on the podium again.”

Jakob Ingebrigtsen of Norway made up for his runner-up finish in the 1,500 metres with a convincing victory in the 5,000 metres, where reigning Olympic champion and world record holder Joshua Cheptegei faltered and finished in ninth place.

“I needed it,” Ingebrigtsen said. “I felt really good today ... but 5 kilometres is a tough race.” French world record holder Kevin Mayer regained the decathlon title after impressive performances in the pole vault and javelin, seizing opportunity after a competition-ending injury to Olympic champion Damian Warner.

In the morning session, Italy’s Massimo Stano claimed a one-second victory over Masatora Kawano of Japan in the men’s 35km race walk.

The United States consolidated their place at the top of the medals table with a championship record 33 medals.