Under gloomy sky, Rohit & Rahane have a bright day 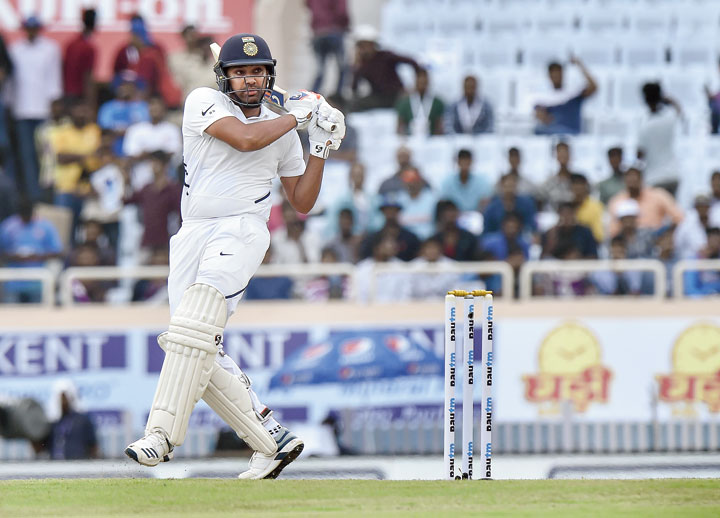 Pacers breathing fire under overcast conditions may be a worry for batsmen, but not if they are from the current Indian team.

The floodlights were on, so gloomy was the sky, but as has been the trend so far in this series, even such bowler-friendly conditions couldn’t quite tousle India as they ended Day I of the third and final Test against South Africa at the JSCA International Stadium on 224 for three.

From a precarious 39 for three, Rohit Sharma (117 batting) — scoring his third century of the series — and vice-captain Ajinkya Rahane (batting on 83) added a superlative, stroke-filled 185 for their unbroken fourth-wicket partnership. And that already seems to have laid the foundation for India’s 3-0 sweep.

Play was called off around half-an-hour before its scheduled closure due to bad light and rain that followed soon. Showers are expected over the next couple of days too, though that shouldn’t displease South Africa much given the amount of spanking their bowlers have been subjected to.

Hoping for a change in fortune, captain Faf du Plessis, in a bizarre move, brought Temba Bavuma alongside him to call at the toss. It didn’t help as Virat Kohli won the flip of the coin once again.

But Du Plessis wasn’t too disappointed initially despite losing the toss for the third time on the trot.

After India elected to bat, Kagiso Rabada threatened to serve them a reminder of what happened in Cape Town and the Centurion last year. Within the ninth over, India were two down for only 16 on the board.

A hint of away movement had Mayank Agarwal taken at third slip. Soon after, the ball tailed back in a bit and trapped Cheteshwar Pujara (0) plumb in front. Rabada had his tail up after the double strike.

Captain Virat Kohli, greeted with a bouncer by Rabada, fell to Anrich Nortje a little later. Nortje beat Kohli with inward movement, clinched a leg-before decision in his favour for his maiden Test wicket. Even DRS couldn’t save Kohli as the umpire’s call was upheld.

With three wickets down, not many runs on the board and the pitch having something in it for the quicks, matters got tough for India.

Rohit, too, looked tentative and shaky during that period. Shortly before Kohli’s departure, an inside edge off his bat had come to Rohit’s rescue after Rabada landed one perfectly on the spot and got it to shape in. Rohit had scored just seven when he got that reprieve in the 11th over. In other words, there was every possibility of his getting unsettled once Kohli too departed.

For the first time in the series, India were under serious pressure. But then when you have a batsman like Rahane, whose temperament stands out, there is always hope. And he proved so once again.

Regaining his rhythm in Antigua last August, where India were in a similar position (25/3), Rahane seems to be getting better with every game. He not just continued with his sensible batting, which was mostly about superb timing, but also played a crucial role in helping Rohit settle down.

In other words, Rahane shielded Rohit with his calmness and smart approach. His first 40 runs were scored at a fantastic strike rate of 90-plus, but with minimum risk.

With occasional sunshine, the moisture in the pitch too was gone and aided by the other South Africa bowlers’ inability to support Rabada, Rohit gradually went on to dominate the Proteas attack again, thereby getting his sixth Test century. And he got that in style with a maximum over wide long-off off a hapless Dane Piedt (replacement for Senuran Muthusamy).

By far the top scorer in this Freedom Trophy and hitting 17 sixes — the most in a series so far — Rohit appears to be the ideal opener India were desperately looking for over the last few years. But with due respect to him, the stuff dished out by the South African bowlers on this tour, particularly by the likes of Lungi Ngidi (replacing Vernon Philander) and Nortje in the ongoing Test, has made life easier for the opener.

On top of that, Rohit was dropped when on 28, denying debutant George Linde a maiden Test wicket in his very first over.

Precisely, South Africa messed it up in spite of playing five specialist bowlers. With variable bounce in the pitch already been noticed, India seem to be right in adding debutant Shahbaz Nadeem as their third spinner.

Meanwhile, like it happened in Pune, security was breached, not once but twice during the post-lunch session as a couple of fans entered the playing arena. Those in charge of security were expectedly late in reacting.

But fortunately for India, Rohit and Rahane have again reacted timely when it was really required.