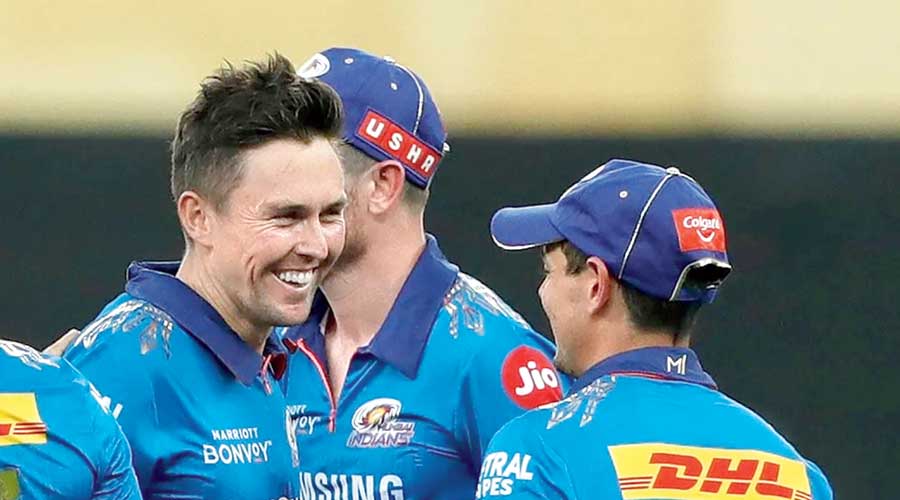 Playing in the IPL is an ideal way to get prepared and ready for the T20 World Cup, scheduled to begin next month in the UAE, New Zealand pacer Trent Boult has emphasised.

“Hundred per cent, it’ll help in preparations. You can’t probably have any better build-up to a tournament like that (T20 World Cup),” the left-arm pace spearhead said at a virtual media interaction on the eve of Mumbai Indians’ clash versus Kolkata Knight Riders in Abu Dhabi.

“Our focus is 100 per cent on the next couple of weeks, but in terms of preparation, it’s been pretty good. I think the conditions in the UAE can change quite quickly. We have to deal with the heat and humidity, a big challenge.

“But it’s going to be interesting to see how the conditions move over the next few weeks or so,” Boult added.

How the 32-year-old, known mainly for his ability to obtain prodigious swing, fares for Mumbai will be crucial to their prospects in the ongoing IPL as well as for the Black Caps in the T20 World Cup.

With the World Cup also to be held in the same venues, adapting to the conditions will be crucial, especially as Boult hasn’t had game-time since being part of the inaugural World Test Championship final, against India, in Southampton in June.

The first game of the second leg of IPL 2021, between Mumbai and Chennai Super Kings in Dubai on Sunday, was Boult’s first competitive match in almost three months. “I think it’s a big challenge coming from winter in New Zealand... Very vastly different conditions here with the heat and the pressure’s also there in the IPL,” Boult agreed.

“But it’s a big challenge that I really enjoy. I’m back after probably three months, but come what may, you have to be prepared and raring to go.”

Quicks will also have to deal with the heat and humidity, though Boult banks on his experience to tackle the challenges the conditions may pose. “Generally, a bit of humidity helps the ball move around in the air.

“With humidity comes dew and the challenges of holding the ball in the death overs when you try to bowl yorkers. So I suppose a lot of factors come into it.

“Personally, I’m experienced enough to deal with how the conditions move over here. I love to see the ball swing around a little bit more and carrying through like it does. Certainly, it’s a big challenge but one that I try to embrace as much as I can,” Boult explained.

Speaking of bowling on UAE tracks, he said: “It’s conditions that influence the kind of bowling. How full we can bowl will be important. For me, I’m pretty clear with my role, which is to try and be aggressive, swing the ball around upfront and pick up a couple of wickets early on.”

Effusive in his praise for the current Indian quicks, Boult feels the current group is an inspiration for many to take up fast bowling. “A lot of exciting talent coming through with the ball.

“Certainly, in the red-ball game, playing India in the WTC final and at home (in early 2020), the quality of fast bowlers that they have can perform at both home and overseas, which is amazing. And I think it’s due to a lot of the boys’ success over the last few seasons that other guys are being inspired to take up fast bowling,” Boult said.