With the club football season drawing to a close, The Telegraph talks about those who defined style and statement with elan and intellect, this season 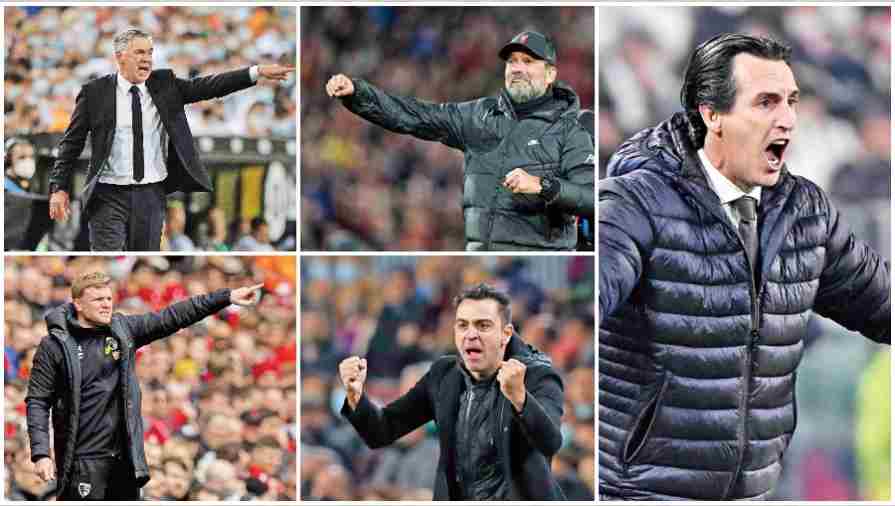 It often takes a wild gamble to turn the tide, and a wilder understanding of the waters, known and unknown, to play your cards that would upset the order in the rival camp. Over this season, the sidelines have had their own share of idiosyncrasies, rituals and mood maps as the Gaffers, with patented sartorial choices ranging from classy to chic, grabbed headlines. It has been a heated season with memorable clashes of tactics and gameplans that made the games what they were, with mental wars between the managers setting the prelude right. The Gaffers have always defined the game, and to see a Jose Mourinho shoving past an Arsene Wenger or a Simeone going bonkers has always riled us fans up. The Telegraph lists five names that defined style and statement with elan and intellect, this season.

When Don Carlo was announced as the manager following Zidane’s resignation, the reaction was ambivalent. While few believed it was not possible to relive the Zizou effect, the others knew it was a familiar face walking back into the Santiago Bernabeu to take up the reins. And it was not just another familiar face, it was one of the most successful and seasoned managers of all time having three Champions Leagues and four league trophies in four different countries to his name.

He knew the drill better than anybody. With the exit of skipper Ramos and the team finding it difficult to glue the pieces together, this was touted to be a transitional season for the Los Blancos. Knowing the system inside out, Ancelotti turned the season around by experimenting with the squad and deploying the limited arsenal with acute precision.

Initially drawing flak for his handling — of the youth brigade comprising Vinicius, Rodrygo and new signing Camavinga, Ancelotti established a system that brought it all together — fusing the pace-laden offensive wing-play with his rooted Italian stubborn hold, frustrating the opponent. Guiding Real to their 35th La Liga crown, Don Carlo became the first manager in history to win five league trophies in five different countries. However, the aura was different when it came to Champions League nights. Making sure the royalty remained untarnished, Ancelotti produced managerial masterclasses in few of the greatest comebacks in UCL history against star-studded PSG, Chelsea and Manchester City to guide them to the final, where they face a towering Liverpool side. Calm, composed, draped in black, the Don has always been a man of few words. No laurel eluding the man this season, yet again stands testimony to his grandeur. Helping a transitioning Madrid side to La Liga and a hopeful UCL glory and all of that, with just a tempered lift of an eyebrow.

It has been Jurgen all the way, from breaking into a ‘Let’s talk about six baby, let’s talk about you and me’ after guiding Liverpool to their sixth Champion’s League title to grinding his teeth in absolute horror at a rare Sadio Mane miss pass. This man has defined consistency like no other, already cementing his place as a Liverpool legend, and certainly among august company. Introducing the club to a whole new brand of aggressive football, with the likes of Salah, Mane and Firmino, Anfield witnessed the rise of a new era. After a relatively weak 20-21 season, finishing third in the league, he had the plan laid out for an almost impeccable season ahead.

With new signings Jota, Thiago and Luis Diaz, Klopp fused his usual aggression with an economical understanding of balance and rotation. Keeping Liverpool in the title race, that is certainly going down to the wire, Liverpool currently stand a point behind leaders Manchester City. Easing past the Champions League group stage undefeated, Klopp’s side brushed aside a dominant Inter Milan, Benfica and Villarreal to reach the Champions League final for the third time in his rein. Klopp redefined the Reds yet again, as both goal scoring and assists league charts for the season find familiar Liverpool faces perched on the top. Playing his cards with deft understanding, Klopp deployed players like Thiago, Firmino and Van Dijk in ways which helped them find their top groove back, after few initial hiccups. Relentless, resilient, focused, but never losing the wide smile, Klopp proved once again, why he is still one of the best in the business, after a sensational campaign which promises more drama and glory in the coming days.

It has mostly been about ‘good ebenings’ for Villarreal since Unai Emery took over in July 2020. The Yellow Submarine found a new melody of uncontrollable ecstasy, as Emery guided the team to the first major trophy in its history, brushing aside Manchester United to win the Europa League in his first season. If anyone would have told Villarreal would pose serious danger to the mighty Liverpool side in the semi-finals of the Champions League following that, they would have been laughed off.

Emery took it upon himself to script a remarkable season for the club, as he guided the team to the semi-finals of the Champions League, defeating mammoths Juventus and Bayern Munich. It has been nothing but a fairy-tale run for the team led by Emery with his unique understanding of tactical tweaks, stretching defence lines and finding the opportune moments to counterattack with maximum effect. Safe to say, it has not only been his perfectly back-brushed hair that sits with enviable perfection, but also his passion and understanding that does, at the blazing Estadio de la Ceramica.

Barcelona haven’t been the same after the rockiest couple of seasons in the history of the club. Having lost the mojo and following Koeman’s sacking, Camp Nou really need a breath of fresh air to turn things around. That is when Xavi agreed to get back to his boyhood club as manager and bring the lost glory back. The air was different the moment he took over in November, with discipline and zeal defining the training sessions.

The change in style and approach was visible in the way Barcelona controlled the ball in his first few matches as coach. Gradually bringing back glimpses of positional brilliance and tiki-taka, Xavi breathed hope into the stands, as he galvanised the team into a much-awaited goal-scoring spree. His effect could be felt in the way teenage sensations Pedri and Gavi retained and distributed the ball. Centering the play around skipper Busquets, Xavi weaved together a composite unit with individual performances of the players bettering every week. With Xavi-ball at its initial peak, Barcelona went 15 games undefeated, rising to the second position on the league table. Despite a disappointing end to the European campaign, the renewed vigour and passion among the players stands palpable. His utilisation of Araujo, Pique, Pedri, Gavi, Dembele and new signings Adama, Ferran and Aubameyang highlighted his careful understanding of the team depth. With soaring passion and drive, one can only hope to see Barcelona back basking in its usual glory and who better to trust than the man himself? There are only few who know the Camp Nou grass as well as him.

When Eddie Howe took over the managerial position at Newcastle from Steve Bruce, the Magpies were fearing relegation with no wins in its 11 opening matches. Following the historic takeover, Eddie completely revamped the system and metamorphosed the mood in the camp. Utilising spaces and banking on pace and connection, the team got back its mentality gradually and currently sit on the top half of the table at 10th, following a sixth successive home win. With his familiar trio of Callum Wilson, Matt Ritchie and Ryan Fraser and consistent performers Saint-Maximin and Shelve, Howe transformed the team with his insistence on pace and possession. Bringing Newcastle to the top half, the season was witness to Howe’s tactical genius. With promised big-spendings expected to shore up St. James’ Park in the coming season, Howe looks to be the perfect man for the job, having earned the admiration of the new owners and the fans alike.