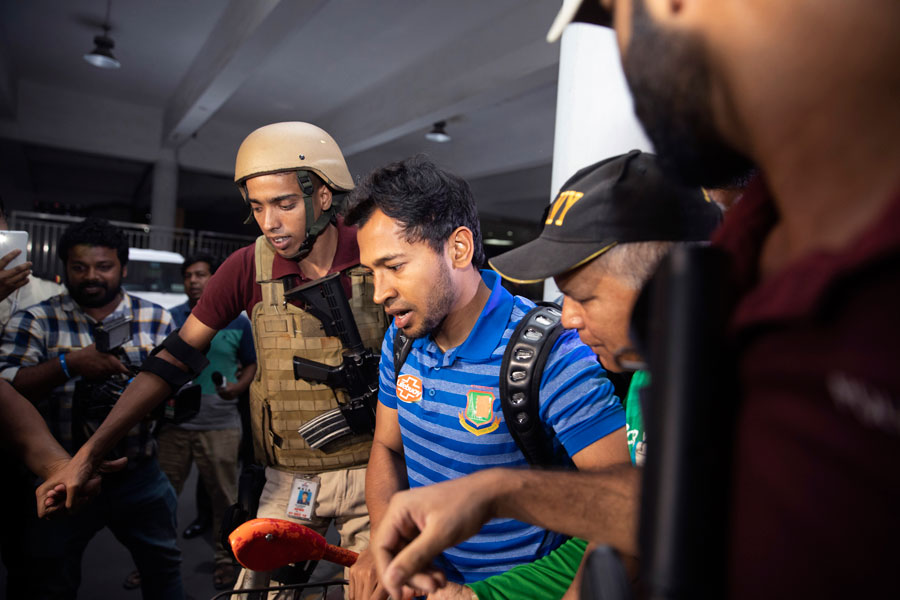 A special prayer meeting was conducted by the Bangladesh Cricket Board (BCB) on Monday afternoon.

Held at the BCB’s HQ, in Dhaka, it served a double purpose: (A) To remember the 50 victims of the Christchurch terror shootings and (B) Thank the Almighty for sparing the Bangladesh Test squad.

According to a well-placed source of The Telegraph, regular Test and T20I captain Shakib-al Hasan, ODI captain Mashrafe Mortaza and Mahmudullah Riyad, stand-in captain during the Test series in New Zealand, which ended abruptly, were present.

“Besides those six, there were a host of BCB officials, lesser-known players and umpires. As you can appreciate, it was emotional for some,” the well-placed source said.

Fourteen players (including Mahmudullah) and three members of the support staff were metres away from the Al Noor Mosque when worshippers were being gunned down by a “fascist and racist” shooter.

Had Mahmudullah’s Media conference on the eve of what was to be the third and final Test, at the Hagley Oval, not got extended by some five minutes, then all 17 would surely have been inside the Mosque instead of sitting terrorised in the team bus.

As the BCB hasn’t appointed a security manager, there was no coordination at the ground level on such an important aspect of today’s sport.

Actually, such an important aspect of life itself today.

Goes without saying there would have been fatalities had Mahmudullah and the rest (including a member of the support staff from India) kept to the scheduled time for praying at the Mosque: 1.30 pm.

With the series over and Christchurch having witnessed a bloodbath, all the players and most members of the support staff returned to Bangladesh on Saturday night itself.

Getting the Mahmudullahs out of New Zealand in the shortest time possible had been a priority for the BCB. It didn’t fail.

The players and the Bangladesh-based members of the support staff are likely to have a closed-door meeting with the BCB brass “in the very near future.”

That would largely be to assess if anybody requires professional help to overcome the trauma. In any case, it’s one experience which won’t quickly get tucked away at the back of their minds.

Going forward, an interaction with the Prime Minister, Sheikh Hasina, is a possibility.

According to the New Zealand Police, only one shooter — 28-year-old Brenton Tarrant, an Australian — was involved in the killings at both Mosques (Linwood being the other).

Obviously, that raises more questions and puts the Police in a terribly embarrassing position. The Mosques, after all, are 5 kms apart.

So, one shooter had a free run for that many kms? Hard to believe.

Predictably, the investigation has taken on international dimensions with the FBI and agencies in Australia getting into the act.

Expect counter-terrorism experts from the UK too to play some role, especially as UK hosts the cricket World Cup from May 30.