Paddler becomes the country's first ever to win a medal; other two achievements came in discus throw and high jump; social media is celebrating 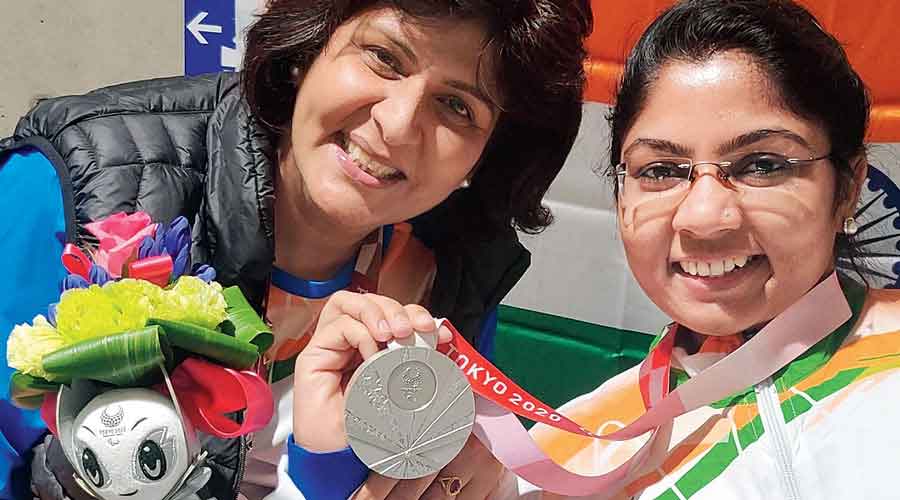 Bhavinaben Patel (right) with Paralympic Committee of India chief Deepa Malik after the paddler won the silver medal at the Paralympics in Tokyo on Sunday.
PTI Photo.
Our Bureau And Agencies   |   Calcutta, Tokyo   |   Published 29.08.21, 07:14 PM

Bhavinaben Patel on Sunday became only the second Indian woman to win a medal at the Paralympics after she signed off with a silver following a 0-3 loss to world No. 1 Chinese paddler Ying Zhou in the women’s singles table tennis class 4 final in Tokyo.

More joyful news comes from Tokyo! Absolutely delighted that Nishad Kumar wins the Silver medal in Men’s High Jump T47. He is a remarkable athlete with outstanding skills and tenacity. Congratulations to him. #Paralympics

Later, high jumper Nishad Kumar clinched a silver medal with an Asian record before discus thrower Vinod Kumar fetched a bronze which was put on hold after a protest over his disability classification.

It's a #Bronze for #IND as his best throw of 19.91m in the Men's Discus Throw F52 final earns the nation their THIRD medal of the day.

Patel, a wheelchair player, had also suffered a loss to Zhou, one of the most decorated para-paddlers of China, in her first group-stage match earlier in the week. “I can only assure you that next time I meet her you will see a different me. This medal will go a long way and I can assure you that,” she said.

Patel had missed out of the Rio Olympics five years back due to some issues with her documents but now that she has claimed a medal, she feels it was a blessing in disguise. “Had that not happened, probably I would not have been in Tokyo with a medal. I want to tell all the women out there trying to break away from the stereotypes to believe in themselves and just go for it,” she said.

Nishad, whose right hand got cut by a grass-cutting machine at his family’s farm when he was an eight-year-old boy, cleared the same height of 2.06m with American Dallas Wise who was also awarded a silver. Another American, Roderick Townsend, won the gold with a world record jump of 2.15m.

You have crossed many hurdles and proved that you can succeed despite all odds. Bhavina your historic 🥈is the perfect gift for the nation on National Sports Day. Each and every Indian is proud of you. #Tokyo2020 #Cheer4India #Praise4Para #BhavinabenPatel pic.twitter.com/45oRl03rNs

Vinod’s classification in F52, which is for athletes with impaired muscle power, restricted range of movement, limb deficiency or leg length difference, was done on August 22 by the organisers.

“Results of discus throw F52 are currently under review due to classification observation in competition. The victory ceremony has been postponed to the evening session of August 30,” read a statement from the Games organisers.