Advertisement
Home / Sports / Olympics: Spare a thought for the Indian Army too

Olympics: Spare a thought for the Indian Army too 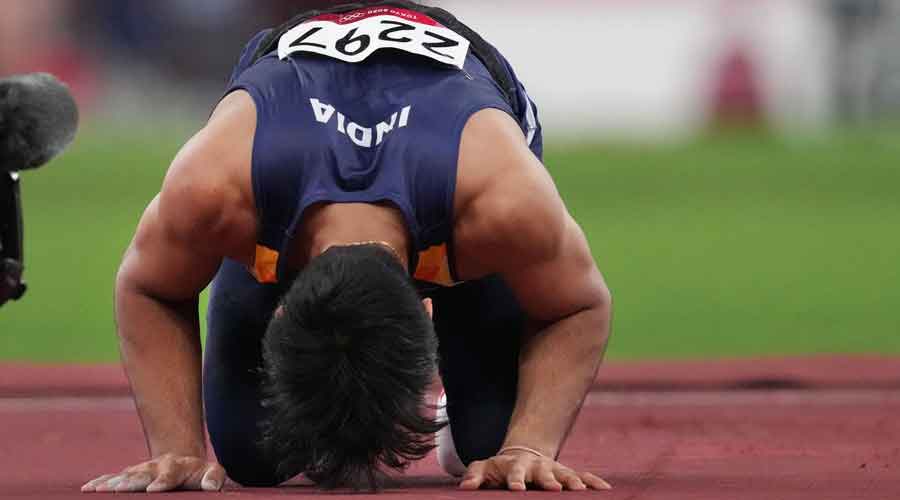 Neeraj Chopra bows down on the track after winning in the final of the men's javelin throw event at the 2020 Summer Olympics, in Tokyo, on Saturday.
PTI photo
Deepam Chatterjee   |   Published 08.08.21, 02:42 AM

While a delirious India was celebrating, Neeraj Chopra had quietly disappeared off camera.

When the camera panned across to him again, he was running on the elliptical track that encircled his victory arena, his head held high along the near-empty stands.

The Tricolour was billowing behind him.

Subedar Neeraj Chopra wasn’t running for any spectators. Chopra’s lap must have been his message of gratitude to the Indian Army and a nation that had waited so long for this moment.

This is not the first time that the Indian Army has displayed guts and glory on the world stage.

The Indian armed forces and their heroics in the sporting arena are the stuff of legend.

The first sporting icon of the country post-Independence was Major Dhyan Chand, who served in the Punjab Regiment. Milkha Singh, “The Flying Sikh” who passed away in June, was recruited as a sepoy in 1951.

Paan Singh Tomar of the Bengal Engineers Group represented India in the steeplechase at the Tokyo Asian Games in 1958. Army boxer Padam Bahadur Malla was the first to win a gold medal at the 1962 Asian Games in Jakarta.

Ignacious Tirkey of the Madras Engineering Group of the Indian Army was awarded the Arjuna Award for his outstanding contribution to Indian hockey. The Indian polo team has always been fielded with ace polo players from the 61st Cavalry. The list goes on and on.

From a professional point of view, the interest of the Indian Army has been natural in sports such as shooting, mountaineering and sailing. The army operates its Marksmanship Unit in Mhow and the High Altitude Warfare School in Gulmarg.

After Tenzing Norgay, some of the first Indians to climb Mount Everest were from the army, starting with Avtar Singh Cheema. Mountaineer Narendra “Bull” Kumar is credited with securing Siachen for India. The Indian Army has a sailing team that is trained at the Army Rowing Node in the College of Military Engineering, Pune.

India’s armed forces have been at the forefront of producing sportsmen of international pedigree. The army adopts a systematic and structured method with the aim of attaining sporting excellence.

Tournaments are held at the battalion, brigade, divisional and command levels in every sporting discipline to seek out champions. These tournaments are intensely fought for the “naam” and “izzat” of the respective battalions. The best athletes from the tri-services get to represent the defence forces at national-level meets.

But the going hadn’t been too good for Indian sports for a very long time. The Indian Army top brass felt that the armed forces should do something about it. Thus, the programme Mission Olympics was launched in 2001.

The Mission Olympic wing has five nodes: the Army Sports Institute (Pune), the Army Marksmanship Unit (Mhow), the Army Rowing Node (Pune), the Army Yachting Node (Mumbai) and the Army Equestrian Node (Meerut), which are working towards producing world-class sportsmen in archery, boxing, shooting, weightlifting, wrestling, equestrian and rowing. It comes as no surprise that a sizeable part of India’s Olympic contingent at Tokyo was made up of athletes from the Services.

The Army Sports Institute at Pune has changed the face of the country’s sporting culture. It is a unique, multi-disciplinary sports institute that imparts training in seven sports: archery, athletics, boxing, diving, wrestling, fencing and weightlifting.

The training is imparted by renowned foreign and Indian coaches and qualified physical trainers. They are supported by a team of specialists in sports medicine, sports physiology, sports psychology, bio-mechanics and nutrition. The institute provides modern training infrastructure, equipment, accommodation and environment, and a sports sciences centre.

When the army’s athletes failed to win any medals at the Rio de Janeiro Olympics of 2016, the planning for the Tokyo Olympics began on a war footing. It was that same year that Chopra joined the Indian Army as a junior commissioned officer.

The army has made a concerted effort to nurture and produce sportspersons, providing equipment, support staff, coaching, accommodation, and a proper diet to its athletes. In other words, everything is taken care of, and then there’s job security as well. Another factor that the army’s athletes swear by is discipline.

Chopra says he got a sense of self-reliance after joining the army. “My father is a farmer, mother a housewife and I live in a joint family…. For me, it’s a sort of a relief because now I’m able to help my family financially, besides continuing with my training.”

With Subedar Neeraj Chopra of the Indian Army’s Rajputana Rifles winning the lone gold for India at Tokyo, “Citius, Altius, Fortius — Communis”, the newly modified motto of the Olympics, could add another word, “Extremus” — farthest, or situated at the end, edge or tip — and raise a toast to the sportsmanship of the Indian Armed Forces.

⚫ Deepam Chatterjee is a former captain of the Indian Army

Neeraj had eyes on Games record