There was only one gold up for grabs, but it was worth the wait as Ugandan world record holder Joshua Cheptegei allowed the 21-year-old Barega to escape and win in 27 minutes 43.22 seconds 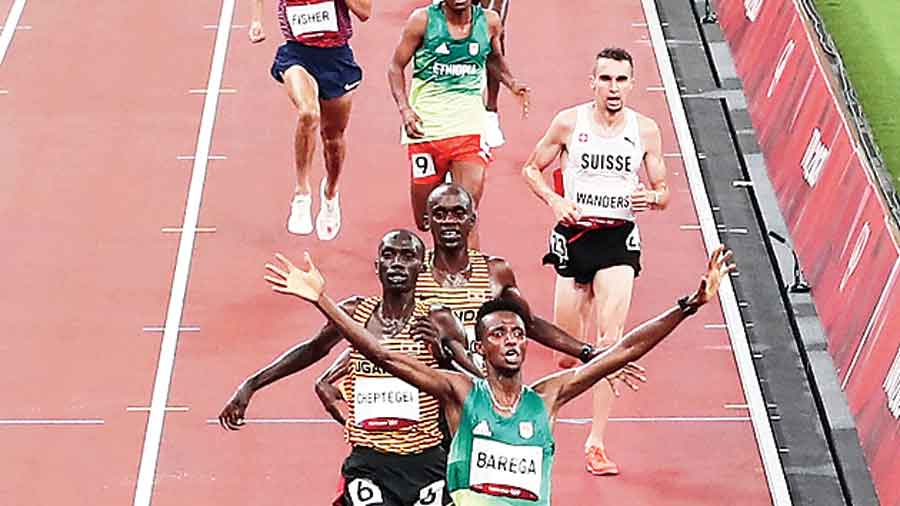 Gold medallist Selemon Barega of Team Ethiopia celebrates as he crosses the finish line ahead of Uganda’s Joshua Cheptegei (silver) and Jacob Kiplimo (bronze) in the men’s 10,000m final at the Olympic Stadium on Friday.
Getty Images
Reuters   |   Tokyo   |   Published 31.07.21, 02:08 AM

There was only one gold up for grabs, in the last event of the opening day, but it was worth the wait as Ugandan world record holder Joshua Cheptegei allowed the 21-year-old Barega to escape and win in 27 minutes 43.22 seconds before celebrating with an in-field dance on a sultry night.

Hot favourite Cheptegei left it way too late to chase him down and only just caught 20-year-old compatriot Jacob Kiplimo on the line to take silver.

Cheptegei said he was experiencing mixed emotions. “I have two feelings. One is that I’m very happy to have won an Olympic silver medal today,” he told reporters. “But the other side of me is really not satisfied with the result because I came here expecting to win a gold.”

Cheptegei led briefly before dropping back into the pack and Barega seized his chance, moving among the leaders in the last third of the race before hitting the front with a surge on the last lap to secure his surprise victory.

The US’ difficult history in relay races reappeared in the Olympic debut of the 4x400m mixed relay when the team was disqualified for a bad exchange, only to be reinstated after filing a middle-of-the-night protest.

Officials originally ruled that Lynna Irby had positioned herself outside the passing zone when she received the exchange from Elija Godwin in Friday night’s preliminary heat. Later, they overturned that decision on appeal.

The heavily-fancied US team won their heat comfortably. Poland, the Netherlands, Jamaica and Britain were among the fastest qualifiers for Saturday’s final.

In the fast lane

Defending champion Elaine Thompson-Herah showed she is not going to stand aside to hand a hat-trick of titles to compatriot Shelly Anne Fraser-Pryce when she posted an impressive 10.82 seconds. Fraser-Pryce too was in cruise mode to clock 10.84.

Marie-Josee Ta Lou of the Ivory Coast set an African record of 10.78 suggesting that Saturday’s final could be something special.