He had gone nearly 11 years since he won his last major, 14 years since that green jacket was slipped over his Sunday 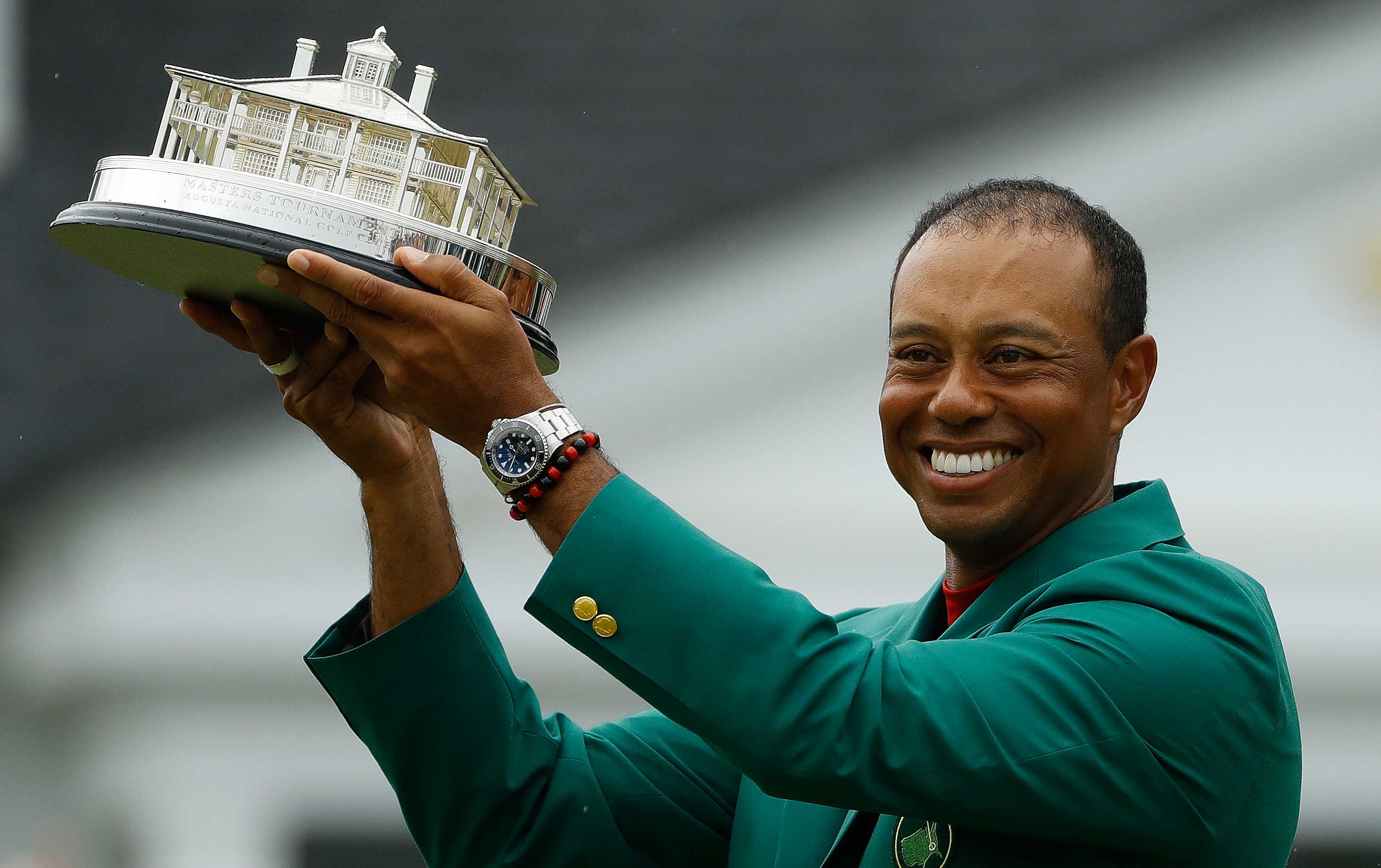 Tiger Woods rallied to win the Masters for the fifth time Sunday, a comeback that goes well beyond the two-shot deficit he erased before a delirious audience that watched memories turn into reality at Augusta National.

Woods had gone nearly 11 years since he won his last major, 14 years since that green jacket was slipped over his Sunday red shirt. He made it worth the wait, closing with a 2-under 70 for a one-shot victory and setting off a scene of raw emotion.

He scooped up 10-year-old Charlie, born a year after Woods won his 14th major at Torrey Pines in the 2008 US Open. He hugged his mother and then his 11-year-old daughter Sam, and everyone else in his camp that stood by him through a public divorce, an embarrassing DUI arrest from a concoction of painkillers and four back surgeries, the most recent one just two years ago to fuse his lower spine.

'WOOOOOOO!!!' Woods screamed as he headed for the scoring room with chants of 'Tiger! Tiger! Tiger' echoing as loud as any of the roars on the back nine at Augusta National.

'It's overwhelming, just because of what has transpired,' Woods said in Butler Cabin. 'Last year I was lucky to be playing again. At the previous year's dinner, I was really struggling. I missed a couple of years not playing this great tournament. To now be the champion ... 22 years between wins is a long time. It's unreal to experience this.'

Woods lost his impeccable image to a sex scandal, one of the swiftest and most shocking downfalls in sport.

He lost his health to four back surgeries that left him unable to get out of bed, much less swing a club, and he went two years without even playing a major. It was two years ago at the Masters when Woods said he needed a nerve block just to walk to the Champions Dinner. At that time, he thought his career is over.

Now the comeback is truly complete.

He wrapped his arms around his father when he won his first green jacket in 1997, changing the world of golf.

'Now I'm the dad with two kids there,' he said.

He wanted his children to see him win, once saying they saw him only as a YouTube legend. They were at the British Open when he had the lead briefly. They couldn't make it to East Lake last September, when he won the Tour Championship for his first victory in five years.

'I wasn't going to let that happen to them twice,' he said. 'To let them see what it's like to have their dad win a major championship, I hope it's something they'll never forget.'

Woods won his 15th major, three short of the standard set by Jack Nicklaus. It was his 81st victory on the PGA Tour, one title away from the career record held by Sam Snead.

'A big 'well done' from me to Tiger,' Nicklaus tweeted. 'I am so happy for him and for the game of golf. This is just fantastic!!!'

It was the first time Woods won a major when trailing going into the final round, and he needed some help from Francesco Molinari, the 54-hole leader who still was up two shots heading into the heart of Amen Corner.

And that's when all hell broke loose at Augusta.

Molinari's tee shot on the par-3 12th never had a chance, hitting the bank and tumbling into Rae's Creek for double bogey. Until then, Molinari had never trailed in a round that began early in threesomes to finish ahead of storms.

And then it seemed as though practically everyone had a chance.

Six players had a share of the lead at some point on the back. With the final group still in the 15th fairway, there was a five-way tie for the lead. And that's when Woods seized control, again with plenty of help.

Molinari's third shot clipped a tree and plopped straight down in the water for another double bogey. Woods hit onto the green, setting up a two-putt birdie for his first lead of the final round.

The knockout punch was a tee shot into the 16th that rode the slope just by the cup and settled 2 feet away for birdie and a two-shot lead with two holes to play.

Xander Schauffele failed to birdie the par-5 15th and scrambled for pars the rest of the way for a 68. Dustin Johnson made three straight birdies late in the round, but he got going too late and had to settle for a 68 and a return to No. 1 in the world.

Brooks Koepka, one of four players from the final two groups who hit into the water on No. 12, rallied with an eagle on the 13th, narrowly missed another eagle on the 15th and was the last player with a chance. His birdie putt on the 18th from just outside 10 feet never had a chance, and he had to settle for a 70.

'You want to play against the best to ever play,' Koepka said. 'You want to go toe-to-toe with them. I can leave saying I gave it my all. He's just good, man.'

Wood finished at 13-under 275 and became, at 43, the oldest Masters champion since Nicklaus won his sixth green jacket at 46 in 1986. That for years has stood as Augusta's defining moment.

This was one is sure to at least rival it.

'This is definitely, probably one of the greatest comebacks I think anybody's ever seen,' Koepka said, before rattling off Woods' total PGA Tour victories and 15 majors.

Is the Nicklaus record back in play?

'I think 18 is a whole lot closer than people think,' Koepka said.

Koepka and Molinari both faced Tigermania in the majors and held their own, Molinari at Carnoustie to win the British Open, Koepka last summer at Bellerive to win the PGA Championship.

Molinari went 49 straight holes without a bogey, a streak that ended on the seventh hole. It was the double bogeys that cost him, and the Italian was gracious as ever in defeat.

'I think I made a few new fans today with those double bogeys,' he said.