Advertisement
Home / Sports / Fischer vs Spassky: The Cold War on a chessboard

Fischer vs Spassky: The Cold War on a chessboard

The 1972 World Chess Championship saw Bobby Fischer of the US challenge the Soviet Union's Boris Spassky. Fifty years later, the 'Match of the Century' lives on 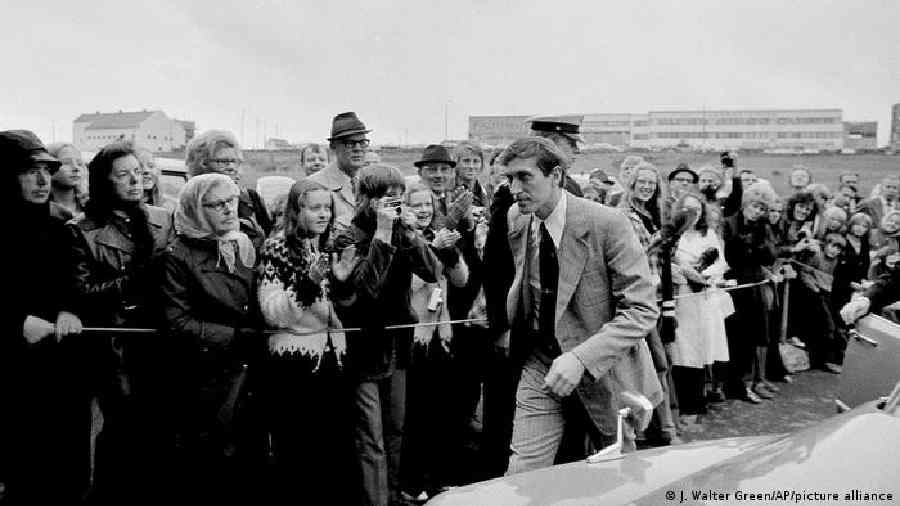 Where is Bobby Fischer? It is July 1, 1972, and the National Theater in Reykjavik is getting restless. The hall where the "Match of the Century" is to open is mostly full, but one seat remains empty.

Robert ("Bobby") Fischer, the challenger from the USA, is not there. And someone else is missing: Gudmundur Thorarinsson, the young head of the Icelandic Chess Federation.

Thorarinsson, now 82 years old, remembered the scene in his 2022 book, "The Match of All Time."

"I had negotiated with Fischer's lawyer until the last minute — it was always about money," wrote Thorarinsson. Fischer was demanding that the players receive 30% of the proceeds from the television rights and the box office, in addition to a prize haul of $125,000 (€118,000).

But in vain: There was no commitment from the chess grandmaster from New York. "I then arrived 15 minutes late for the opening, had no speech prepared and didn't know what to say on stage," Thorarinsson recalled.

He did not, however, call off the hugely anticipated match-up between representatives of global superpowers in the midst of the Cold War. Fischer was the top-ranked player in the world but Russian player Boris Spassky was the defending champion.

The International Chess Federation decided to postpone the game for two days. "What would have happened in the chess world if we Icelanders had canceled the match at that time?" said Thorarinsson, who believed Fischer would turn up.

"I knew that Fischer had worked his whole life towards this title match," he said.

After an American patron raised the prize money at short notice, Fischer finally boarded the plane bound for Reykjavik. The sleepy Icelandic capital was thrust into the world press spotlight in anticipation of the East versus West chessboard match-up.

"Most Icelanders at the time wanted the likeable Spassky to win," recalled Icelander Helgi Olafson, then a 16-year-old chess talent and later grandmaster, in his 2012 book "Bobby Fischer Comes Home." "Spassky was a gentleman."

But it was Bobby Fischer who provided the spectacle. "Chess is war on the board," he once said. "The object is to crush the other man's mind."

On July 11 he finally sat down at the board for the first game, which Spassky won. Fischer did not take part in the second round after he complained about noise and the light. He suspected tricks by the Soviet team. Fischer refused to continue and forfeited. There were fears the World Chess Championship was on the verge of being canceled.

A German referee saved the match

The German referee Lothar Schmid, himself a chess grandmaster and owner of the Karl May publishing house in Bamberg, then found a solution.

The match would be played in a back room where there is normally a ping-pong table.

"Lothar Schmid was an excellent referee," recalls Gudmundur Thorarinsson. The start of the third game was legendary. On the spur of the moment, Schmid pushed the two into their seats and shouted, "now play chess!"

And Fischer played. The third game was a turning point in the match. Spassky, perhaps affected by the back and forth, made mistakes and conceded an unexpected defeat. From that moment on, Fischer took command on the chessboard.

"Spassky was always about chess, so he kept playing despite Fischer's antics," said Helgi Olafsson, who believed there was too much focus on the US American. "We forget what a great player and sportsman Boris Spassky is."

Nonetheless, after a win in the 21st round, Fischer had an unassailable lead. The decades-long dominance of the Soviet Union in chess was broken. The USA may not have won the Cold War in Reykjavik, but they had won the battle on the chessboard.

The myth of Bobby Fischer

The story of the 1972 World Chess Championship does not end with the closing ceremony. The match triggered a worldwide chess boom.

"All of a sudden, chess was a thing that interested everyone and you could even earn money with it — even if you didn't come from the Soviet Union," noted Helgi Olafsson.

But in the wake of the Match of the Century, the old question is asked about the victor. Where is Bobby Fischer?

He did not show up to play against the young Russian Anatoly Karpov in 1975 to defend his world title. After that, nothing was heard of the chess player Bobby Fischer for a long time.

Then in 1992, having not completed a competitive match for 20 years, Fischer competed in an unofficial but lucrative rematch against Boris Spassky in the Republic of Montenegro during the Bosnian War.

Fischer once again showed his class and defeated his old rival for the second time.

But this competition was to shape the further course of Fischer's life: As Yugoslavia was under an embargo, the US government issued a warrant for Fischer's arrest for taking part in the match.

"Fischer felt persecuted — and indeed he was," Helgi Olafson noted. The increasingly paranoid Fischer went into exile and became even more eccentric.

He espoused conspiracy theories and made antisemitic and anti-American statements. The low point was reached in 2005: The ex-world champion was in poor health and was held in custody pending deportation in Japan.

But in Iceland, the ex-champion had not been forgotten and a committee was formed to bring Bobby Fischer to Iceland. It succeeded in convincing Iceland's foreign minister to grant Bobby Fischer Icelandic citizenship.

Arrangements were finally made with the US and Japan for him to leave for Iceland. In March 2005, the time had come: A shaggy-bearded Bobby Fisher landed back in Reykjavik, the place of his great triumph.

"He was a broken man when he came back to Iceland," recalled Helgi Olafson, who supported the former world champion in his final years.

"I made it clear to Fischer right at the beginning that I had no interest in his crazy stories," Olafson wrote.

"When Fischer suddenly stopped playing at 29, he was just Bobby Fischer without chess, a man without a real life," he added. But the former champion enjoyed some peace of mind during his final years in Iceland.

In 2008, Fischer's health deteriorated and he succumbed to a kidney disease for which he refused treatment. Bobby Fischer, for many the best chess player of all time, was dead at the age of 64.