The Magnus Carlsen fan has already bagged the under-11, 13, 15 and senior titles 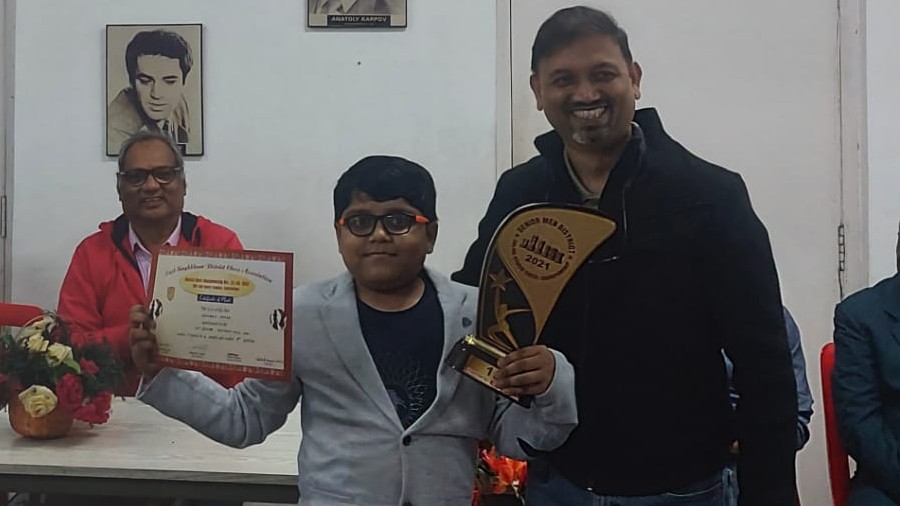 Steel city youngster Adhiraj Miitra has once again proved his mettle across the chessboard, after starting the game two-and-a-half years ago.

Adhiraj, who idolizes Norwegian Grandmaster Magnus Carlsen and is a big fan of Viswanathan Anand, pocketed the under-11, under-13, under-15 and the senior titles in the boy’s category during the course of the championship.

The kid, who loves to beat players of higher age groups, belies his age with intelligent moves and is all set to take big strides in the future.

“I am very happy with my performance. I won four titles, including one in the senior section. I will continue to train hard and make more improvements to my game,” said Adhiraj, a standard IV student of Loyola School.

The parents of Adhiraj, Uttam and Runa, said they were very proud of their son for winning so many titles at such a young age. “Any parents will be happy and proud if their ward achieves success,” said Uttam ,a businessman.

Adhiraj has also proved his prowess on earlier occasions. He claimed the under-18 title, topped in the under-12 and under-10 section, besides finishing runner-up in the under-14 age category at the chess festival organized by All Jharkhand Chess Association earlier this year.

The young player, who works 10-12 hours on the chess board under his maternal uncles Dushyant and Abhishek Das, both international players, had also emerged as a champion in the district under-18 online chess event conducted earlier this year.

"I dream of becoming a world champion. I will do everything to achieve this dream," said Adhiraj, who also loves roller skates and is fond of watching cartoons.

Adhiraj had met Viswanathan Anand when the Grandmaster was in Jamshedpur to promote his book Mind Master in February 2020.  He had always wanted to play with the five-time world champion. The dream came true when Adhiraj went up to Anand at the JRD Tata Sports Complex where Viswanathan was meeting 200 chess enthusiasts and taking the opportunity he requested the Grandmaster for a game. To the boy’s utter delight, Anand said yes.

“I cannot forget that moment. Though I played for just five minutes with the great Viswanathan Anand, it was an unforgettable experience,” Jharkhand’s chess prodigy Adhiraj recalled.