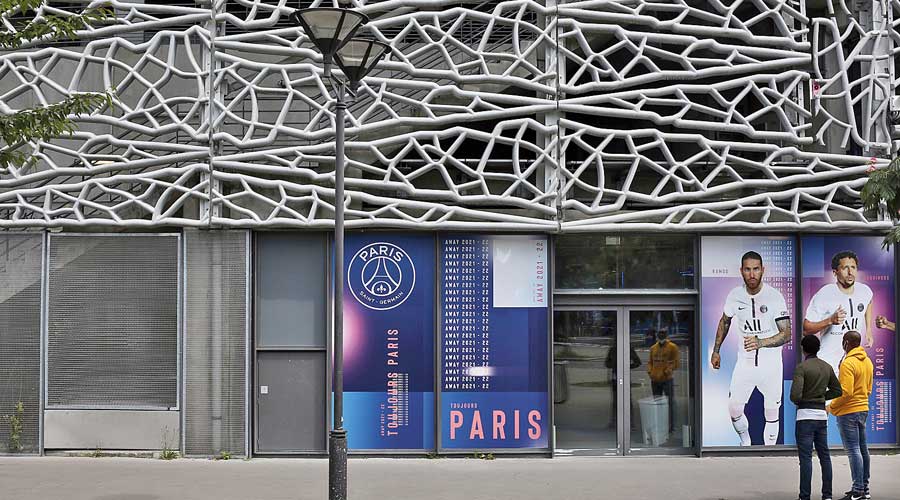 Paris Saint-Germain supporters stand outside an annexe of the Parc des Princes stadium in Paris on Monday. Lionel Messi could become the latest star to help PSG in their quest to win the elusive Champions League.
PTI/AP
Reuters   |   Barcelona, Paris   |   Published 10.08.21, 01:30 AM

FC Barcelona fans gathered outside Lionel Messi’s house on Monday and spoke of their sadness at the club’s greatest player leaving after 21 years, while Paris Saint-Germain fans eagerly awaited his arrival in the French capital.

One Barca member on Monday filed complaints with a French court and with the European Commission to try to block any move by PSG to sign Messi.

The 34-year-old on Sunday bid farewell to the club he has spent his entire career at and confirmed that he was talking with the Paris club over a possible move.

There were no signs of movement around Messi’s house in the hills of the wealthy Barcelona district of Castelldefels on Monday, however, where fans waited to catch a glimpse of the player.

“I feel devastated,” said Cristian Garcia, wearing a Barca shirt with Messi’s name and number 10 on the back.

Messi said he had agreed a 50% pay cut in order to stay at Barca and sign a new contract but was unable to finalise the deal due to the Spanish league’s financial control rules and the club’s debts, which total more than 1.2 billion.

La Liga said last Wednesday it had secured a private equity injection of 2.7 billion euros from firm CVC, with the funds to be shared among the clubs in return for 10% of the league’s revenue.

It had been believed this would allow Barcelona to get the Messi deal done, but after Real Madrid rejected the proposal, Barca also came out against it.

“I don’t think the club has done enough to make him stay,” said Barca and Argentina fan Gonzalo Moreno.

Messi said on Sunday that PSG was “a possibility” but that he had not yet signed any deal. In the Barcelona member’s legal complaints, shared by the fan’s lawyer, the member claims that French football authorities have failed to enforce their own financial fair play (FFP) rules in order to help PSG become a force in European football.

The FFP rules notably forbid top European football clubs to pay their playing squads an excessive share of their total revenues, according to the complaints, which also state that the transfer of Messi to PSG would breach the code.

PSG and the French football league did not immediately respond.

While Messi did not confirm he would definitely join the Parisians, he said his plans were to carry on playing as long as possible, adding he still harbours ambitions to win another Champions League trophy.

“We’re waiting for a legend, the legend that is Leo Messi,” said PSG fan Mehmet Sen, who had been waiting at the gates to Paris’ Le Bourget airport since 2am for a glimpse of the star.

Shares in companies involved in French football rose. Shares in Olympique Lyon rose 0.9%, while shares in TV group TF1 and Canal Plus owner Vivendi were up 1.3% and 0.2% respectively, as Messi’s move would likely drive up overall viewing figures for French soccer.