Tail of defiance key to Indian success against England

While Team India have been basking in their recent glory, a similar story had unfolded in the England ranks during their disastrous 2018 tour 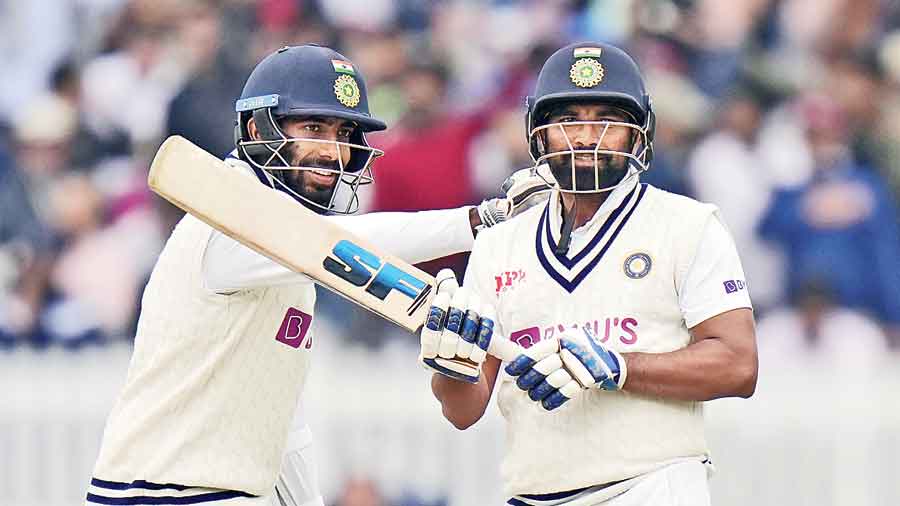 Jasprit Bumrah congratulates Mohammed Shami on his half century against England on the final day of the second Test against England at Lord’s.
AP/PTI
Indranil Majumdar   |   Calcutta   |   Published 09.09.21, 01:15 AM

If Virat Kohli’s men secure India’s first series victory on English soil since 2007, they will become the third team after West Indies and South Africa to achieve it in England and Australia in a calendar year. Amid the euphoria what will remain untold is the significant contribution of India’s tailenders when the middle-order has failed to get their act together on most occasions.

While Team India have been basking in their recent glory, a similar story had unfolded in the England ranks during their disastrous 2018 tour, contributing to the 1-4 defeat. In many ways the contributions of England’s No.8 to No. 11 led to their success.

The fourth Test in Southampton that year is an example of this turnaround. India were going strong, having restricted Joe Root’s men to 86 for six, when the lower order led by Moeen Ali and Sam Curran staged a recovery which saw them reach 246 in their first innings. The turnaround played quite a major role in their triumph.

During the subsequent tour Down Under, the India tailenders made 11 across both innings while the Australians piled up 71 during the visitors’ 146-run loss in the second Test in Perth. This recurrence hurt India’s chances on a regular basis. The inability to wipe out the rival tail was a major concern for a side aspiring to perform better overseas.

A significant turnaround happened in 2020-21 when India toured Australia. They were without Virat Kohli, Mohammed Shami, Jasprit Bumrah and Ravichandran Ashwin in the fourth Test in Brisbane. Yet Australia’s Gabba fortress was breached when India outbowled, and finally when it mattered, outbatted them.

It was the 150 runs India’s last four wickets added in the first innings that turned the Test on its head. From 186/6, the visitors went on to post 336 with No. 7 Washington Sundar contributing 62 and No. 8 Shardul Thakur making 67. Even No. 9 Mohammed Siraj hit a useful 13.

In the second innings, when India were chasing 328, Sundar came to the rescue again and with Rishabh Pant paved the way for the three-wicket series win.

If Pant’s flamboyant presence in the lower middle-order has been a welcome change, the dogged approach of Ashwin, Ishant Sharma, Bumrah and Shami has brought about a swap in fortunes. Ashwin scored a century at No.8 in the second innings against England in Chennai earlier this year, which saw India level the series.

In the final Test of the same series in Ahmedabad, No.8 Sundar (96) and No.9 Axar Patel (43) combined to take India to 365 after being reduced to 146 for six that paved the way for an innings victory.

The tailenders’ (last four batsmen) statistics have also seen a significant improvement. The Indian tail’s contribution has seen them go up to No.2 in aggregate runs since 2020 behind England — 1029 runs from 15 Tests against England’s 1359 from 21 matches.

While India’s tailenders’ average score stands at 14.09, it increases to 23.20 when India end up on the winning side.

The Indian bowlers’ performance against the tailenders has also improved. A consistent line and targeting the stumps have provided rewards. With more options because of a five-man bowling unit, the bowlers do not tend to get tired which Bumrah had highlighted as the reason behind the failure in the World Test Championship final.

A faulty team selection had seen India going into the Test with two spinners, leaving the three pacers with plenty on their plate.

The Indians took the last four wickets conceding 87 runs as New Zealand galloped from 162 for six to 249 all out. Kyle Jamieson and Tim Southee put on 51 runs in just 62 deliveries in the first innings.

Shami and Bumrah turned the fortunes around at Lord’s last month with an unbroken 89-run partnership for the ninth wicket in the second innings. At The Oval, Pant, Thakur, Umesh and Bumrah staged another recovery as the last four wickets put on 154 runs.

India have won most of the matches since 2020 when the tail has wagged. All six 50-plus scores, including a hundred, have come in a winning cause. Indian cricket stands to gain immensely if this trend continues.