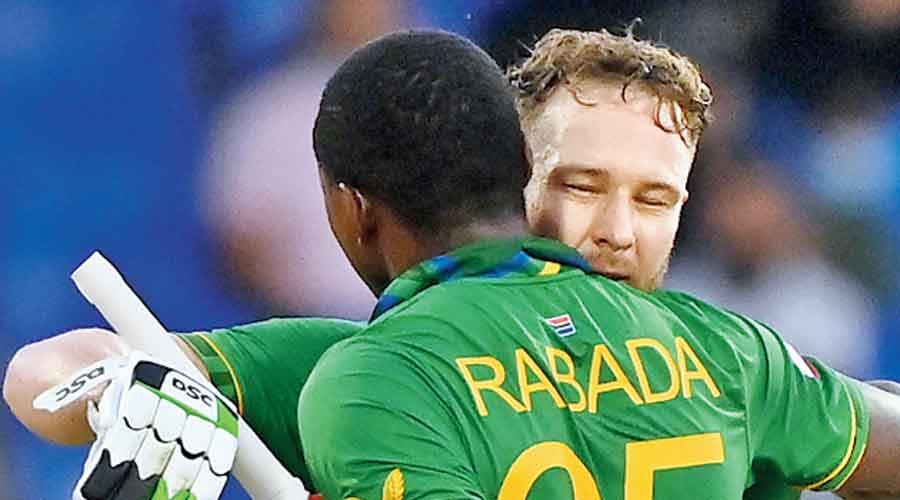 Sri Lanka failed to defend 15 runs in the last over as a scratchy South Africa eked out a four-wicket victory in a thrilling Super 12 match of the T20 World Cup in Sharjah on Saturday.

David Miller turned out to be the hero for the Proteas as his unbeaten 23 off 13 balls handed the Lankans their second successive loss in the tournament.

Chasing a 143-run target, South Africa struggled to negotiate with the Lankan spinners and painstakingly reached 128/6 after 19 overs. With 15 required to win off the final over and Miller having lower-order batter Kagiso Rabada for company, the scales were tilted in Sri Lanka’s favour.

Pacer Lahiru Kumara was entrusted with the ball to bowl the last six deliveries. Rabada stole a single off an inside edge off the first ball to give the strike back to Miller. The left-handed batter then killed off the contest with back-to-back sixes of the second and third deliveries. With 13 coming from the first three balls, South Africa needed just 2 from the last three. A single and a edged four past the keeper off Rabada’s bat did the needful for the Proteas.

The islanders would regret the result after leg-spinner Wanindu Hasaranga (3/20) bowled superbly and took a split hat-trick to give them an edge in the contest. His effort went in vain though.

Proteas skipper Temba Bavuma (46) was the top scorer for his side. Wicketkeeper-batsman Quinton de Kock, who returned to the side and took a knee before the match as well, made 12.

The 23-year-old Pathum Nissanka was the lone Sri Lankan to shine with the bat, hitting 72 off just 58 balls.