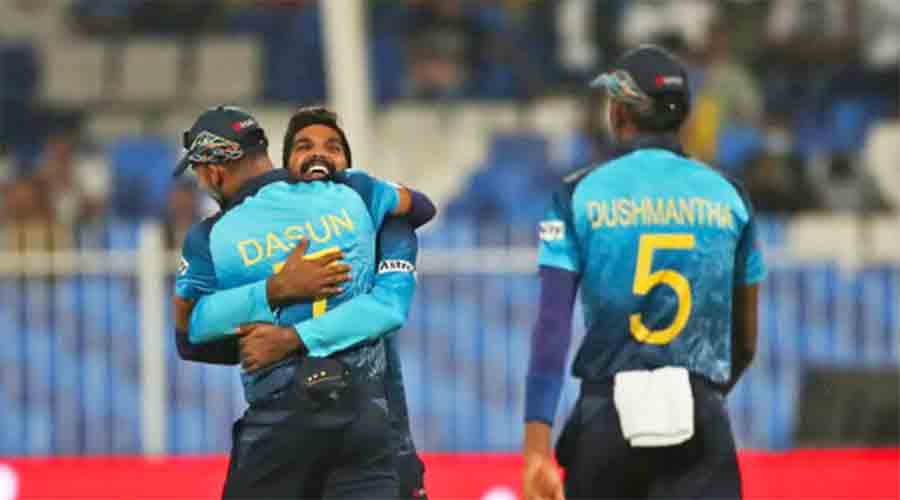 While Sri Lanka topped Group A with three wins out of as many games, Bangladesh finished second in Group B behind Scotland.
Twitter/ @ktnewslive
Agencies   |   Sharjah   |   Published 24.10.21, 03:07 AM

Sri Lanka will rely heavily on their bowling unit to make up for its relatively weak batting department, while Bangladesh would look for consistency when the two teams clash in a Super 12 Group 1 match of the T20 World Cup here on Sunday.

Both Sri Lanka and Bangladesh had to go through the first round group stage to secure their places in the Super 12. While Sri Lanka topped Group A with three wins out of as many games, Bangladesh finished second in Group B behind Scotland.

Sri Lanka defeated Namibia by seven wickets, before beating Ireland by 70 runs. In their last qualifying match against Netherlands, they skittled out the opposition for 44 and then accumulated the runs with eight wickets in hand.

Bangladesh, on the other hand, were far from impressive. Scotland stunned them by six runs in their opener before they scraped past Oman by 26 runs and then defeated Papua New Guinea by 84 runs to qualify for the Super 12.

But the road ahead would be tough for both Sri Lanka and Bangladesh. The two teams will have to go past the challenges of other Group 1 sides England, Australia, defending champions West Indies and South Africa if they wish to go deeper into the tournament.

Going forward, Sri Lanka will have to deal with their stuttering top-order. After successive failures against Namibia and Ireland, Dinesh Chandimal lost out his place to Charith Asalanka, who didn’t help his cause either, scoring just 6 in the low-scoring game against Netherlands.