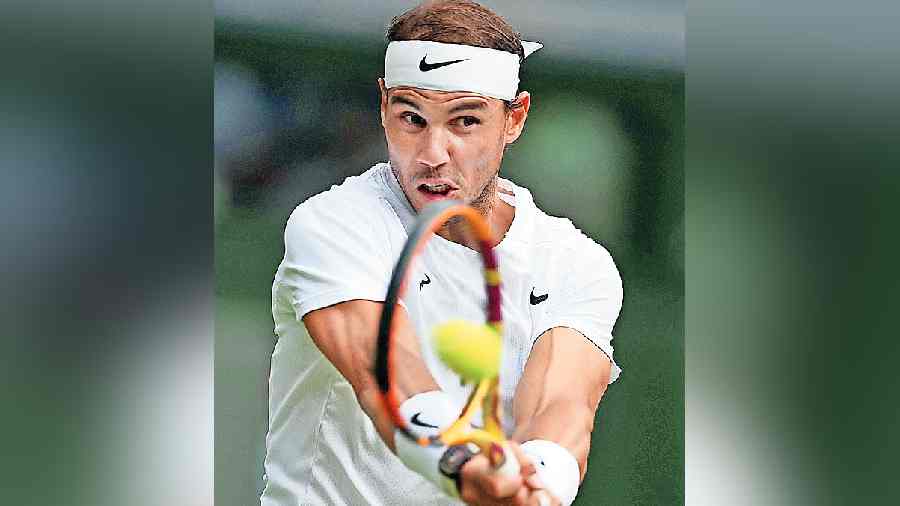 An irritated Rafael Nadal’s pursuit of a rare calendar Grand Slam gathered momentum on Saturday as he took it upon himself to reprimand Lorenzo Sonego before condemning the Italian to a 6-1, 6-2, 6-4 defeat in the Wimbledon third round.

The second seed had dropped a set in each of his previous two matches at the grass court major but on day six he appeared to be on a mission to get the match done and dusted before darkness set in.

But when Sonego convinced officials to close the roof so that the floodlights could be turned on, with the 36-year-old Spaniard leading 4-2 in the third set, Nadal did not appear happy.

Upon resumption, the Italian riled him further by grunting in the middle of a rally after hitting a spectacular shot. Nadal ended up dropping his serve for the first time in the match and, like a stern headmaster, he beckoned Sonego to the net and gave him an earful about the etiquette of tennis.

Post match, after the players shook hands, another lengthy discussion took place at the net as a visibly upset Sonego tried to understand exactly what he had done wrong.

Moments later Nadal was quick to downplay any bad blood between the duo. “I feel really bad now if I bothered him so I feel sorry for that. That’s it — I will talk to him after but this is not a problem,” said Nadal.

Until the brief interruption to close the roof, Nadal’s serve had proved to be impenetrable. Nadal, who had relied on anaesthetic injections to his feet to carry him to a 14th French Open title last month, moved with ease on Saturday to dispatch the 27-year-old Italian and take a step closer to a men’s record-extending 23rd Grand Slam title.