India will next take on either Korea or Denmark 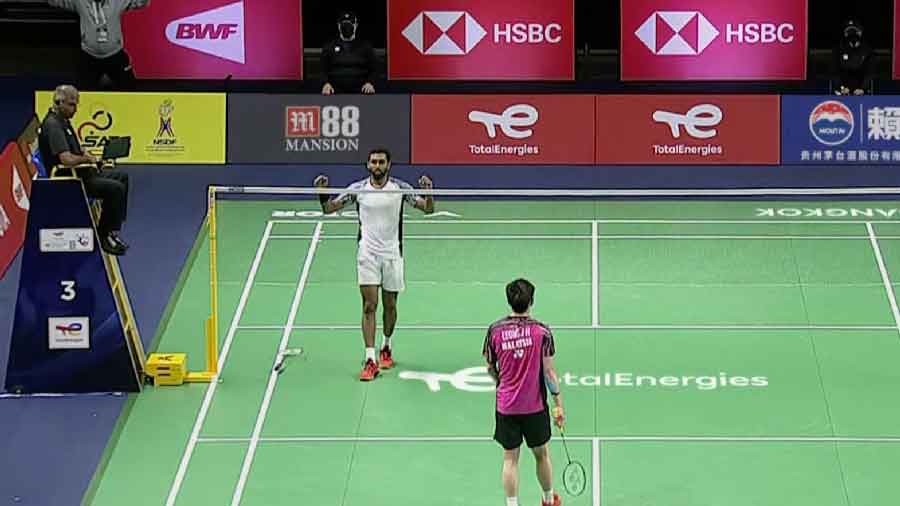 The Indian men's badminton team scripted a memorable 3-2 win over Malaysia to enter the semifinals of Thomas Cup for the first time in 43 years but the women's side bowed out after losing 0-3 to Thailand in the Uber Cup here on Thursday.

India is thus assured of at least a bronze at the Thomas Cup. The country has not won a medal at the event since 1979.

India had bagged three bronze in the past when they reached inter-zonal finals. However, it is the first time since the change in the qualifying format that the country won a medal at the prestigious tournament.

Up against a team that has won the title five times, the world number 8 pairing of Chirag Shetty and Satwiksairaj Rankireddy, world championships silver medallist Kidambi Srikanth and HS Prannoy rose to the occasion to see India home.

India will next take on either Korea or Denmark.

A lot of expectation rode on world championships bronze winner Lakshya Sen but he couldn't go the distance in the opening singles, losing 21-23 9-21 to reigning world champion Lee Zii Jia in 46 minutes.

With the Malaysian fans thronging the Impact Arena, Chirag Shetty and Satwiksairaj Rankireddy took to the court and the duo dished out a superlative performance to outwit world number 13 Goh Sze Fei and Nur Izzuddin 21-19 21-15 to bring India back in the five-match tie.

It was an all-out attack in the final phase of the second game which saw the Indian pair set up five match points with Chirag converting with a smash, leaving the Indian camp all pumped up.

Srikanth rode on his superior and varied strokeplay to outclass world number 46 NG Tze Yong 21-11 21-17 and give India a 2-1 lead.

The world number 45 combination of Krishna Prasad Garaga and Vishnuvardhan Goud Panjala were handed the task of taming Aaron Chia and Teo Ee Yi and the Indian pair produced a good effort before losing 19-21 17-21 as the match went into the decider.

World number 23 HS Prannoy was all fired up in the final contest as he handled the pressure to erase an 1-6 deficit early in the first game to eventually canter to a 21-13 21-8 win over 22-year-old Jun Hao Leong as India completed a fantastic come-from-behind victory.

The moment Prannoy unleashed a smash to seal the contest, his teammates entered the court and rejoiced.

Earlier, double Olympic medallist P V Sindhu fought hard before losing to Ratchanok Intanon as the Indian women's team crashed out of the Uber Cup Finals after being drubbed 0-3 by Thailand in the quarterfinals.

World No. 7 Sindhu was off colour for the second consecutive day as she squandered a one-game lead to go down 21-18 17-21 12-21 against Intanon, ranked eighth, in a 59-minute first women's singles match.

India were down 0-2 when the women's doubles pair of Shruti Mishra and Simran Singhi lost 16-21 13-21 against the Thai pair of Jongkolphan Kititharakul and Rawinda Prajongjai.

It was no better for Aakarshi Kashyap, who surrendered 16-21 11-21 to Pornpawee Chochuwong in the second singles match that lasted 42 minutes, as Thailand completed a 3-0 thrashing, making the remaining two matches of the tie redundant.