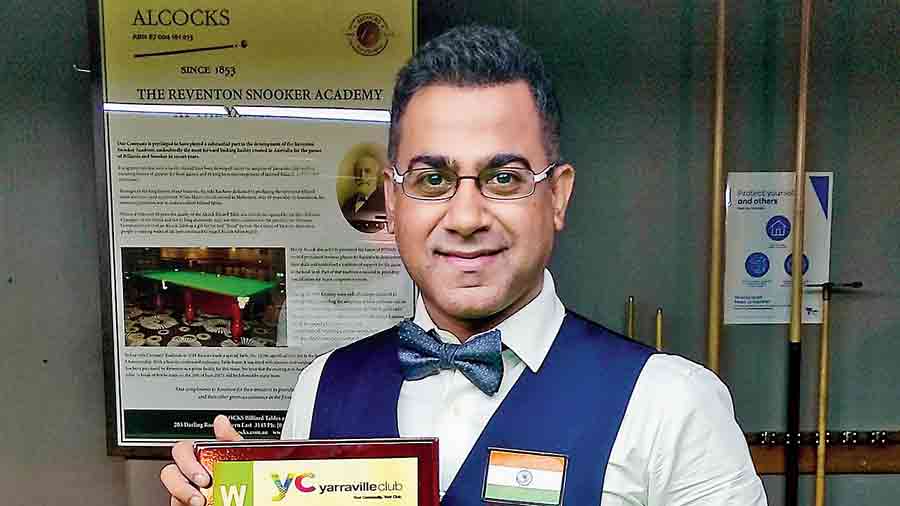 Sourav Kothari after winning the 2022 Lance Pannell-Pacific International Snooker Championship in Melbourne on Monday
Sourced by The Telegraph
Our Bureau   |   Published 14.06.22, 01:44 AM

World billiards champion Sourav Kothari of India has won the 2022 Lance Pannell-Pacific International Snooker Championship, successfully defending the title he had bagged in 2019.  In the final in Melbourne on Monday, Kothari defeated top-ranked Australian cueist Johl Younger 4-0 in the best-of-seven frames encounter with a high break of 93 in the third frame.

The highlight of Kothari’s performance throughout the tournament was his immaculate defence game coupled with good break building every time he was given an opportunity.

This is one of the biggest snooker events of Australia and witnessed the participation of top ranked players such as Steve Mifsud, James Mifsud, Peter Gilchrist and Rob Hall.

After topping his league, Kothari defeated Australian Cale Barrett 3-1 in the quarters and the talented Charlie Chafe 3-1 in the semi-finals.

Kothari will now participate in the 2022 Pacific International Billiards starting on Tuesday, also in Melbourne.