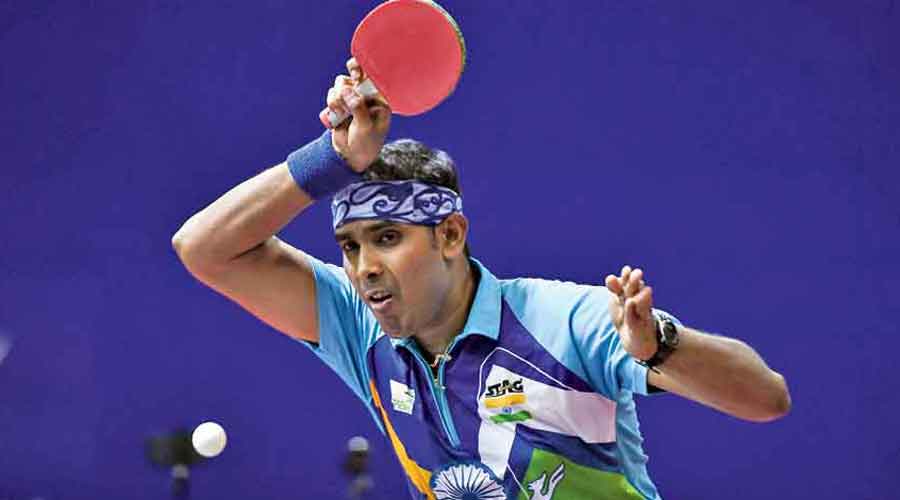 Sharath Kamal is “heartbroken” that his favourite Roger Federer has been surpassed by Rafael Nadal. But he still chose to share a picture of Nadal and himself on Twitter on Sunday, congratulating the Spaniard on his 21st grand slam triumph.

“Yes, I am heartbroken but my tweet was a salute to a great champion,” India’s table tennis star told The Telegraph from Dusseldorf, Germany, where he is playing in the local league. “He is an incredible player.”

The picture Sharath shared was from the 2008 Beijing Olympic Games, but that’s not the only time he bumped into Nadal.

“The first time I met him was in Barcelona in early 2008. He had come to the national training centre after the Australian Open (Nadal had lost to Jo-Wilfried Tsonga in the semi-finals). My teammate Alfredo Carneros and myself were also there and Carneros knew Carlos Moya (Nadal’s primary coach since 2016). We had an interaction and I was blown over by his humility. I don’t have any picture of that meeting since it was a strict ‘no, no’ from the Nadal camp. There is an amazing aura around the man,” he said.

Sharath Kamal (left) with Rafael Nadal during the Beijing Olympics in 2008.
Twitter

Sharath was then playing for San Sebastian de los Reyes in the Spanish League.

Within months, Sharath met Nadal again, this time in Beijing. “It was after his memorable Wimbledon win against my hero Federer. He was mobbed by all the athletes and everyone wanted a share of the great Rafa. I walked up to Nadal and asked if I can get a snap with him and he happily obliged. Frankly, I did not have the courage to tell him about our Barcelona meeting. I thought he might not even remember,” Sharath said.

“The Olympic Games Village is the place where you have the chance to meet world champions. Like in Athens, I had the opportunity to get a glimpse of Federer. He was having lunch and I sat as close as possible when I saw him. Fan-boy moment as they say these days,” he said laughing.

At 39, Sharath is still going strong, like Nadal, Cristiano Ronaldo and Lionel Messi.

“Sports science has developed by leaps and bounds and that helps old warhorses. If you can stay fit, physically and mentally, you can continue. Here again Nadal is an antithesis to that. He struggles with injuries but still manages to come back and surprise you. That’s the greatness of a great champion,” Sharath said.