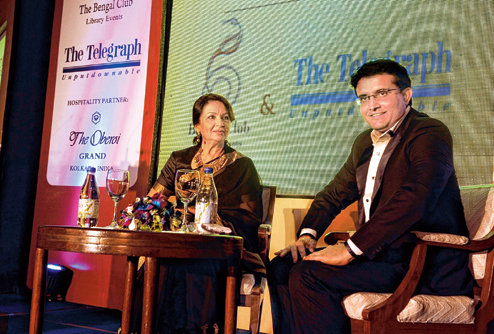 Air India presents Tiger Pataudi Memorial Lecture, a joint initiative by The Bengal Club & The Telegraph in association with The Oberoi Grand Kolkata, will be held on the evening of Monday, March 2. Former India captain Mohammed Azharuddin will deliver the Lecture, part of a series that began in 2012. Former Pakistan captain Imran Khan was the speaker at the inaugural event, followed in subsequent years by Greg Chappell, Sourav Ganguly, Kapil Dev, Mike Brearley, Bishan Singh Bedi, Courtney Walsh and David Gower. The Telegraph replays some key moments from the past lectures.

India has to decide soon whether it prefers glamour, Bollywood and money to Test cricket. In my 20 years of cricket, I never made so much money as a mediocre player in T20 does today. I’ve nothing against players making money but cricket shouldn’t suffer. You’ve got to balance the two. A youngster can easily get swayed by the frenzy that T20 cricket has developed. Bollywood, packed stands when compared to the empty stands and toil of Test cricket. Little does he realise then that the way you prepare for T20 is hugely different to Test cricket. Youngsters should remember that world cricket is judged on Test cricket and not T20.

India, in cricket, should be as strong as Brazil in soccer. Excellence and success are never an accident. Choice and chance determine destiny. Tiger (Pataudi) agreed that for India to be a champion and super power in cricket, some things needed to change. For India to be successful, the team had to win overseas. Tiger was one who had a plan and knew their strength lies in spin.

To me Tiger Pataudi was the greatest India captain... He shunned regional bias, which was so prevalent when he first became the captain and chose an India team. Trust, transparency and giving your team the freedom. These are the three most important things of leadership. Been an Indian team captain is not an easy job. It’s a pressure job. You have to have in yourself to be a leader. Only the strong and desired ones take up the job. I personally never believed in strategy. You cannot plan things. Captaincy is an on-the-field job. I had faith in Virender Sehwag, Harbhajan Singh, Yuvraj Singh and Zaheer Khan. I told them what I want from them. And the same thing I said at the selection committee meetings. I was transparent.

Forget being the captain, I was part of the 1983 World Cup team. We started something unique in this country. It was a part of the process we started in our country. Believing in yourself. “It’s the self-belief about achieving something in sport, not just cricket. We started believing that we can achieve and that's the best thing to have happened in 1983... My team is your team as well.

I do not see Decision Review System (DRS) as a conflict between the truth and authority. Challenge does not mean lack of respect. We can get closer to the truth by using technology, without undermining authority. Players and umpires want DRS. If technology can tell us things that the human eye cannot, then we should use it, not only to reverse howlers, but also to get a higher percentage of decisions right.

I’ve always maintained that Tiger (Pataudi) was 50 years ahead of his time. The type of dressing room atmosphere that was there then, prevails now. His impact is still floating around. The Control part in the BCCI has to go. Why not Indian Cricket Board? Why should anyone control? Cricket is a way of showing freedom of expression. There’s no control element in other boards.

I played with two of the greatest batsmen who went on to become captains, Vivian Richards and Brian Charles Lara. They have been pretty successful. So I don’t believe superstar status would be any hindrance to be a good leader. Only things is you learn with time and you get mature. The difference between Viv and Lara was that Viv didn’t like losing as a player and as a leader.

The game has evolved, grown and has moved on. It’s more professional. We know the difference IPL has made to the BCCI, the franchise owners and may be the entire nation as well. Money is not everything we know that, but the game is prospering. Look at the man who I think is the best player in the world currently. None other than Virat Kohli... If you look at Virat, he has set new standards of performance.