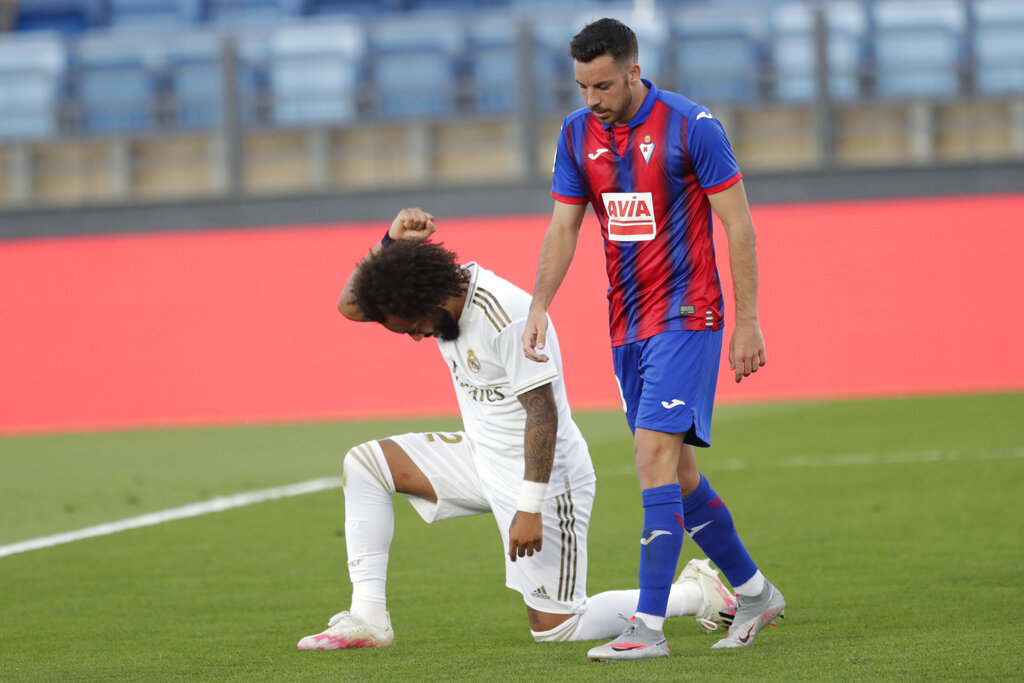 Real Madrid's Marcelo takes a knee as he celebrates his goal during the Spanish La Liga match between Real Madrid and Eibar at Alfredo di Stefano stadium in Madrid
(AP)
Reuters   |   Madrid   |   Published 16.06.20, 02:18 AM

Real Madrid made a winning return to La Liga action on Sunday as they beat Eibar 3-1 to close the gap with Barcelona at the top of the table back to two points.

Toni Kroos got Real off to an ideal start at the Alfredo Di Stefano Stadium by scoring in the fourth minute while captain Sergio Ramos struck on the half-hour mark before Marcelo netted in the 37th.

The Brazilian celebrated by taking a knee and raising his right fist, an apparent tribute to the worldwide Black Lives Matter campaign.

Marcelo’s gesture made him one of the few players in the Spanish league to make public their support for the movement which has protested police brutality after George Floyd’s death in the US. Valencia’s players last week had also taken a knee before a training session to show their support.

Real did ease off after the interval and Eibar forward Sergi Enrich struck the woodwork before Pedro Bigas pulled a goal back for the visiting side on the hour mark.

Real coach Zinedine Zidane used all five of his substitutions as his players continued to tire.

The win kept Real on Barcelona’s heels with 59 points after 28 games. The Catalonian giants are on 61 points.

“We are very happy with the three points and that things are starting to get back to normal,” said Ramos. “It was a bit weird for everyone to return after such an awful crisis. It’s been a strange situation, but at last we’re back. Football is very important to everyone and to be able to step on the grass again gave us immense joy.”

With Real’s Santiago Bernabeu stadium being revamped, Zidane’s men restarted the campaign at the 6,000-capacity Di Stefano Stadium where their reserve side play.

Real are usually greeted by a throng of supporters when their bus arrives at the Bernabeu but they faced a far more relaxing journey on Sunday as they walked 300m from their residency at the training ground to the stadium.

Champions League hopefuls Real Sociedad were held to a 1-1 home draw by Osasuna.

Bayern one win away

Werder Bremen are on the brink of relegation but they should not expect any rescue gifts from Bayern Munich when they meet on Tuesday with the Bavarians eyeing their eighth consecutive league title, Bayern coach Hansi Flick said on Monday.

Bayern will secure the league crown for the 30th time if they beat former domestic rivals Werder in Bremen.