BRIEFS: Nadal nabbed his third title to go with victories in 2013 and 2005 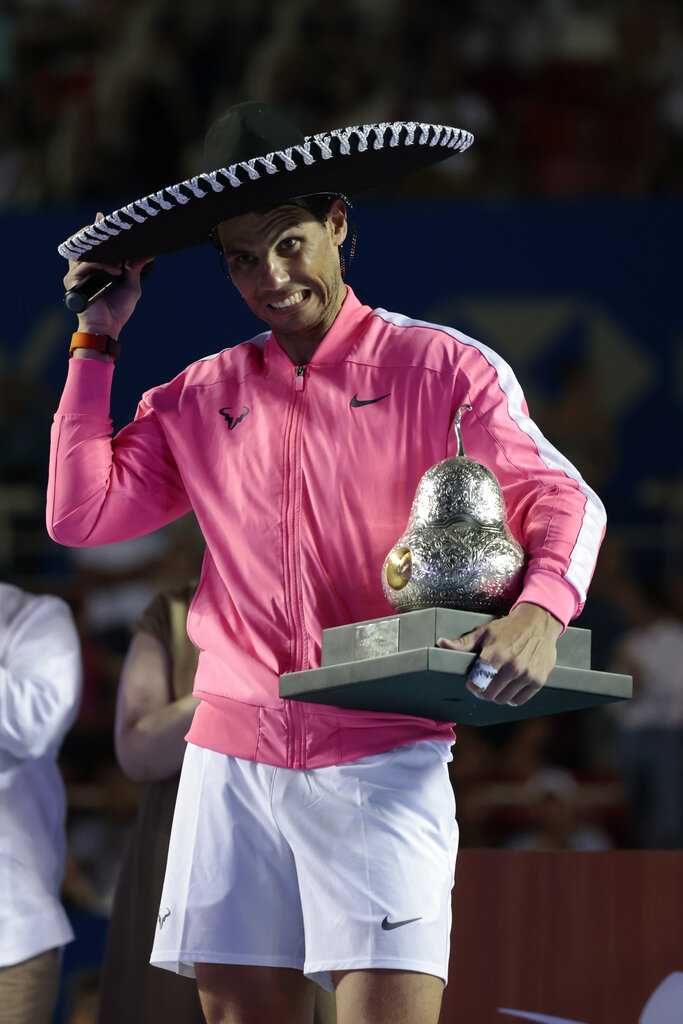 Rafael Nadal captured his first title of 2020, defeating unseeded Taylor Fritz 6-3, 6-2 in the final of the ATP Mexico Open on Saturday. Nadal made eight unforced errors and needed just one ace but it came in the final game of the second set to get to championship point. Nadal nabbed his third Mexico Open title to go with victories in 2013 and 2005.

Bangladesh beat Zimbabwe by 169 runs in the first ODI to take a 1-0 lead in a three-match series at the Sylhet International Cricket Stadium on Sunday. Opener Liton Das struck 126 off 105 balls to guide Bangladesh to 321 for six before Mohammad Saifuddin claimed 3/22 to help the home side bowl out Zimbabwe for 152.

A maiden international century by Heinrich Klaasen set up a 74-run win for South Africa in the first ODI against Australia at Boland Park. Klaasen hit 123 not out in a South African total of 291 for seven. Australia were on target midway through their reply but lost their last seven wickets for 43 runs to be bowled out for 217 on Saturday.

South Africa and England registered comfortable victories against Pakistan and the West Indies, respectively, on Sunday to seal their spots in the semi-finals of the Women’s Twenty20 World Cup. Group A leaders India were the first to reach the last four and the final place will go to the winner of Monday’s clash between hosts Australia and New Zealand.

Sheldon Jackson struck a gritty hundred before the bowlers shone as Saurashtra gained the upper hand on the second day of their Ranji Trophy semifinal against Gujarat here on Sunday.

Jackson’s knock of 103 helped Saurashtra post 304 and then the home team wreaked havoc on Gujarat to reduce them to 119 for six.

Kylian Mbappe scored twice and grabbed an assist as Ligue 1 leaders Paris Saint-Germain coasted to a 4-0 win over Dijon despite the absence of the suspended Neymar. Pablo Sarabia struck the opener inside three minutes. Dijon held out for 70 minutes before PSG added a second through Mbappe. The France international then set up Mauro Icardi for a third goal.

Atletico Madrid’s poor domestic form continued as they could only draw 1-1 away to La Liga’s bottom side Espanyol on Sunday. Diego Simeone’s side struggled against a determined Espanyol and fell behind through an own goal from Stefan Savic in the 24th minute but the visitors levelled in the 47th through a fantastic volley from Saul Niguez.

Thierry Henry’s Major League Soccer managerial career got off to a winning start as Montreal Impact came from behind to defeat New England Revolution 2-1 in their season-opener. A superb lobbed 80th-minute finish from Maxi Urruti secured all three points for the Impact, who appointed former France star Henry as manager in November.

Noted athletics coach Joginder Singh Saini, who has groomed some of India’s finest track and field stars, died here on Sunday. He was 90. Saini received the Dronacharya in 1997 for his contribution to Indian athletics. Saini was the one who encouraged Gurbachan Singh Randhawa, who won an Asian Games gold medal in 1962, to take up decathlon.

n New Delhi: Former India hockey player Balbir Singh Kullar, who was a part of the 1968 Olympics bronze-winning team, passed away in Punjab on Friday at the age of 77 after suffering a heart attack. Kullar was also a member of the Indian team that won the Asian Games gold in 1966 (Bangkok).

Britain's Tommy Fleetwood birdied four of the last six holes, including two spectacular birdie putts from beyond 40 feet, to grab a one-stroke lead after the third round of the US PGA Honda Classic.