Second-placed United are now on 70 points from 34 games, while fifth-placed West Ham are on 58 from 35 matches 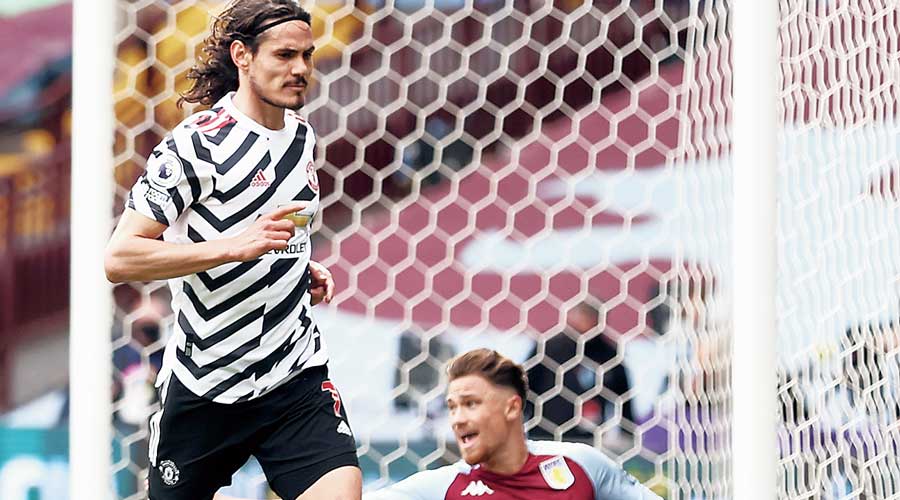 Also, with West Ham suffering a 0-1 home defeat to Everton in another match, United are now guaranteed of a top-four finish and with it a Champions League berth.

Second-placed United are now on 70 points from 34 games, while fifth-placed West Ham are on 58 from 35 matches. Leaders City are on 80 points.

City would have clinched the title on Sunday if United lost, and that scenario was on when Bertrand Traore put Villa into the lead in the 24th minute.

United were more energised in the second half and a 52nd-minute penalty by Bruno Fernandes — his 17th goal of the campaign — was followed four minutes later by a strike by Mason Greenwood.

Substitute Edinson Cavani headed in a third goal in the 87th, and Villa had striker Ollie Watkins sent off in the 89th for picking up a second yellow card after he was adjudged to have dived.

City still need three points from their final three games to seal a third league championship in four years under Pep Guardiola, and a fifth in 10 seasons in total. Only a monumental collapse by City side could open the door if United won all their matches. United could, however, hand the title to City by losing either of their games on Tuesday and Thursday — against Leicester and Liverpool, respectively.

Ole Gunnar Solskjaer now faces the task of juggling his United squad after being handed a tough week-long schedule as a result of the requirement to rearrange its match against Liverpool.

The game was postponed last weekend because of fan protests at Old Trafford against the club’s American owners. The rearrangement has left United facing three league games in a five-day span.

Captain Harry Maguire might not be available after hobbling off with an ankle injury in the second half.

Lewis Dunk fired the visitors ahead in the 13th minute.

The hosts drew level in the 76th when substitute Adama Traore fired home from close range. Gibbs-White sealed the victory for Wolverhampton in the 90th.