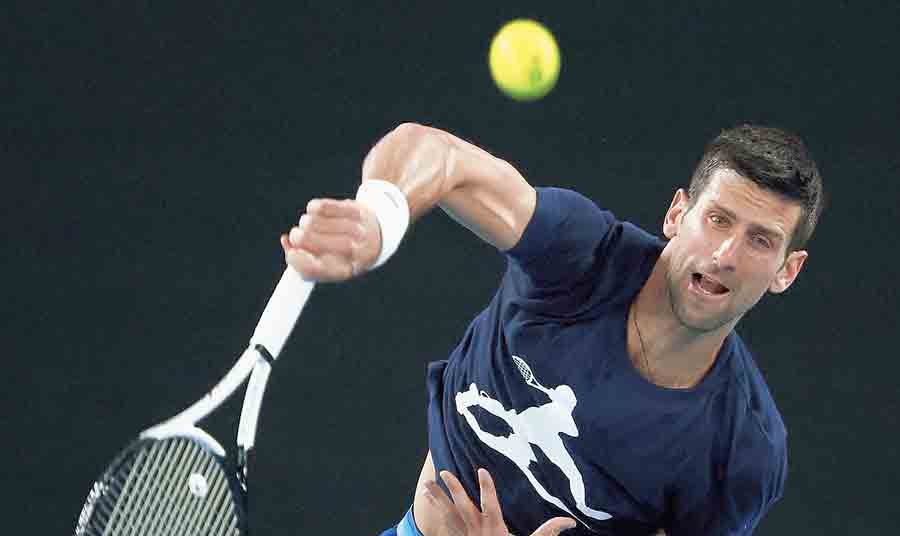 Novak Djokovic finally boarded a plane on Sunday to take him out of Australia, losing the chance of a record-setting campaign in the season’s first grand slam after a last-ditch attempt at a legal reprieve failed.

On the eve of the Australian Open set to begin on Monday, the Federal Court upheld a government decision to cancel his visa on the ground that his stance of not to be vaccinated against Covid-19 posed a risk to the country.

The ruling by a three-judge bench was unanimous.

“I respect the Court’s ruling and I will cooperate with the relevant authorities in relation to my departure from the country,” Djokovic said in a statement.

Djokovic, 34, had appealed against immigration minister Alex Hawke’s use of discretionary powers to cancel his visa. The minister had said Djokovic could be a threat to public order because his presence would encourage anti-vaccination sentiment amid Australia’s worst outbreak of the virus.

Chief Justice James Allsop said the court ruling was based on the lawfulness and legality of the minister’s decision in the context of the three grounds of appeal Djokovic’s legal team lodged.

The three judges deliberated for more than two hours before Chief Justice Allsop delivered the verdict just before 6pm in Melbourne, stating: “The orders of the court are, one: the amended application to be dismissed. Two: reasons to be published at a later date.”

And in that statement lies the word that has been perhaps lacking in the whole saga that started the minute Djokovic was granted an exemption to play in the Australian Open — reasons.

The Australian government has much to explain. Granted Djokovic should have taken the vaccine and made life easier for all concerned. But why was he granted an exemption by a “rigorous review process involving two separate independent panels of medical experts” as claimed by the Australian Open organisers?

The fact that the world No.1 player was granted that exemption on January 4 but was not allowed to enter the country when he reached Melbourne on January 6 defies all logic. Craig Tiley, Tennis Australia CEO and Australian Open director, had constantly maintained that they had followed all rules and protocol set down by the Australian government while granting the exemption. He was either living in a fool’s paradise or was just desperate to feature the best player in the world, eyeing records, in his grand slam.

Star value, after all, matters. Without Roger Federer in the mix and Rafael Nadal not really in top form, top-seed Djokovic was supposed to be the main crowd puller.

Putting Djokovic in detention after grilling him for hours on arrival will not do much for Australia’s reputation. There surely must have been better ways of handling the situation without making it an issue of international relations. Serbia, understandably, rallied behind its favourite son.

And then the judgments — two very contrasting ones within days.

On January 10, in a virtual court hearing, Federal Circuit Court Judge Anthony Kelly reinstated Djokovic’s visa and freeing him from detention giving rise to the hope that he may finally be able to play in the Australian Open. But on Sunday, Chief Justice Allsop’s ruling went with the government’s stance.

That, too, raises questions as to what has been changing so rapidly in the background for such conflicting scenarios to emerge.

Australian Prime Minister Scott Morrison, preparing for an election due by May, welcomed Sunday’s court ruling, saying the decision will help “keep our borders strong and keep Australians safe”.

“It’s now time to get on with the Australian Open and get back to enjoying tennis over the summer,” he said in a statement. However, how Djokovic could have been a “health hazard” has not been spelt out.

Whether Djokovic could have earned his 21st major singles titles to edge ahead of Federer and Nadal in Melbourne can and will be debated for days around the world. But there can be no debate that this whole issue could have been handled better by the authorities in Australia. For starters, the exemption itself should not have been granted to Djokovic without all stakeholders being on the same page.

Novak Djokovic’s statement after he was deported on Sunday:

I will now be taking some time to rest and to recuperate, before making any further comments beyond this.

I am extremely disappointed with the Court ruling to dismiss my application for judicial review of the Minister's decision to cancel my visa, which means I cannot stay in Australia and participate in the Australian Open.

I respect the Court’s ruling and I will cooperate with the relevant authorities in relation to my departure from the country.

I am uncomfortable that the focus of the past weeks has been on me and I hope that we can all now focus on the game and tournament I love.

I would like to wish the players, tournament officials, staff, volunteers and fans all the best for the tournament.