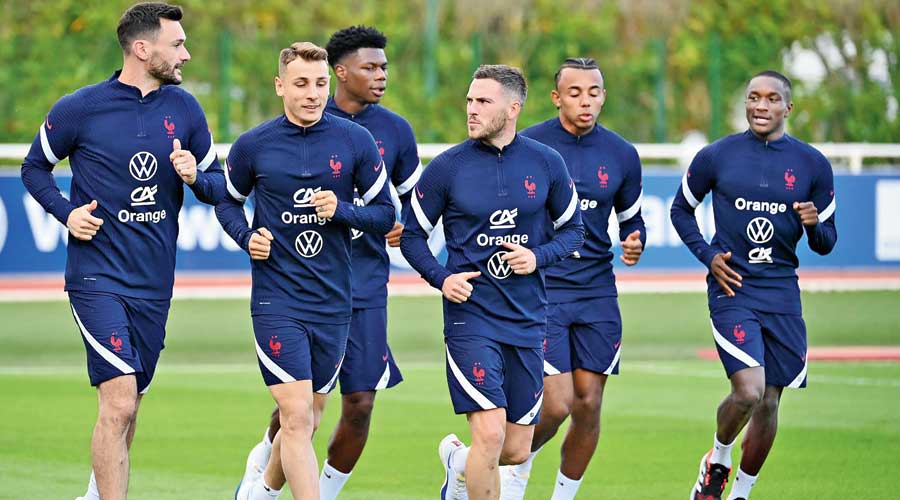 Most conversations about the Belgium national team in recent years have involved the words ‘golden generation’.

It is easy to see why, with world-class talent like Kevin De Bruyne, Eden Hazard and Romelu Lukaku in the squad and the team sitting top of Fifa’s world rankings for more than three years.

But after three quarter-final exits in their last four major tournaments and a third-place finish at the 2018 World Cup, the Red Devils are still waiting for their first major honour ahead of Thursday’s Nations League semi-final against France in Turin.

While manager Roberto Martinez is likely to rely on many familiar faces this week, his squad also involves a contingent of the new generation of Belgians, including in-form AC Milan winger Alexis Saelemaekers.

The 22-year-old will be determined to make an impression in his adopted country, after breaking into the Belgium side during last month’s international break.

Saelemaekers established himself as a key member of Stefano Pioli’s Milan side last season, helping the Rossoneri finish second in Serie A, and has featured in every game for the Italian club in 2021-22.

“I have grown a lot thanks to the advice of Pioli and the work I did last year,” Saelemaekers told Milan TV last week.

His quality on the ball, work-rate and tactical flexibility have made Saelemaekers an important asset for Pioli and, since last month, an option for Martinez too.

The Milan man missed out on Euro 2020 but was named on a reserve list, despite only previously featuring for his country once in a 2020 friendly against the Ivory Coast.

But he was given a chance during the September international break and took it.

The winger started in World Cup qualifiers against Estonia and Belarus, setting up Denis Praet’s winning goal against the latter, and came off the bench to score against the Czech Republic.

Saelemaekers faces competition for a starting spot from Leicester City’s Timothy Castagne but is seen as one for the future and he is not alone.

Apart from them, Rennes’s 19-year-old winger Jeremy Doku is injured and 20-year-old Anderlecht midfielder Yari Verschaeren missed out due to the limited squad size, but both have displayed great potential.

If Belgium can find a way past world champions France, they will set up a final on Saelemaekers’s home turf at San Siro, a place where he has become an unexpected favourite since joining Milan from Anderlecht in January 2020.

“He was the fruit of our scouting network,” Milan technical director Paolo Maldini said.

“We were looking for a right back at the time and we saw this kid who played on the right, on the left, as a fullback, as a number 10, with such intensity that by the time you get the ball from him he is already there.”

Didier Deschamps was coach Aime Jacquet’s voice on the pitch when France won the World Cup in 1998, but now he is the one sitting in the dugout he has found his own trusted lieutenant in Paul Pogba.

The Manchester United midfielder was Les Bleus’s inspiration in the dressing room when they won the 2018 World Cup and France’s performances have often depended on Pogba’s displays.

At Euro 2020, he scored a goal to put France 3-1 ahead against Switzerland in the last 16, but it was also his mistake that gifted the Swiss an equaliser for 3-3, before France exited on penalties.

It was Pogba who voiced Les Bleus’s frustration after two consecutive draws in the World Cup qualifiers last month, which seemed to have an immediate impact as they went on to beat Finland 2-0.

“He brings his enthusiasm, his dynamism, his good humour,” United teammate Raphael Varane told a news conference, ahead of the match against Belgium.

“He’s got this positive energy and this experience of the highest level that he passes on. Him and me we’re not the oldest ones but not the youngest ones either so we create the link between the generations.”