The mask was dedicated to Taylor, a Black woman killed by police officers who burst into her apartment in March 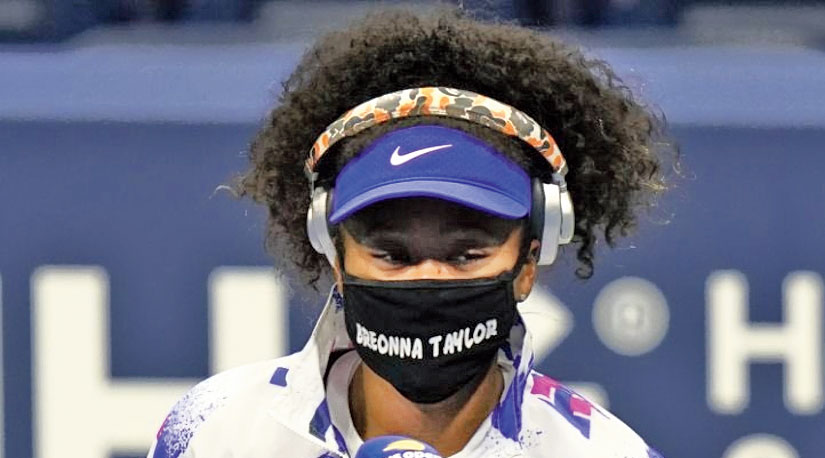 Japan’s Naomi Osaka says she wants to spread awareness about racial injustice after the former US Open champion walked onto court with a mask bearing the name of Breonna Taylor on Monday.

Osaka, who moved to the US as a three-year-old, has seven separate masks with her at Flushing Meadows and hopes to wear a different one at each stage on her path to the final.

The mask she wore in her first-round match against Misaki Doi was dedicated to Taylor, a Black woman killed by police officers who burst into her apartment in March.

“For me, I just want to spread awareness,” the fourth seed told reporters on a video conference.

“I’m aware that tennis is watched all over the world, and maybe there is someone that doesn’t know Breonna Taylor’s story.

“Maybe they’ll like Google it or something. I feel like the more people know the story, then the more interesting or interested they’ll become in it.” Osaka hopes she can get the chance to raise awareness about racial injustice by using each mask during her stay in New York.

“It’s quite sad that seven masks isn’t enough for the amount of names, so hopefully I’ll get to the finals so you can see all of them,” said Osaka, the champion at the 2018 US Open and 2019 Australian Open.

The 22-year-old Osaka has been at the forefront of protests from tennis players against racial injustice in the US. She said she appreciated Open organisers putting up anti-racism artwork and ‘Black Lives Matter’ banners.

“I just feel like we’re heading towards a great direction, and there’s a lot of players that are supporting it,” she added after her 6-2, 5-7, 6-2 win over compatriot Doi.

While Osaka missed the crowd’s energy during tough moments on court, she said the empty stands helped her concentrate as her mind can wander sometimes.  “Like sometimes I will see a person with a cool outfit or something, they’re doing something, and I get distracted.”