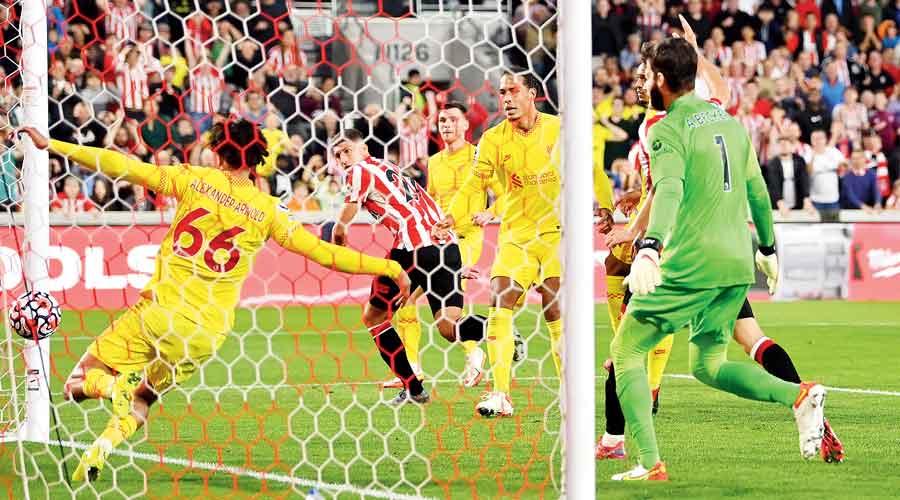 A second-half goal from Gabriel Jesus earned Premier League champions Manchester City a deserved 1-0 win over Chelsea on Saturday and inflicted a first defeat of the season on Thomas Tuchel’s side.

Jesus pushed the ball home with a deflection off Jorginho after a goalmouth melee in the 53rd minute following City’s 10th corner of the game. It was the game’s first shot on target.

The goal sparked the match into life, forcing Chelsea to attack, after a first half of intense pressure from City and defending from the home side.

It was Jesus’s 52nd goal for City and they have never lost a Premier League game in which he has scored.

“We prepared to play well,” he said. “We came to play against one of the best teams in Europe. They play so good and have a lot of amazing players. We knew it was going to be difficult for us”

The victory also broke a three-match losing streak for the Manchester side against Chelsea, the most recent in the Champions League final in Porto in May.

The visitors had pressed Chelsea from the outset and enjoying 70 per cent possession in the first half with Kevin De Bruyne, Jack Grealish and Phil Foden buzzing round the Blues’ area.

There were chances for Grealish in particular to get on the scoresheet as the game opened up, but his attempts flew wide or were blocked by well-timed interventions from Chelsea keeper Edouard Mendy.

At the other end Timo Werner and Marcos Alonso had chances, and Ederson had his share of goalkeeping duties to keep out crosses from Cesar Azpilicueta and snuffing out goalmouth challenges.

“We’re disappointed with the result,” Azpilicueta said. “It was not our best performance. Especially in the first half it was hard to get out. We didn’t create chances and lost the ball too easily. After the goal we had a good reaction, but it was not enough to get something from the game.”

Tuchel admitted his Chelsea side were not good enough.

“We lost the game and City deserved to win. Until the goal we were very strong in the last 20 metres of the field, but only there unfortunately,” Tuchel told reporters.

“Everywhere else we were not good enough to relieve pressure and to hurt them. The performance was not complex enough. Overall, simply, we were not at our best level.”

at a below-par Manchester United.

Kortney Hause’s 88th-minute header put Villa on course for their first league win over United since 2009, but the defender’s handball gifted the Red Devils an opportunity to steal a point, only for Fernandes to miss the target.

Since Cristiano Ronaldo re-signed for United, there has been much debate over who will take penalties and free-kicks this season — last term’s spot-kick taker Fernandes or his fellow Portuguese.

It was Fernandes who took the first direct free-kick, firing into the wall, with Ronaldo getting the next one, and Fernandes, following Hause’s handball, never looked back as he placed the ball on the spot in the 92nd minute.

But last season’s top scorer missed only his second spot-kick for the club to the dismay of an expectant crowd.

“First of all the way they (Villa players) get round the penalty spot, get round Bruno and that, that’s not to my liking,” United manager Ole Gunnar Solskjaer said.

“Bruno is usually very good in those positions and unfortunately he missed this one.”

Striker Mohamed Salah scored his 100th Premier League goal but Liverpool were still held to a draw at Brentford as the two sides played out a 3-3 thriller.

Ethan Pinnock gave Brentford the lead in the 27th minute but that was shortlived as Diogo Jota headed home four minutes later. put his side in front in the 54th with his 100th goal in 151 league appearances for Liverpool.

The Bees levelled in the 63rd minute through Vitaly Janelt. Curtis Jones put Liverpool back in front four minutes later but Brentford snatched a dramatic equaliser through substitute Yoane Wissa in the 82nd minute.