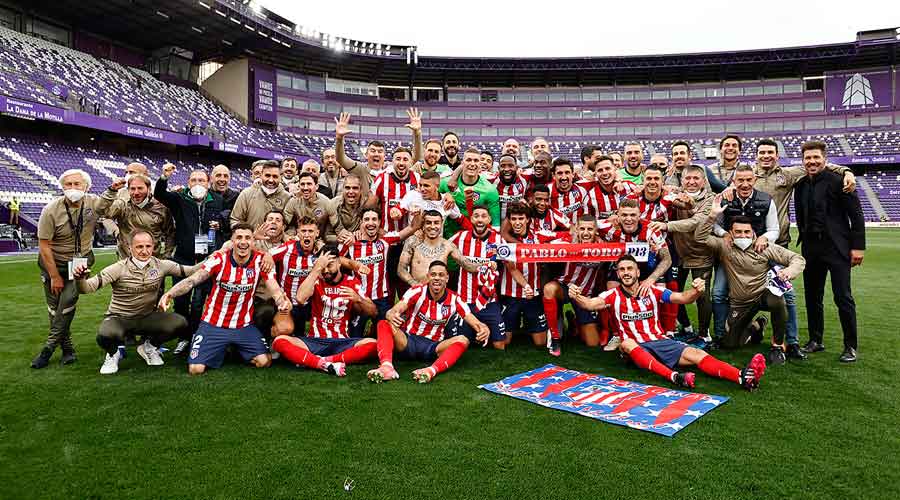 Atletico Madrid pipped city rivals Real Madrid to the La Liga title on Saturday after Luis Suarez fired them to a 2-1 comeback win at Real Valladolid.

Atletico finished top of the standings on 86 points while Real, who snatched a late 2-1 win over Villarreal, came second on 84. Valladolid, owned by Brazilian Ronaldo, finished 19th and were relegated to Spain’s second division.

Valladolid took a shock lead in the 18th minute when Oscar Plano slotted past Jan Oblak to complete a sweeping counter-attack after Yannick Carrasco lost control of the ball following a corner.

Just as they had done in last week’s comeback win over Osasuna, Atletico missed a series of clear opportunities but they drew level after a moment of magic from Angel Correa, who danced his way through the defence before arrowing into the bottom corner in the 57th minute.

Suarez then pounced on a giveaway by the Valladolid defence to score in the 67th and put Atletico on their way to a victory that would secure the title no matter what happened in Real Madrid’s game at home to Villarreal.

to pay after 20 minutes as Pino latched onto Gerard Moreno’s through ball before calmly finishing.

Luka Modric and Casemiro missed good chances for the hosts as the first half drew to a close.

Ten minutes after the restart Karim Benzema thought he had equalised, but his header was ruled out for offisde following a lengthy VAR review. The Frenchman finally scored three minutes from time with a neat finish before teeing up Luka Modric for an injury-time winner to turn the game on its head.

Villarreal end the season seventh, giving them a place in next year’s inaugural Europa Conference League.

An acrobatic late effort from Antoine Griezmann saw Barcelona confirm a third-placed finish, as they crept past already relegated Eibar 1-0.

With the game seemingly destined for a draw, it sparked to life in the closing stages. On 81 minutes Griezmann smashed in from an acute angle following good work from Ousmane Dembele.

They end the campaign on 79 points, seven behind Atletico and five off Real.