The BCCI also announced that fit-again Rohit Sharma would be the vice-captain for the remaining two Tests, taking over the mantle from Cheteshwar Pujara 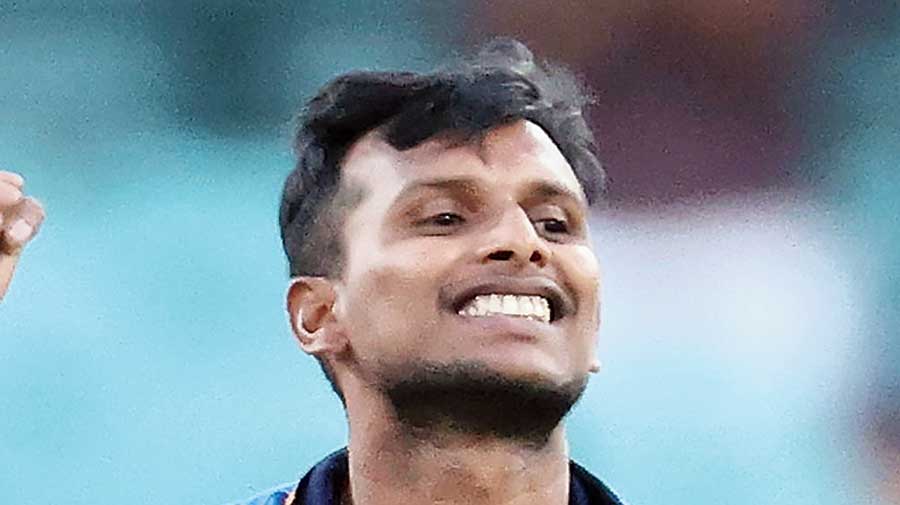 From being a net bowler in the original tour party, the left-arm pacer could return home an international in all three formats.

According to The Telegraph’s sources, it’s most likely that Natarajan will be the third pacer in the XI since he brings variety to the attack.

Umesh has returned to India after sustaining “a strain in his left calf muscle on Day III” of the Boxing Day Test in Melbourne. India now officially have only one net bowler left, rookie Kartik Tyagi, after Shardul Thakur was added to the squad as Mohammed Shami’s replacement last week.

Natarajan, 29, stayed on in Australia with the squad after a successful limited-overs series Down Under. He was the highest wicket-taker among the two sides in India’s T20I series win — six wickets in three games at an average of 13.83 and economy rate of 6.91.

Prior to that, he made his ODI debut in Canberra, finishing with two for 70 in India’s 13-run win as they lost the series 1-2.

Natarajan has featured in 20 first-class games for Tamil Nadu, picking up 64 wickets. His previous red-ball outing came nearly a year ago in a Ranji Trophy fixture against Railways in Chennai.

If Natarajan does make a debut in either Sydney or Brisbane, he will be the first left-arm seamer to turn out in Test cricket for India since Zaheer Khan played his last Test in February 2014 in Wellington.

Umesh and Shami, who fractured his forearm while batting during the series opening Day-Night Test in Adelaide, will undergo rehabilitation at the National Cricket Academy in Bangalore as they launch their bid to be available for the England series at home in February-March.

The BCCI also announced that fit-again Rohit Sharma would be the vice-captain for the remaining two Tests, taking over the mantle from Cheteshwar Pujara.

The squad is expected to leave for Sydney for the third Test on Monday.