This was East Bengal’s fourth victory on the trot 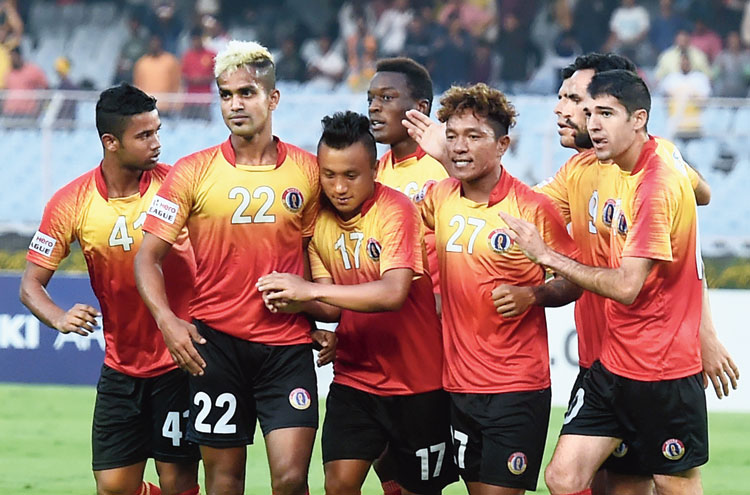 Quess East Bengal produced a sterling display to demolish bottom-placed Lajong FC 5-0 in an I-League encounter at the Salt Lake Stadium on Thursday.

This was East Bengal’s fourth victory on the trot and they are now placed third in the standings, three points behind leaders Chennai City FC, with a match in hand.

Laldanmawia Ralte netted the first hat-trick by an Indian in this season’s I-League, while Joby Justin and Enrique Esqueda were the other scorers.

There was no stopping East Bengal from the outset and it was arguably their best performance this season.

They rode roughshod over the young Lajong side, which included seven U-22 players, and never gave them any opportunity to bounce back. The passing, coordination and anticipation of the home team left the Lajong players flummoxed.

Moreover, there was no let-up in intensity, a fact that was acknowledged by coach Alejandro Garcia as well.

“I am very satisfied with the performance of the team. We played so well. Even after scoring five goals, we continued to play well. We maintained our intensity for the entire 90 minutes,” said Alejandro.

“I am satisfied with everything... Not only the five goals, but also the way we played. From attack to defence, we were compact… Overall, we performed really well,” the coach said.

Laldanmawia, who dedicated the goals to his dad and mom, said he has always been inspired by Shylo Malsawmtluanga. He was also all praise for Alejandro.

“I learn a new thing almost every day from the coach. He gives me the confidence to perform well in every match,” said the soft-spoken Laldanmawia.

Laldanmawia could have struck as early as in the second minute, but his shot was blocked by a Lajong defender. The 26-year-old from Mizoram opened the floodgates in the eighth minute when he headed in a Lalrindika Ralte corner.

Laldanmawia was again in the thick of action in the 26th minute when his lob over an advancing Lajong goalkeeper, after receiving the ball from Borja Gomez, was bang on target.

Joby added to the tally a minute later. A well co-ordinated move saw Kassim Aidara find Antonio Dovale inside the rival territory and the latter lobbed it to Enrique, who got a start after eight matches.

The Spaniard’s goal-bound shot evaded Lajong goalkeeper Tempa Lachenpa, before Joby managed to connect his body as it rolled into an empty net. It was Joby’s ninth goal in the league.

Enrique struck the fourth goal, a minute into first-half injury time. It was the result of a superb finish.

Ralte’s long ball was nicely chest-trapped by Enrique, who then unleashed a side volley that evaded the goalie.

East Bengal’s pressing football continued unabated in the second half, though they could add only one more goal in the session.

Enrique tried to take advantage of Lachenpa, who was standing well outside the box. But the long shot from inside his own half sailed over the crosspiece.

Laldanmawia then completed the hat-trick in the 59th minute. Substitute Jaime Colado dribbled past a Lajong player and placed it on a platter for Joby, but the forward’s dummy in front of the goal allowed Laldanmawia to slot home comfortably.