City of Joy fondly recalls the first time Messi led the Albiceleste in a friendly international against Venezuela in 2011, at its very own Salt lake Stadium 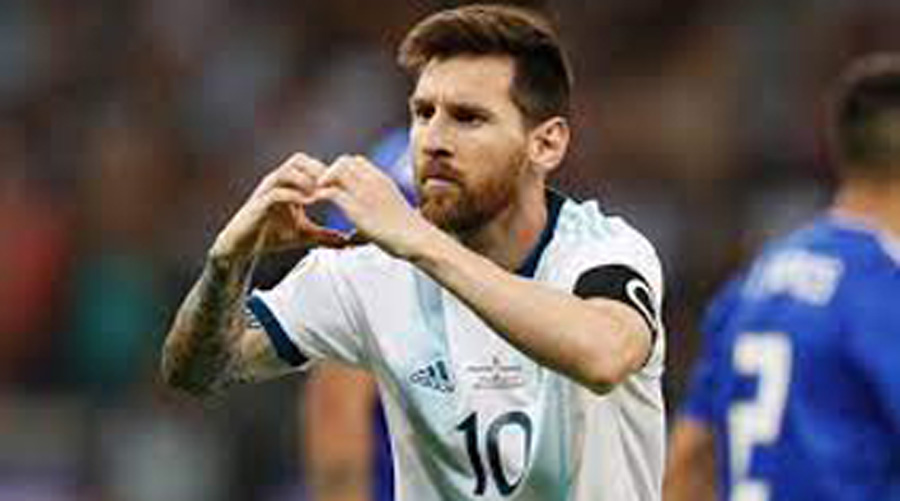 India celebrated in Kolkata as Argentina won in Brazil.

Some 15,000 km from where Lionel Messi held aloft the Copa America trophy, Kolkatans lapped up his jinx-breaking triumph with Argentina, a much-loved team that doesn't know of their intense fandom.

On Saturday night (Sunday morning in India), Argentina beat arch-rivals Brazil 1-0 in their own backyard -- the iconic Maracana Stadium in Rio de Janeiro -- to end the talisman's long wait for a major international title with the national team.

Known for its unwavering loyalty and devotion to Argentina and its captain, the 'City of Joy' fondly recalled the first time Messi led the Albiceleste, in a friendly international against Venezuela in 2011, at its very own Salt lake Stadium.

FIFA-AFC match commissioner Col Gautam Kar, who officiated in that game, has vivid recollections of getting up close with the Argentine superstar when he graced the stadium for the first time during practice.

"He made his first appearance, holding his boots tightly to his heart for the official training -- these are very rare sights from a star of that kind. I still remember the moment," Col Kar told PTI on Sunday. "I was remembering the same sight, when I saw him on TV this morning, hugging his rival Neymar after the match. They were like best of friends but on the field they can't spare even an inch. That's why it's the beautiful game."

"I'm really touched by Messi, since that day. There was a lot of euphoria, Messi, Messi chanting everywhere. But he was so simple, gracious in person, greeting everyone around him. On the field, he looked like a child, but belonged to a different world, watching him with the ball is like seeing someone doing meditation."

Kar remembered calling the famous No 10 during the official pre-match checking, an hour before the kick off.

"When I called out No 10, he came over, showed his card, and left after I said okay, he was so professional and grounded."

FIFA regional office development manager (South Asia) Prince Rufus was the local manager of Venezuela team during the match, but he was constantly looking out for Messi, like everyone else. "We saw him during practice for the first time. There were many legendary Indian former footballers who too were present at the dug-out and everyone was standing in awe. That's Messi," Rufus recalled.

Messi did not exert himself much in that match but his magic was everywhere. It was the current team's central defender Nicolas Otamendi who scored a stunner to kick-start Messi's captaincy with a win before they left for Bangladesh for another friendly.

The city's fans woke up early as celebrations were witnessed in various nooks and corners.

"We hardly slept as we had a grand feast last night and then arranged to watch the match on our roof top," Uttam Saha of Argentina Football Club, based in Gangulibagan, said.

"Messi had reached the final of the Copa America for the fourth time now we desperately wanted him to lift the trophy. Celebrations will continue through the day with drum beats on the streets and distribution of sweets," the 68-year-old Saha, who has been to four World Cups, added.

At Icchapur, on the banks of Hooghly river on the northern fringes of the city, it was like a festival of sorts at tea-seller Shib Shankar Patra's house, which is famous for being painted in white and light blue colours of Argentina's jersey.

"Hundreds of people started gathering since morning and we danced to drum beats and distributed sweets. In the evening we will have a cake cutting ceremony in front of a giant poster of Messi," Patra, one among the thousands of die-hard Messi fans, said. "We have seen many heartbreaks, like losing the final to Germany in 2014 and in the round of 16, after a closely fought loss to eventual champions France in 2018. So it's an emotional day for us. Hopefully, we will carry on this momentum till next year in the Qatar World Cup," he added.