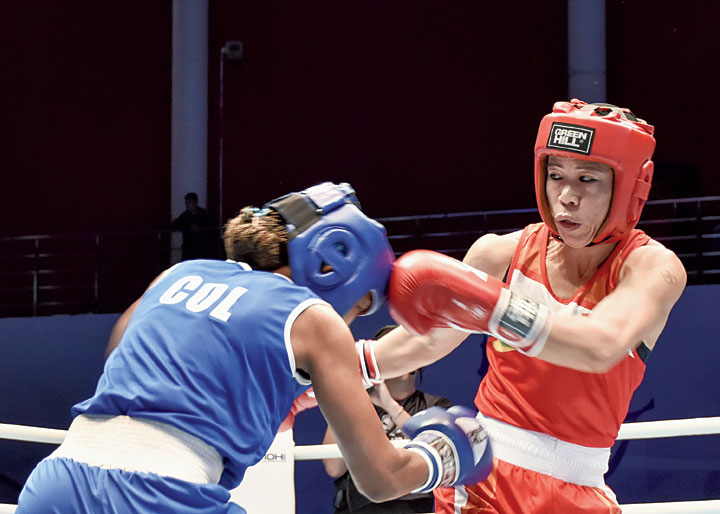 The job is only half done, boxing icon MC Mary Kom said on Thursday after securing an unparalleled eighth medal at the women’s World Boxing Championship and adding to her status as the marquee tournament’s most successful pugilist.

Six-time champion Mary Kom defeated Colombia’s Valencia Victoria in her quarter-final bout at Ulan-Ude in Russia to secure her maiden world medal in the 51kg category, in which she won an Olympic medal back in 2012.

The debutante duo of sixth seed Manju Rani (48kg) and Jamuna Boro (54kg), along with last edition’s bronze medallist and third seed Lovlina Borgohain (69kg), also made it to the medal rounds.

“It was easy,” 36-year-old Mary Kom said when asked about her quarter final contest before getting down to dissecting her performance. “Compared to the pre-quarters, this one was easy. I figured her (Victoria) out quite early in the bout. She was just trying to create an impression by attacking more but I knew I would get my chances.”

In the semi-finals on Saturday, Mary Kom would be up against European Championship and European Games gold-medallist Busenaz Cakiroglu of Turkey. “I have never fought her but then I fought my past two rivals also for the first time here. As I always say, I will try my best, but the result is not in my hands,” she said referring to her pre-tournament assertion that she would only focus on performance, not the result.

The Manipuri, in terms of number of medals won, has become No.1 across both men’s and women’s World Championships. Cuban icon Felix Savon is the most successful in the men’s event with seven medals — six gold and a silver.

Entering this edition, Mary Kom had six gold and a silver in her kitty. “It is difficult to say (what the result would be in the semi-finals) but I think I have the capability to go the full distance and win a gold. Let’s see,” she said.

Rani stunned top seed Kim Hyang Mi of South Korea 4-1, while Boro, an Assam Rifles employee, got the better of Germany’s Ursula Gottlob by a similar margin. Borgohain, on the other hand, pulled off a facile 4-1 triumph over Poland’s sixth seed Karolina Koszewska.

For Rani, her next opponent is Thailand’s Chuthamat Raksat, while Boro will take on top seed Huang Hsiao-Wen of Chinese Taipei. Borgohain’s semi-final opponent will be China’s Yang Liu, who shocked top seed Chen Nien-Chin in her quarter-final clash. However, two-time bronze-medallist Kavita Chahal (+81kg) bowed out after a 0-5 loss to Belarus’ Katsiaryna Kavaleva.