The 19-year-old weightlifter puts pictures of the medel he wants on his phone wallpaper, as a simple way to manifesting his dreams into reality 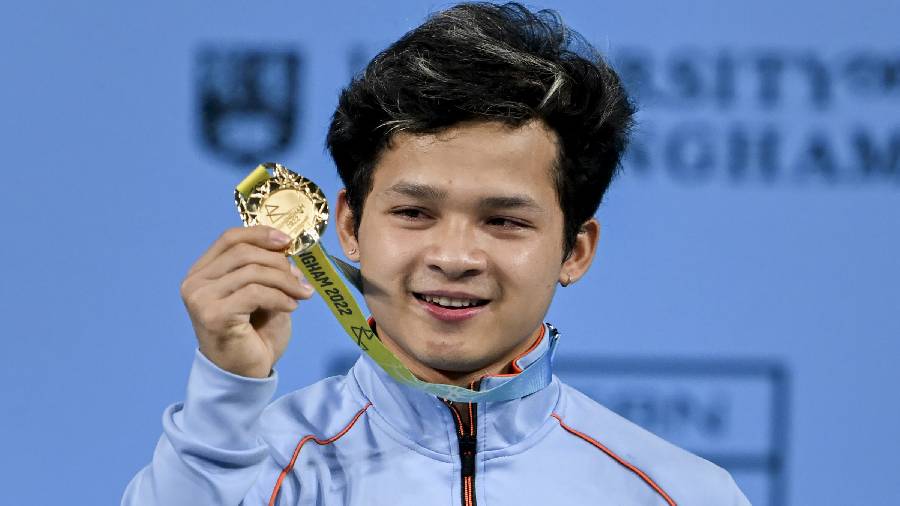 If you want a medal just put a picture of it as your mobile phone wallpaper -- that's Jeremy Lalrinnunga's simple way of manifesting his dreams into reality.

The trick has a 100 per cent success record. It worked at the 2018 Youth Olympics, where Jeremy won India's first-ever gold and then again on Sunday when he claimed the yellow metal in the men's 67kg event at the CWG.

"It's something I did before the Youth Olympics in Buenos Aires and I followed the same for Birmingham," the reigning youth Olympic champion, who also landed the gold on his CWG debut, told PTI in an interaction.

So, what's next? A wallpaper of the Paris Olympic medal when it's unveiled?

Jeremy sports a broad grin, despite the currents of pain he has in his calf muscles.

"Yes, that's (Olympics medal) the target, but it will be a long and tough journey ahead," said the jovial teenager.

The 19-year-old will have to bulk up for the Paris Games as his 67kg category has been scrapped by the International Weightlifting Federation.

The transition would not be easy, I've to move to a higher weight category -- I have to put on six kilograms to shift to the 73kg Olympic category. Keeping my fingers crossed (for Paris), he added.

The God-fearing and highly superstitious Jeremy also sports a huge tattoo on his left forearm, one of a boxer juxtaposed with a wrestler in action one upon the other with some roman numerals below and above that the pattern "MOM" is clearly visible.

"7-7 is my mom's (Lalmuanpuii's) date of birth, while 1988 was the year my dad started boxing," he said about his father Lalneihtluanga, a junior national champion boxer who is now "living his dream through his son".

"Whenever I'm down or having a tough time I just look at them (the tatoos). I'm a firm believer of God and whenever there's a difficult time I dial my mom and ask her to pray for me," he said.

"Just before coming here, I was having a tough time so my mom prayed for me on the phone and it kept me charged up. I'm sure everyone back home will be really happy for me," he said.

Jeremy has had a tough time overcoming injuries that included a knee surgery last year.

He also developed a problem near his spine on his upper back ahead of the World Championship in December.

"I'm a firm believer in God and I think everything happens for a reason, be it success, failure, or an injury. It's about accepting and keeping the process on."

His knee problem also affected his performance at the junior World Championships and Asian Championships, that cost him a place at the Tokyo Olympics.

"I've had enough experience after (not making) the Tokyo Olympics and so it's about working hard and accepting what it is. I'm injured and it's about recovery, rehab and grinding it out again," he signed off.