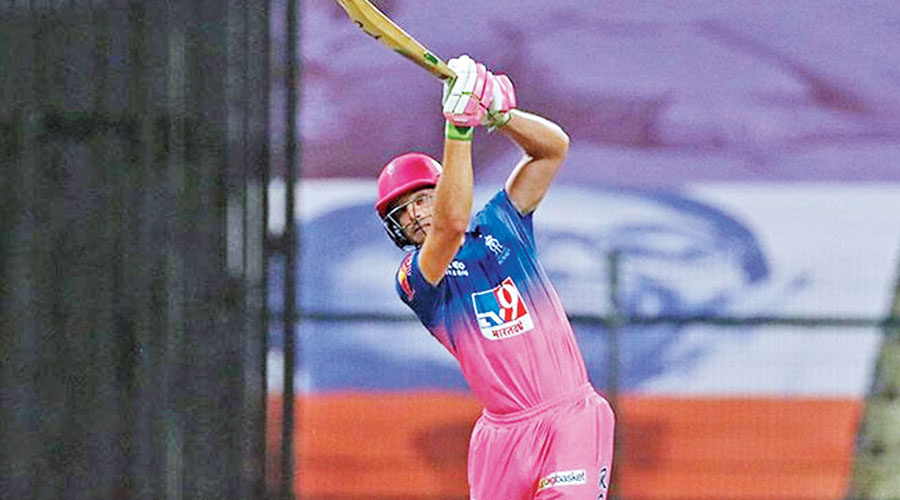 Mahendra Singh Dhoni could not gift himself a win on his landmark 200th IPL appearance as Chennai Super Kings got a seven-wicket thrashing from Rajasthan Royals at the Sheikh Zayed Stadium on Monday.

In response to the Super Kings’ paltry 125/5, the Royals rode Jos Buttler’s superlative 70 not out off 48 balls to reach home comfortably with 15 balls remaining.

The loss meant the three-time champions, who have never failed to reach the last-four stage of the competition, are in danger of being knocked out before the play-offs. Lying at the bottom of the standings with only six points from 10 matches, even winning all of their remaining games may not be enough for the Super Kings, with results of other games also having a role to play.

In other words, Super Kings would need a miracle of sorts to cross the group stage hurdle and it doesn’t look like a season of miracles for them.

For the Royals, it was a much-needed victory and would boost them going forward. More importantly, they have now moved up to fifth in the standings with eight points.

On a wicket where the ball stopped a bit, the Super Kings won the toss and opted to bat first. But with their batsmen lacking intent and application, Dhoni’s team were struggling from the very onset of the game.

Jofra Archer bowled some rippers during the Powerplay, conceding only five off his first two overs and taking the vital wicket of Faf du Plessis.

It was purely because of the Dhoni (28)-Ravindra Jadeja (35 not out) partnership that the Super Kings could somehow go beyond 120, which still was a total way below par.

Deepak Chahar and Josh Hazlewood did try their bit to keep the Super Kings in the game, reducing the Royals to 28/3 by the fifth over. The Royals were under pressure, but captain Steve Smith (26 not out) and Buttler came out of it by knocking it around for ones and twos initially.

Gradually Buttler got into his groove and played some fine strokes. The reverse sweep off Jadeja that yielded him a boundary spoke of his confidence and ease at the crease on Monday.

Coming off a half-century in the previous game, Smith too grew in confidence.

In the end, it turned out to be a cakewalk for the Royals.