Scripting an unbelievable comeback, the Knights now face the Delhi Capitals test at the same venue on Wednesday in Qualifier II 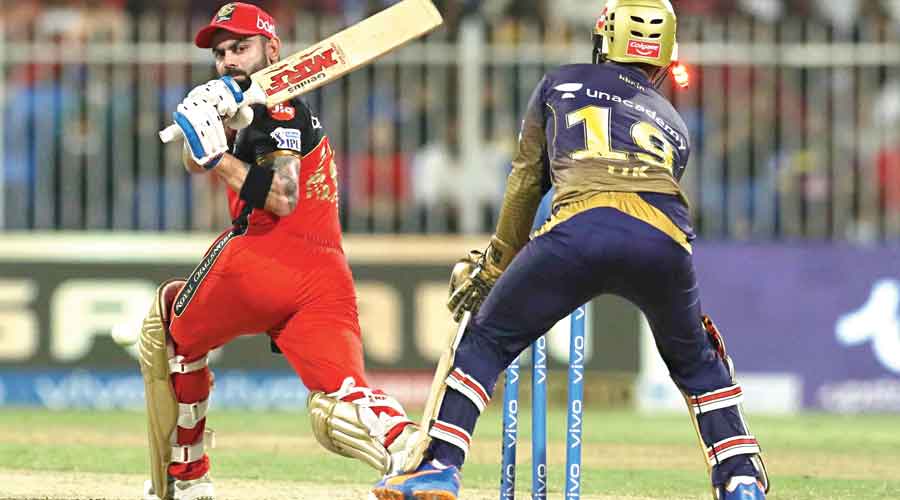 For a player of Virat Kohli’s stature, a strong finish in his final season as captain of a side he has been leading for quite some time would certainly have been befitting.

But not all things fall into place. Individually, Kohli has tonnes of runs in the IPL as captain of Royal Challengers Bangalore, but the crown continues to remain elusive for him. In what turned out to be Kohli’s last appearance as RCB skipper, his team bowed to Sunil Narine, who guided Kolkata Knight Riders to a four-wicket victory in Monday’s Eliminator at Sharjah.

Scripting an unbelievable comeback in the UAE leg of IPL 2021, the Knights now face the Delhi Capitals test at the same venue on Wednesday in Qualifier II, which they need to clear to book a final date with Chennai Super Kings. 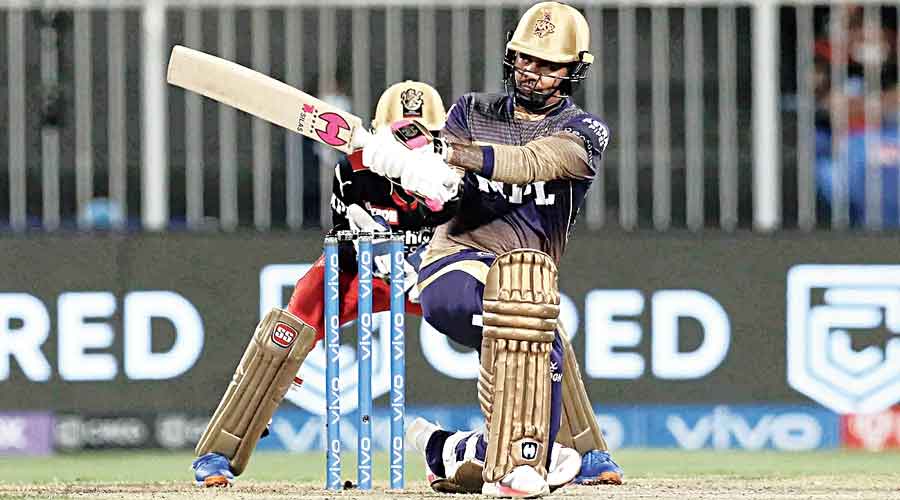 Kolkata Knight Riders’ Sunil Narine sweeping one during his knock of 26 off 15 balls.
IPL

Narine could do no wrong in this knockout game. With the ball first, his dream spell (4/21) earned him the scalps of the pillars of RCB’s batting line-up — Kohli, AB de Villiers, Glenn Maxwell as well as that of the gritty KS Bharat. And then, his stand-and-deliver strokes at a tricky phase of the game tilted the scales in favour of the Knight Riders. Despite late hiccups, they still managed to overhaul RCB’s 138/7 with two balls to spare.

The sluggish Sharjah Cricket Stadium pitch made Kohli opt to bat first after winning the toss. He gave RCB a solid start as they crossed 50 inside the Powerplay, losing just Devdutt Padikkal, who was bowled by Lockie Ferguson.

RCB were poised to set a formidable total, but little did they know that Narine would again go back to being the mystery spinner that opposition batters weren’t comfortable against. The Trinidadian off-spinner didn’t turn the ball miles. He just made use of the sluggishness of the wicket, focusing on beating the batsmen with flight with a little bit of spin. 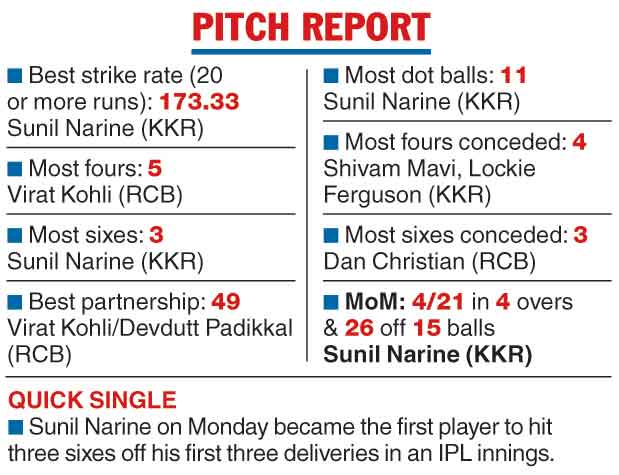 A well set Kohli and De Villiers were dismissed this way, while Bharat and Maxwell got their attempted strokes completely wrong. Narine was well supported by the other spinners as well, with both Varun Chakravarthy and Shakib-al Hasan being economical.

Thereafter, when he was promoted up the order to No.5, he straightaway unleashed three sixes in the 12th over of the game, which yielded the Knights as many as 22 and was also the turning point of the game. At the receiving end was all-rounder Dan Christian.

Harshal Patel, the tournament’s highest wicket-taker, and Yuzvendra Chahal did their best to bring RCB back in the game, and despite Narine’s onslaught, they managed to stretch the game till the final over.

Opener Venkatesh Iyer and Narine didn’t get too many after being dropped, by Shahbaz Ahmed and Padikkal respectively, but if those catches were taken, the situation could have been even tighter for the Knights.