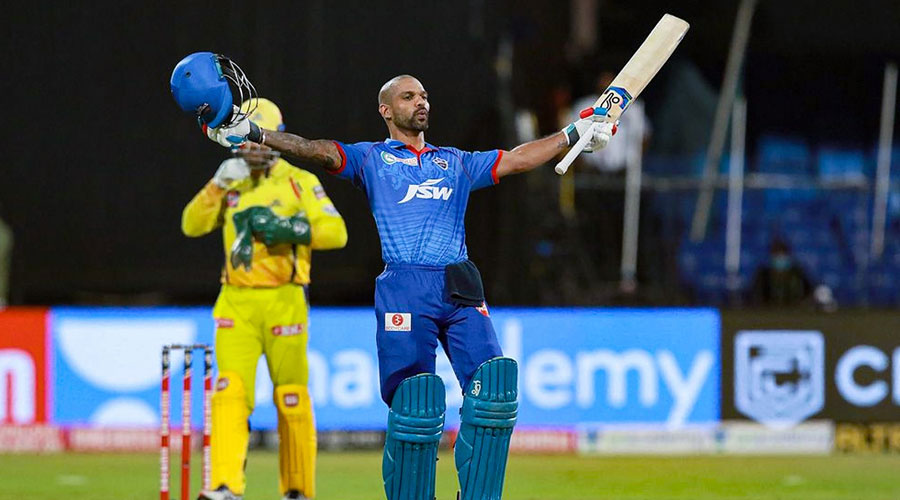 Shikhar Dhawan celebrates after scoring a century against Chennai Super Kings in Sharjah on Saturday.
PTI
Our Bureau, Agencies   |   Calcutta, Sharjah   |   Published 18.10.20, 02:19 AM

Chennai Super Kings let Shikhar Dhawan off on as many as four occasions and the opener duly made them pay, hitting his maiden IPL and T20 century. But it was Axar Patel who stole some of the thunder from Dhawan to help Delhi Capitals get a five-wicket win at the Sharjah Stadium on Saturday.

Getting reprieves on 25, 27, 50 and 79, with Super Kings captain Mahendra Singh Dhoni himself dropping one of those four catches, Dhawan finished on 101 not out off 58 balls as Capitals chased down a tricky 180-run target.

It wasn’t easy though. Sam Curran bowled a superb 19th over for CSK, conceding just four runs, making the equation tougher for Capitals — they needed 17 off the final six balls.

One thought Dhawan would be the key for Capitals with his partner, Axar, having faced just one ball till then. But the all-rounder, a left-handed batsman, smashed his way to glory as Dhawan looked on from the other end. He slammed Ravindra Jadeja for three sixes in the final over that took Capitals home with a ball to spare. Axar remained not out on 21 off 5 balls.

With Dwayne Bravo leaving the field because of fitness issues and the other quicks having completed their quota, it was a choice between Jadeja and leggie Karn Sharma to bowl the last over. With two left-handed batsmen at the crease, one wonders if Dhoni, the master tactician, made the right call of giving the ball to a left-arm orthodox spinner.

Shreyas Iyer’s Capitals wouldn’t mind though, as they are back at the top of the standings with 14 points and are closer to a play-offs berth.

Dhawan’s stroke-making was delightful, with almost all of them being proper cricketing shots, enhanced by quick bat speed and backed up by excellent footwork.

Dhoni couldn’t do much with the bat. It is proving to be a very difficult season for the former India captain. And of course CSK.