Royal Challengers Bangalore take their points tally to 12, featuring among the top three in the standings 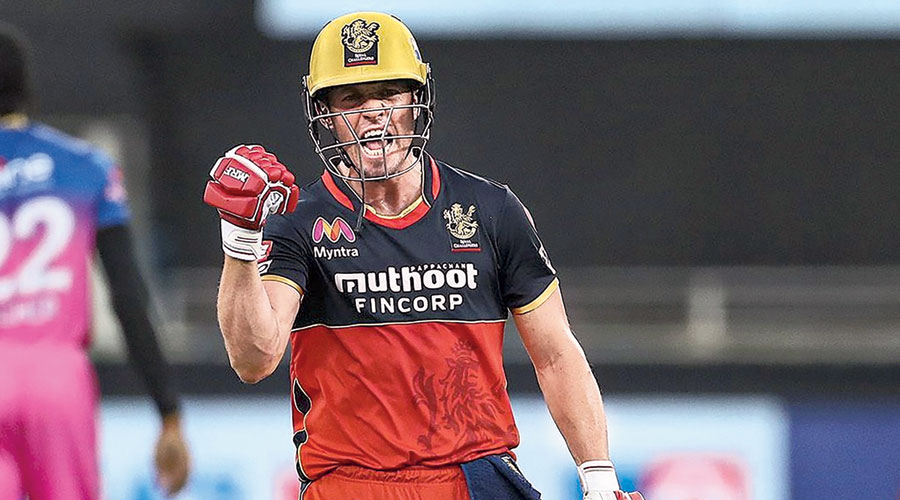 If AB de Villiers is in form, Royal Challengers Bangalore will have few reasons to worry about.

De Villiers produced another master class — unbeaten 55 off just 22 balls — that helped RCB rally to a seven-wicket win over Rajasthan Royals at the Dubai International Stadium on Saturday.

He walked in after RCB lost back-to-back wickets, including that of skipper Virat Kohli, with still 76 required from 41 balls in pursuit of a 178-run target. Leg-spinner Shreyas Gopal and young quick Kartik Tyagi kept a tight line to make the equation even tougher for RCB, but they still couldn’t breathe easy as De Villiers was out there in the middle.

Off the last two overs, they needed as many as 35 for victory. And that’s when De Villiers decided to tee off, smashing Jaydev Unadkat for three sixes off the first three balls of the penultimate over that swung the momentum RCB’s way.

One might as well say Royals captain Steve Smith, who earlier came back to form with a 36-ball 57 that propelled his team to 177/6, erred in not bringing Jofra Archer on for the penultimate over. But from a bowler who’s by no means a rookie and rather a consistent performer on the domestic circuit, a better showing was expected. Unadkat kept bowling the wrong length much to De Villiers’ liking.

The pacer went for 25 off that over and RCB needed 10 to win off the final one. Archer bowled it, but with De Villiers in such good flow, 10 runs were just not enough to defend.

Archer’s line went a little bit awry and De Villiers deposited it over deep mid-wicket for his sixth six that took RCB home with two balls to spare.

And courtesy this win, RCB take their points tally to 12, featuring among the top three in the standings.

Bengal all-rounder Shahbaz Ahmed, on the other hand, made his IPL debut on Saturday. He bowled only two overs but took a fine catch at the deep that sent Smith back.