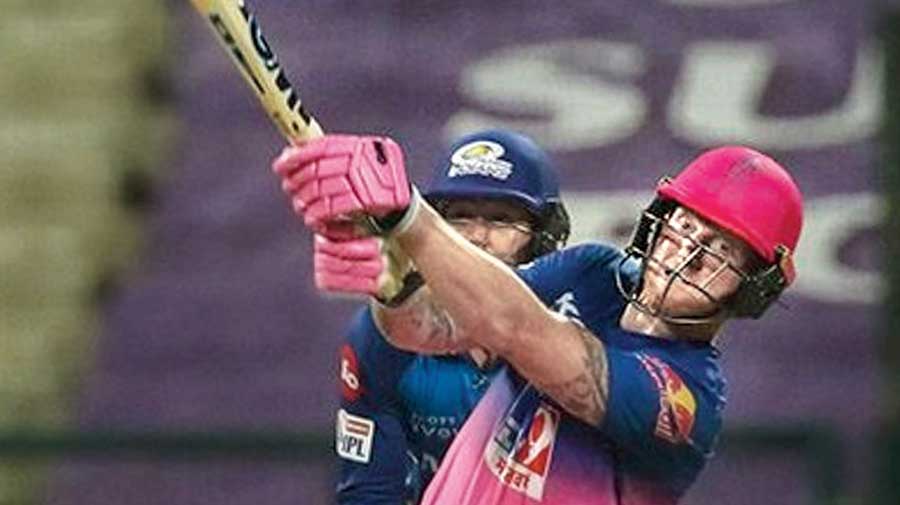 Rajasthan Royals chased down a daunting target to beat Mumbai Indians by eight wickets in IPL 2020 at the Sheikh Zayed Stadium on Sunday.

Ben Stokes smashed a superlative 107 not out with 14 fours and three sixes while Sanju Samson (54 not out) regained his form when his team needed him to as the Royals got past Mumbai Indians’ total of 195/5 with 10 balls to spare.

Exhilarating stroke play by Stokes and Samson during their unbroken 152-run stand for the third wicket hit Mumbai hard even though they had been defending quite well in their previous matches. The reigning champions didn’t bowl too well in spite of getting Royals opener Robin Uthappa and captain Steve Smith early, while conditions in the second half also made shot-making easier.

Besides, the and authority with which Stokes batted helped Samson settle down. The wicketkeeper-batsmen then grew in confidence and began unleashing his array of shots.

Courtesy this victory, the Royals, who were at the bottom going into this game, have moved up to sixth in the standings with 10 points. Importantly, their hopes for making the playoffs are still alive.

Mumbai, however, remain at the top with 14 points.

Earlier, Hardik Pandya displayed his six-hitting ability for the first time this season as his unbeaten 60 off 21 balls propelled Mumbai Indians to a formidable total. Mumbai suffered a mini-collapse in the middle-overs, but late hitting from Hardik, who plundered two fours and seven sixes, and Saurabh Tiwary (34) enabled them to amass 74 runs in the last four overs.

Tiwary and Hardik shared a 64-run stand for the fifth wicket. Tiwary hit Jofra Archer (2/31) for two fours and a six in the 17th over, while Hardik hammered four sixes off Ankit Rajpoot in the 18th over, which went for 27 runs.

Hardik launched into Kartik Tyagi in the final over, smashing him for three sixes and two fours. His blitzkrieg, however, didn’t prove to be enough as Stokes and Samson turned out to be even better.