The KKR had the final laugh, snatching a three-wicket win in the low-scoring game at the Sharjah Cricket Stadium 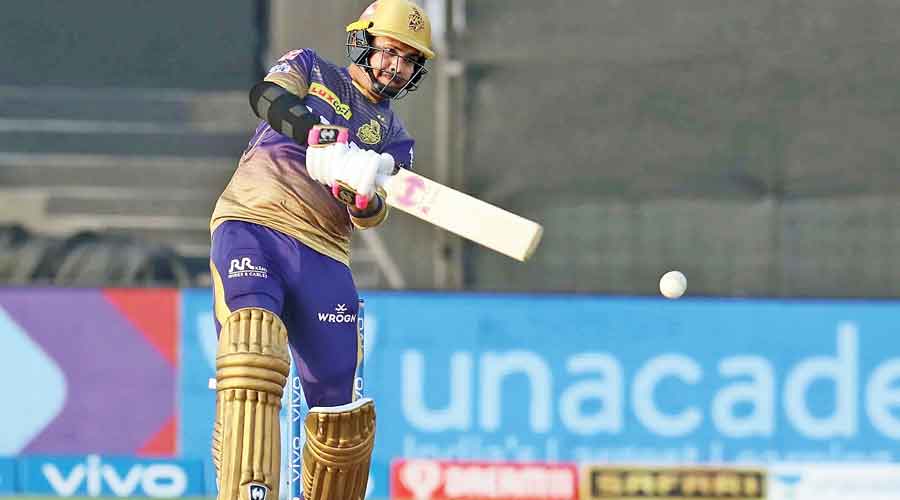 Sunil Narine, who starred for Kolkata Knight Riders with both the ball and bat, during his 10-ball 21 against Delhi Capitals in Sharjah on Tuesday.
Picture courtesy IPL
Sayak Banerjee   |   Calcutta   |   Published 29.09.21, 01:35 AM

T20 cricket is not always only about the big hits, at times it can also be a test of patience, a battle of nerves. Tuesday’s Delhi Capitals-Kolkata Knight Riders was one such game. The Knights had the final laugh, snatching a three-wicket win in the low-scoring game at the Sharjah Cricket Stadium.

Restricting the Capitals to a meagre total of 127/9 after captain Eoin Morgan won the toss and opted to bowl, the Knight Riders too found the going to be quite tough till Nitish Rana (36 not out) and Sunil Narine (21) shared a brisk 26-run stand for the sixth wicket to open the route to victory.

Six runs were still needed when Narine departed, with Rana having only the tail to assist him. But he stayed sensible and eventually hit the winning runs off Anrich Nortje to take the Knights home with 10 balls to spare.

The win took the Knights’ tally to 10 points from 11 matches, keeping their prospects of making the playoffs very much alive. Besides, a positive net run rate (+0.363), thanks to the turnaround they have been able to make in the UAE leg of this IPL by winning three of their four games so far, would also help the Knights breathe easier.

The Capitals, on the other hand, remain second with 16 points, having three more matches to play in the league phase. A win would have made Rishabh Pant’s boys the first team to reach the last-four stage, but they have to wait longer because of the resurgent Knights.

The heat was on the Knight Riders when they lost Shubman Gill and skipper Morgan in a space of just three balls, off Kagiso Rabada and Ravichandran Ashwin, respectively in the 11th and 12th overs of the run chase.

The required rate had crept up above seven after former captain Dinesh Karthik joined Rana at the crease. Given the nature of the pitch, that was as good as needing 10 or more off every over on a more batsman-friendly wicket.

But Rana’s calculated risks paid off in the 14th over, which yielded the Knight Riders as many as 20 runs. Backing his abilities, Rana took on off-spinner Lalit Yadav, slamming the latter for two consecutive maximums while Karthik too hit the bowler for a boundary.

Those hits eased the equation for the Knights.

Pacer Avesh Khan (3/13) brought Delhi back in the game, dismissing Karthik in the very next over, conceding only two runs. The situation looked tight again for the two-time champions, but fortunately for them Rabada overstretched in the second ball of the 16th over and that affected his composure.

Narine, a quite capable batsman on his day, smashed the South African pace spearhead for 19 off the next five balls, including two sixes and a four. Rabada kept bowling in Narine’s arc and the left-handed batsman gleefully hammered them.

That over cost the Capitals 21 and from thereon, their chances of winning were as good as gone.

As he did in the previous game versus Chennai Super Kings, Narine was spot-on with the ball too. The conditions in Sharjah suited his kind of bowling and he responded with 2/18, including the prized scalp of an in-form Shreyas Iyer. Even a set Pant (39) couldn’t score much off the off-spinner, who made a big difference to the outcome of the game.

With Prithvi Shaw injured, the new opening pair of Steve Smith and Shikhar Dhawan got the Capitals off to a solid start, till Lockie Ferguson (2/10) gave the Knight Riders a breakthrough. Ferguson’s hamstring niggle restricted him to bowling just two overs, but after accounting for Dhawan, the New Zealand quick also dismissed Smith (39), who struggled to give momentum to the Capitals’ innings.

With Ferguson unable to complete his quota, opener Venkatesh Iyer (2/29) performed the part-timer’s role impressively, striking twice and not giving much away.