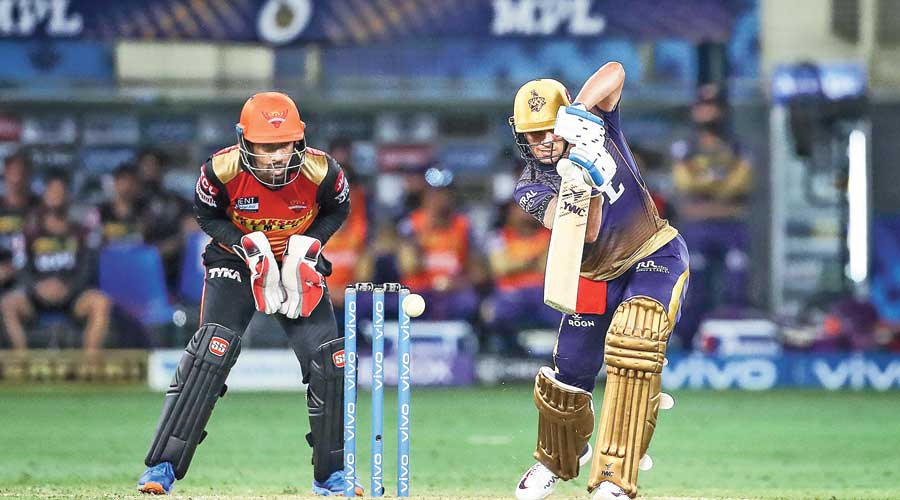 Kolkata Knight Riders, without two of their key players in Andre Russell and Lockie Ferguson, proved too strong for the pathetic Sunrisers Hyderabad at the Dubai International Stadium on Sunday.

The Knights first tied up the Sunrisers batsmen forcing them to a below-par total and then treaded cautiously in their chase to register a comfortable six-wicket win.

Punjab Kings’ loss to Royal Challengers Bangalore earlier in the day at Sharjah came as a relief to Eoin Morgan and his team going into the game. That perhaps helped their confidence as well. With this much-needed win, the Knight Riders are now on 12 points with a still a game to play and, more importantly, have extended their lead at No.4 to be the favourites to occupy the fourth and last play-off slot.

Their net run-rate too is on the positive (+0.294), much better than that of Punjab, Rajasthan Royals and Mumbai Indians, all three of whom trail the Knights by two points.

The wicket in Dubai was by no means like that of Sharjah. Yet the Sunrisers, opting to bat first after winning the toss, again put up a very poor display. 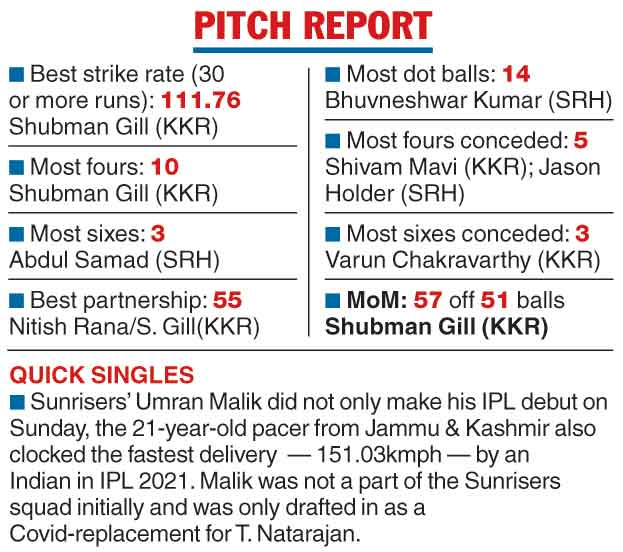 The Knight Riders bowlers settled down easily and choked the rival batsmen further as all that the Sunrisers could manage was a meagre 115/8.

Alongside Southee (2/26), who has done a fair job as Pat Cummins’ replacement, his new-ball partner Shivam Mavi and spinner Varun Chakravarthy also struck twice to make the going even more difficult for Sunrisers.

Shakib-al Hasan (1/20), coming in for Tim Seifert, vindicated the team’s faith in him as he ran skipper Kane Williamson out with a superb throw to further dampen the Sunrisers’ chances.

One big positive for the Knights was opener Shubman Gill (57) regaining form when it mattered. The Sunrisers bowlers made the run chase as tough as possible, but Shubman’s sensible batting eased the situation for Morgan’s team. In the process, Shubman helped himself to his first half-century of this IPL season.

Some of the shots Shubman played were a reflection of his class and ability befitting of an ideal top-order batsman. His departure against the run of play did bring about a bit of tension in the Knight Riders camp, but a steady Dinesh Karthik took them home with two balls to spare.