We are chatting with elbow injury experts and the government has okayed his therapy, according to source 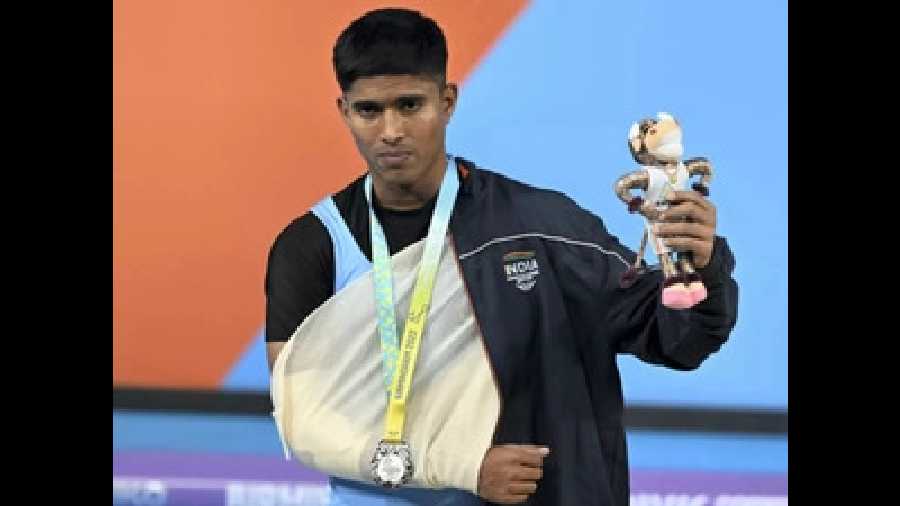 Weightlifter Sanket Mahadev Sargar, India's first medallist at the Birmingham Commonwealth Games, will stay back in the UK for treatment of the UCL injury he suffered on way to securing a silver in the 55kg category.

A Ulnar Collateral Ligament (UCL) tear takes at least three months to heal. Sargar had come to the medal ceremony with his right arm wrapped.

"There were two options with Sanket. To take him back to India or treat him here. After initial assessment, we thought it is best we treat him in the UK itself. We are chatting with elbow injury experts and the government has okayed his treatment," a team source told PTI.

Sanket made three clean attempts in the snatch, lifting 107kg, 111kg, and 113kg respectively. He had a neck-and-neck fight with Malaysia's eventual gold medallist Aniq Kasdan, who also lifted 107 kg in his first attempt but failed to register a clean lift in his next two.

Sanket then set the bar by lifting a total of 248kg. However, his second attempt resulted in a nasty elbow injury.

However, in a stunning move, Sanket returned for a third attempt but that only aggravated his injury and he failed to complete the lift.

Weightlifting has helped India get a bagful of medals here including a gold from Mirabai Chanu, Jeremy Lallrinnunga and Achinta Shueli.