Team India lose the game by 32 runs, with Australia ensuring that the fourth ODI will assume significance 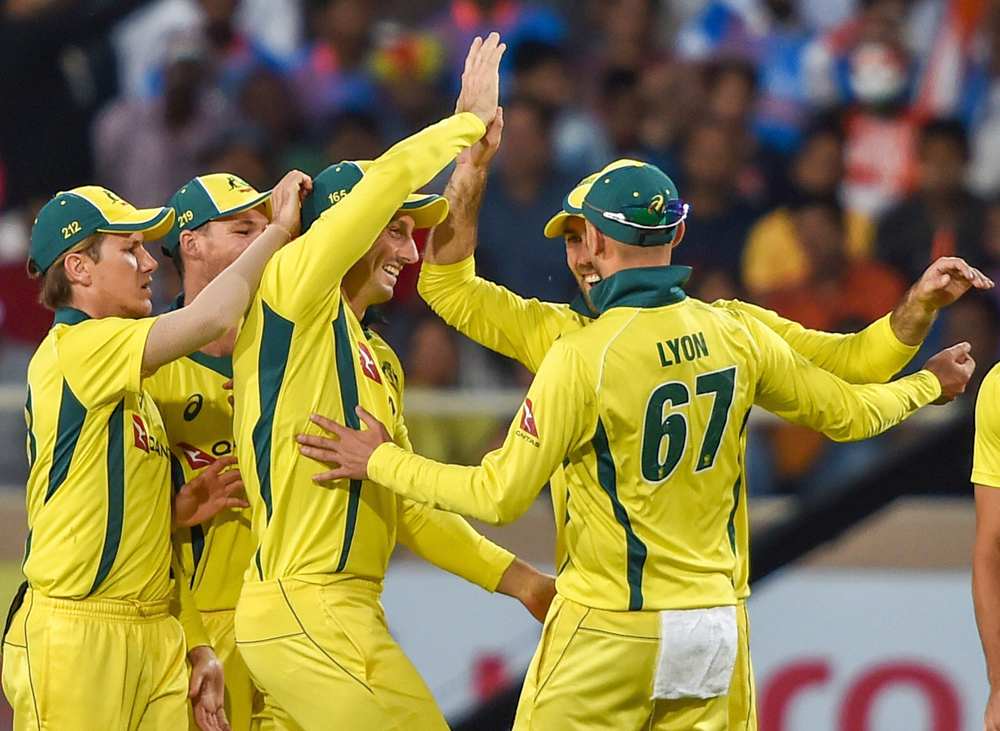 The determination, particularly in captain Virat Kohli’s approach, showed when Mahendra Singh Dhoni handed him the ‘special’ cap and he handed it over to the former India skipper before the toss in the third ODI, at the JSCA International Stadium, on Friday.

Team India played the game, wearing specially designed cap of the camouflage shade issued to Army units. But India’s performance wasn’t at all a special one as they lost the game by 32 runs, with Australia ensuring that the fourth ODI will assume significance.

Kohli’s (123 off 95 balls) response after Australia reached 313 for five on being put in to bat was that of a true soldier.

While Dhoni (26), despite his short stay out there in the middle in what could be his last international appearance at his hometown, gave him able support after India were wobbling at 27 for three inside seven overs.

But Adam Zampa silenced the boisterous fans by yanking out both Dhoni and Kohli, quite against the run of play, along with accounting for the well-set Kedar Jadhav (26). With Pat Cummins triggering a top-order collapse by removing Rohit Sharma and Ambati Rayudu in quick succession, and Jhye Richardson (replacing Nathan Coulter-Nile, who flew back home for the birth of his second child) prolonging Shikhar Dhawan’s off form, the task had already looked uphill for India.

And then Zampa’s blows virtually guaranteed the Aussies a much-needed win to stay alive in this ODI series. India were all out for 281 with 10 balls to spare. Cummins, Richardson — impressive in his first game on Indian soil — and of course, Zampa, finished with three wickets apiece for the visitors.

As a perfect reply to Usman Khawaja (104)’s maiden ODI hundred and Aaron Finch’s form-gaining 93, Kohli was out to take India home on his own. The dominance with which he smashed one boundary after another left Australia clueless. Kohli’s authority over the bowling attack was such that Australia seemed to be running out of ideas.

In other words, he churned out another surreal, magical knock to record a second straight century in the series, which was also his 41st in the format. Young Vijay Shankar (32) too supported Kohli really well during their sixth-wicket partnership.

Kohli did enjoy a slice of luck when wicketkeeper Alex Carey dropped him on 98 in the first ball of the 35th over, bowled by Glenn Maxwell. And in the same over, he brought up his century with a two.

It was all heading Kohli and India’s way. However, luckily for Australia, Kohli, having taken a toll on almost all the loose stuff Zampa delivered, missed the line of one to be knocked over. The momentum then again swung back in Australia’s favour and they ensured no botch-up thereafter.

Earlier, pacers Jasprit Bumrah and Mohammed Shami covered up commendably after a rare off-day for the India spinners, together with poor ground fielding, as the hosts ensured Australia didn’t get more than 313 for five despite a 193-run opening stand between captain Finch and MoM Khawaja, who got a reprieve when on 17.

Attempted a reverse sweep off Ravindra Jadeja, Khawaja couldn’t middle it. But fortunately for him, Dhawan dropped a relatively easy chance at deep backward point. Rubbing salt on the wound, Khawaja finished things off in the over with another boundary, punching through the covers.