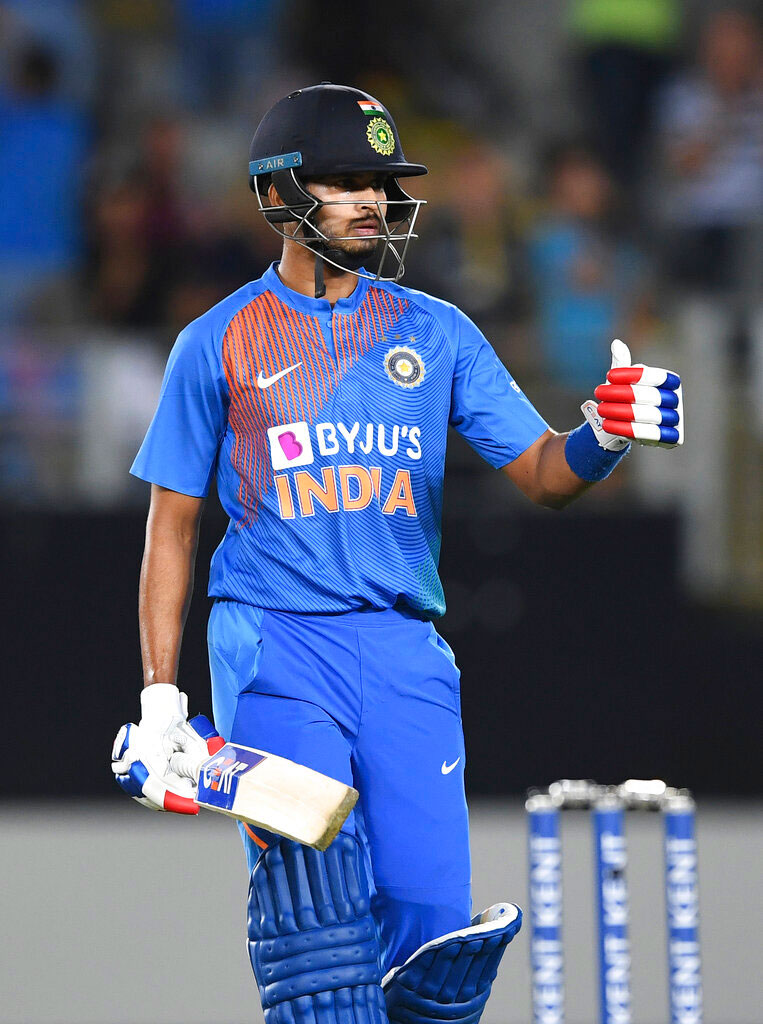 Shreyas Iyer, with a strike rate of 200 but a cool head, helped India to a smart victory in the first T20I of the five-match series against New Zealand at Eden park in Auckland on Friday.

Iyer, who many believe to be the middle-order solution that India have been searching for quite some time, played an unbeaten innings of 58 off 29 balls as India chased down a target of 204 in 19 overs.

The other contributors in the Indian innings were KL Rahul (56 off 27 balls) and captain Virat Kohli (45 off 32 balls).

Iyer, batting at No.4, enjoyed his time at Eden Park.

“It’s amazing coming overseas and it’s a really good feeling to win the game and being not out. We had lost two quick wickets and it was really important to build a partnership. We knew the ground is short and we could cover the run rate at any time. It was an amazing experience… This is my first time at Eden Park, looking forward to the same crowd and the same support again for the next game,” said Man of the Match Iyer.

Rahul, the other half-centurion in the Indian innings, was all praise for Iyer.

“It was a fantastic finish. We have seen for a while that in crunch situations, we have lacked someone who can to take the team through and win. But the way Shreyas, Shivam (Dube) and even Manish (Pandey) started striking the ball from the moment they went in was excellent. When you’re chasing over 200, you need a boundary in every over.

“It was good to see that whoever was walking out was doing so with the intent to do that. And the execution was very impressive today. That is very heartening to see. The way Shreyas finished it off, the way he celebrated very calmly after reaching his half-century… he finished the game and then celebrated.

“With the responsibility of being an IPL (Delhi Capitals) captain, Shreyas has understood how to finish the games. He showed that responsibility in the last ODI too and here too. Those are great signs for us,” said Rahul.

Rahul, too, is “loving” his new role in the Indian team. The opener is doubling up a wicketkeeper for the Kohli brigade.

“I enjoy staying behind the stumps and it also gives me a great idea about how the pitch is playing, and I can pass on that message to the bowlers and the captains regarding field-settings and everything. As a ’keeper, that’s also your responsibility to stay active and pass the message on to your captain as to what lengths are better and what I feel we can do better.”

Rahul is of the opinion that keeping wickets helps his batting as well.

“As a batsman as well, after keeping for 20 overs, you get a fair idea on what are the good shots on a particular kind of wicket. So I’m enjoying the responsibility and so far so good for me.”

The Karnataka batsman claimed that he has returned wiser after he was dropped from the team last year.

“That’s exactly what I’ve learnt in the last one-and-a-half years, that this is my game, where I play cricketing shots. I’ve been blessed with shots all over the ground but getting into good positions and striking the ball with a good technique is my strength.

“If I can carry forward that belief and mind-set into each innings it’ll help me more and I can be more successful and in return I can be more consistent for the team’s sake,” he added.

While he was out of the India team, domestic cricket helped Rahul sort out issues.

“I’ve been part of the team for a long time and on a lot of tours, I just go and sit outside. I don’t get game time. You need to be in the middle and get runs and that’s the only way that I could have got my confidence to go back, play some first-class cricket, less pressure and I could focus on myself, my skill and my cricket.”

He had mentioned about the need for better scheduling of matches on Thursday, and on Friday captain Kohli explained how they didn’t let jet lag affect their performance.

“We enjoyed this. Landing two days before and playing a game like this, it was fantastic... This sets up for the whole tour for us. It felt like 80 per cent support was for us and the crowd was right behind us. You need that sort of push chasing 200 plus. We never spoke of the jet lag in the team. We didn’t want any excuse. We had a really good series against Australia and we took that confidence in here,” Kohli said at the post-match presentation ceremony.

Though they won the match, the Indian bowlers were thrashed all around Eden Park by the New Zealand batsmen. Kohli, however, sounded sympathetic to them.

“You can’t be harsh on anyone on this kind of pitch. I think we did well in the middle overs, to restrict them under 210 was a good effort.”