ICC Cricket World Cup 2019: Eoin is not thinking of the future 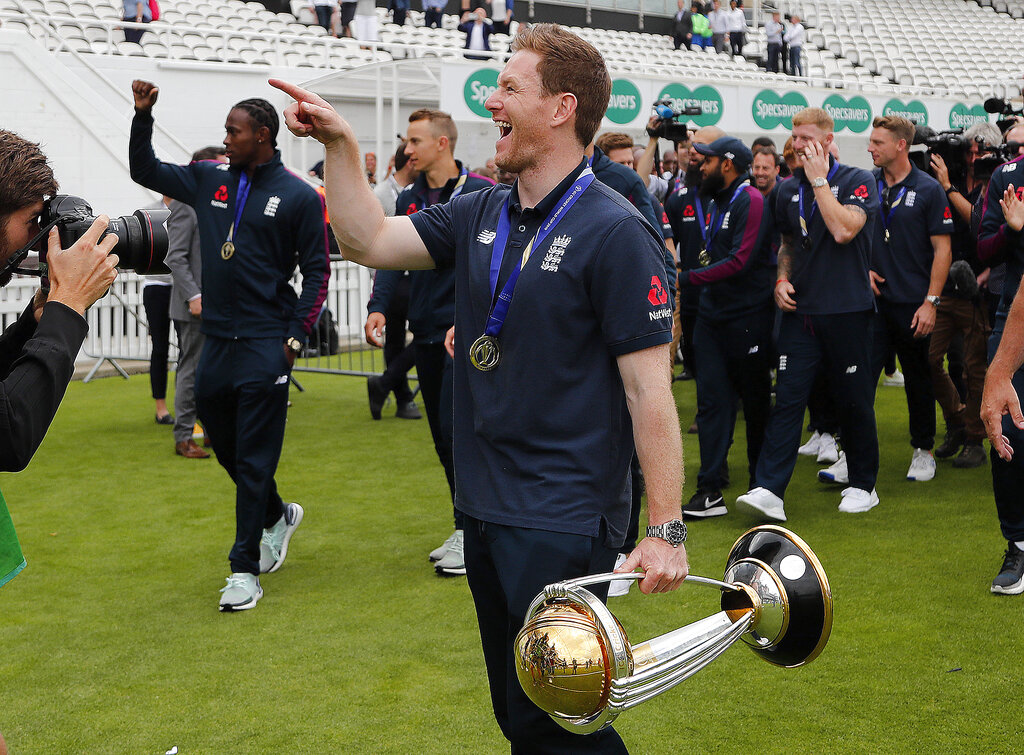 Eoin Morgan is yet to decide whether to remain England’s white-ball captain following their World Cup triumph.

Morgan has led England’s remarkable turnaround in ODIs, culminating in them winning the 50-over World Cup for the first time last Sunday.

The 32-year-old said it would be a “big commitment” to continue until the 2023 World Cup, with next year’s T20 World Cup being a “more realistic” target.

“I don’t think I’m in a good state to decide (on future) at the moment… Just simply that I haven’t had a chance to get away from the madness and the craze of winning the World Cup,” Morgan told BBC Sport.

“I’ve not been able to get into a logical mindset and actually ask myself a couple of questions. It’s taken a huge amount out of me, both mentally and physically.

“So, once everything calms down over the next couple of months, I’ll hopefully come to a decision as at the forefront of it will be my family and the team.”

Asked if England’s Cup triumph and the remarkable circumstances in which they won it had sunk in yet, Morgan replied: “No, I think it will take time. The madness has been taken to a new level everywhere I go.

“I didn’t sleep the night after the game because I couldn’t. I went to bed about 4am and I couldn’t switch off.

“I was up for another three hours, just trying to understand what had happened in the game, the stages of the game where both sides made mistakes and absolutely none of it has sunk in.”

Morgan hopes the legacy of the triumph is that England will become regular contenders in future World Cups.

“What would make the last four years worth it would be to go into the next World Cup, and the one after, with England considered genuine contenders. We don’t have to be hot favourites, but on a consistent basis you raise the belief and ambition within the country and the cricketers themselves,” he emphasised.

Morgan spoke on the sidelines of the inaugural Euro T20 Slam player draft that took place at the Heathrow Airport in London on Friday.

The competition is a new European 20-over league, which will happen in the Netherlands, Scotland and Ireland from August 30 to September 22.

The Ireland-born Morgan will play for and lead the Dublin Chiefs in the competition. It will be a homecoming of sorts for the north Dubliner.

“I am proud and delighted to participate in the inaugural Euro T20 Slam.

“You only have to look at the calibre of international and local stars, who have been selected to see that it’s going to be an electrifying tournament across three new T20 locations in northern Europe.

“There’s huge interest in the Euro T20 Slam and the teams are really taking shape. It’s going to be incredibly competitive and I can’t wait to get going.

“It’s important to lay a platform to give people opportunities to play on a more consistent basis against some of the best players in the world. It’s brilliant and I think there’s a market for it as well.”

Pakistan’s Mohammed Aamer and Babar Azam, along with Irishmen George Dockrell and Kevin O’Brien are among the players in the Dublin Chiefs squad. Daniel Vettori will be the head coach of the team.

Former India Test captain and head coach Anil Kumble is one of the board members of the league’s advisory committee.